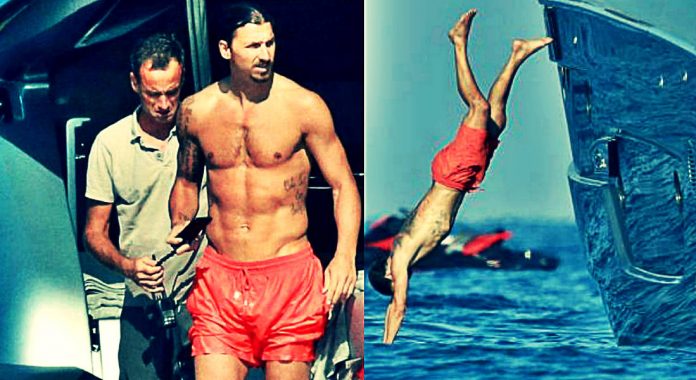 Zlatan Ibrahimovic is looking in great shape as he steps up his recovery from a horror knee injury – as he’s spotted on holiday with partner Helena Seger.

Ibrahimovic damaged his ACL back in April of this year and was ruled out of action until at least January 2018.

However, the star showed off his toned body on his luxury yacht – even springing off the side to perform a dive, suggesting his knee is certainly holding up to the challenge of everyday life.

As well as enjoying a dip in the warmth of the Mediterranean Sea, Zlatan was spotted relaxing with partner Helena and chatting with Raiola.

The super-agent has no doubt been busy with Zlatan, as Manchester United and AC Milan do battle for his signature as soon as he’s declared fit for a return.

The Serie A giants recently claimed they have “Zlatan Ibrahimovic fever” as they attempt to lure him into a move back to the San Siro.

Already aged 35-years-old, many felt the ligament damage would be too much to recover from.

But nothing stops Zlatan… as he’s shown this summer.

Not one to mope around the house as he faces missing out on all footballing action until at least the beginning of 2018, he’s kept himself extraordinarily busy.

The Swede superstar stunned the football world when he revealed a video of himself back in training.

This was no light workout though… he was lifting some heavy leg weights as he shows he may be ready to return to action well before the original estimate.

At the end of the video, Ibra said: “The king of football is coming back.

Not long after, he compared himself to King Kong, in an incredibly ripped selfie.

Zlatan was also honoured by his home country in the most incredible way, being revealed as the new face of the Swedish 1000 Krona note.

On top of that, he has even released his own fragrance and his own gaming app – where he takes on the role of superhero.