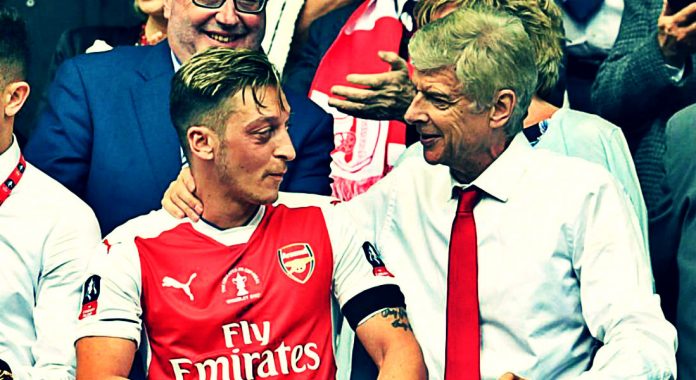 Arsenal believe that Mesut Ozil will sign a new deal after having made a huge breakthrough in the negotiations to tie down the German superstar.

The Gunners have offered Ozil a new £280,000-a-week and the former Real Madrid man has given an impression that he is set to accept the offer.

Ozil’s representatives are now holding talks with the Arsenal hierarchy and sources reveal that the discussions between the board and Ozil’s entourage have been “very positive”.

Ozil has not been linked with a move to any other club this summer.

His representatives had been trying to find another club in Europe but they have not found any potential suitors on that kind of money.

The Gunners are also trying their best to tie down fellow contract rebel Alexis Sanchez.

It seems that Alexis Sanchez is ready to see out the final year of his Gunners contract.

Sanchez was linked with a £45m move to PSG, but the Ligue 1 giants have already splurged £200m to sign Neymar on a world-record move and it is seems that the French club have dropped their interest in the Chilean.

Meanwhile, Arsenal have made it clear that they will not sell Sanchez to league rivals Manchester City, who are waiting with open arms to sign the Chilean.

However, the Gunners now look like they are set to secure at least one of their stars and are confident that Ozil will extend his contract this season.

Wenger shocked everyone when he insisted that having players in the last year of their contracts was ideal.

Ozil, Sanchez, Oxlade-Chamberlain and Jack Wilshere have all entered the final 12 months of their Gunners contract.

This means that the North London club are facing the risk of losing a number of key players without recouping any money for them.

Meanwhile, Ozil has returned to training with Arsenal.

The German superstar is all geared up to feature in Arsenal’s league opener against Leicester City on Friday.

But Sanchez is out with an abdominal strain.

The Chilean forward is set to miss Friday’s clash with Leicester and could also be sidelined for their trip to Stoke a week later.