Who will take the upper hand? 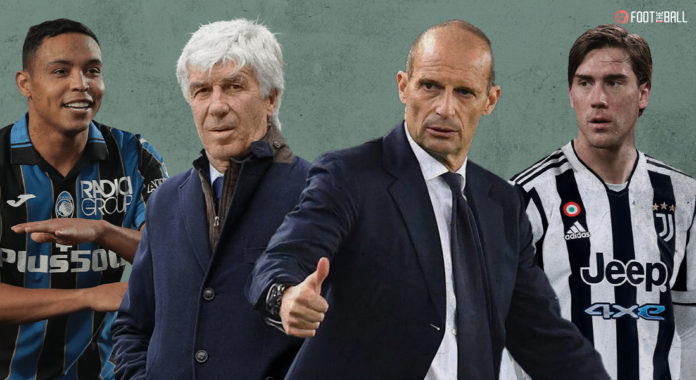 Juventus visit Atalanta in a crunch fixture in the race for the top four with just two points separating the two teams. Gian Piero Gasperini’s Atalanta are currently fifth behind Juventus but have a game in hand. A win for either side in this six-pointer will be a major boost.

Atalanta lost to Cagliari 2-1 at home last time out, compounding their struggles at home. La Dea have the worst home record of any side in the top half of the league while remaining unbeaten away from home. They also lost 3-2 to ten-man Fiorentina in the Coppa Italia in midweek.

Juventus welcomed their new signings in style with a 2-0 win over Verona with big money January arrivals Dusan Vlahovic and Denis Zakaria getting on the scoresheet. The Old Lady overcame Sassuolo in the cup 2-1 on Thursday.

The match will be a good barometer of Juve’s progress over recent weeks with the reverse fixture ending 1-0 in Atalanta’s favour.

Gasperini was just welcoming back Duvan Zapata from an injury last weekend but the striker suffered another problem which has ruled him out for a few weeks. He joins Aleksey Miranchuk, Giuseppe Pezzella and Bryan Cabezas in the treatment room. Jose Palomino is also a doubt for the match after experiencing muscle discomfort.

Worrying news on Atalanta’s Duvan #Zapata.
Will now have surgical consultation after re-injury to left groin.
Have been media reports of possible adductor tendon tear/avulsion that could require surgery & long downtime.#Atalanta #SerieA https://t.co/4x0T95ZGnC

Goalkeeper Juan Musso received a red card against Cagliari and will be suspended but Rafael Toloi will be available after serving his Coppa Italia suspension against Fiorentina. Josep Illicic remains unavailable due to mental health issues.

Juventus have fewer injury issues but they still have a couple of major longer term absentees in Giorgio Chiellini and Federico Chiesa. Alex Sandro and Federico Bernardeschi are doubts after missing the last couple of matches while Moise Kean is available after serving a suspension in the cup in midweek.

Luis Muriel has been Atalanta’s super-sub for the past few years but in the absence of Zapata and Illicic, he is expected to lead the line against Juve. His combustible finishing ability and relentless running makes him a big threat in Gasperini’s side and he will be hoping to get a 10th direct goal involvement on Sunday.

The Colombian was on the bench against Fiorentina and only came on when they were chasing a goal. His fresher legs could make the difference against the third best defence in the league.

Juventus lacked goals in the first half of the season and they rectified that in January by signing Serie A top scorer Dusan Vlahovic. The Serbian scored on his debut and probably should have had a couple more given the dangerous positions he was getting himself into.

Vlahovic looked sharp and his partnership with Dybala and Morata will be key, especially given the latter two’s propensity to feed off a more classical number nine. They will find plenty of space thanks to Atalanta’s playing style but it will be a matter of whether they can take their chances or not.

The pressure is on both sides as they head into this fixture – back-to-back losses for Atalanta and the game-in-hand which could see them drop into fifth for Juve. There is still a long way to go in the season but this could be a pivotal moment in the race for Champions League football. One can expect an entertaining match but FootTheBall predicts the two sides will cancel each other out, Atalanta 2-2 Juventus.