Simeone vs Rangnick set for action! 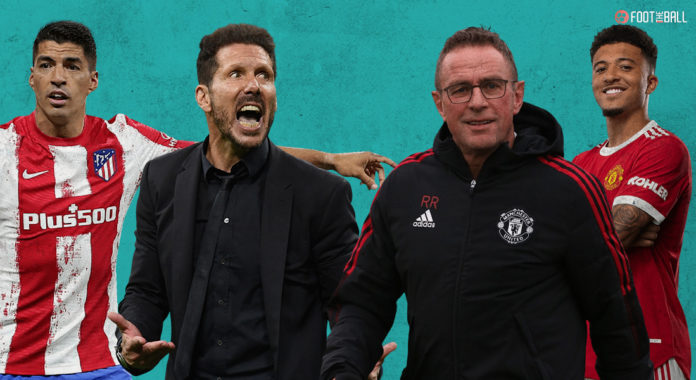 The Champions League action rolls on with another tasty clash in the round-of-16 between Atletico Madrid and Manchester United on Wednesday night.

The Spanish champions are having an up-and-down season, sitting in 5th-place and 15 points behind league leaders Real Madrid. They have won three of their past five games but the major area of concern has been the backline. Diego Simeone’s famed defensive strength has taken a major beating, with Atletico having conceded the most goals (34) amongst the top-ten teams.

Even in the Champions League, they needed a last match victory over Porto to progress as runners-up, with more goals conceded (eight) than scored (seven). The frontline has been in good form, however, and given their opponent’s own woes at the back, Atletico have decent chances of scoring.

The Red Devils have finally started pulling away from the chasing pack to cement their place in the top-four. Three wins and two draws from their last five league matches constitute a good return but like Atletico, the major issue has been the defence. United have made a habit of conceding in the second-half as evidenced by the four goals they shipped during this stretch.

Ralf Rangnick has sought to calm fears, stating that the players know what is to be done in those situations but that it’s yet to be seen on the pitch. The good news for United is that Jadon Sancho has finally started recapturing his old form, constantly being the most dangerous man for the opposition. If Cristiano Ronaldo and Bruno Fernandes can combine together with the frontline regularly, Atletico’s porous defence can be in a lot of trouble.

Matheus Cunha is ruled out for almost a month due to knee injury, joining new signing Daniel Wass on the sidelines.

Edinson Cavani’s ongoing fitness problems mean that a call on whether he is in the squad will be a late call by Rangnick.

An old nemesis for United could once again haunt the English side. Luis Suarez is still firing on all fronts with 11 goals and two assists across all competitions. He scored an absolute worldie with his left foot from almost the halfway line against Osasuna, giving everyone a reminder of how class is permanent. Indeed, he does not have the pace of old but Suarez’s instincts inside the penalty box is absolutely world-class.

WHAT A FINISH FROM LUIS SUAREZ 😲🔥 pic.twitter.com/nve9B28IaX

United’s backline can be breached well enough as this season has shown and Suarez is the perfect attacker who can take advantage. With creative players supplying the balls, the Uruguayan can feast with both his feet and head. The fact that he has an uncanny ability of knowing where the pass may land up gives him an added edge. Moreover, he can also shoot from distance and will give David De Gea some practice in goal as well.

Sancho getting back to his Borussia Dortmund levels has been one of the highlights of the recent weeks. Having played him across both flanks since arriving, it does seem like Sancho fits best on the left side. That allows him to cut inside onto his right foot and either shoot or cross for teammates inside the box. Furthermore, his extreme pace and bag full of skills can leave any defence befuddled, with Atletico’s backline knowing they have to be on their toes always.

Jadon Sancho picked up two assists yesterday but in his last five games he has created many good opportunities that could have been assists on a different day.

His current form has been excellent. pic.twitter.com/trXi7F40Tu

Given the fact that Sime Vrsalijko is not quite upto Kieran Trippier’s level, Sancho can get by him more often than not. He can also switch sides as it becomes necessary like his bursting run and cross for Bruno Fernandes from the right side against Leeds United. Rangnick knows that Sancho can get the better of centre-backs on most days and with world-class attackers around him, he has the chance to make a real impact.

This tie was never supposed to happen but a redrawing process by UEFA threw up this blockbuster tie. On the basis of recent form, the edge has to go to Atletico and United will do well to keep a cleansheet especially away from home. FootTheBall predicts a 2-1 win for Los Rojiblancos.