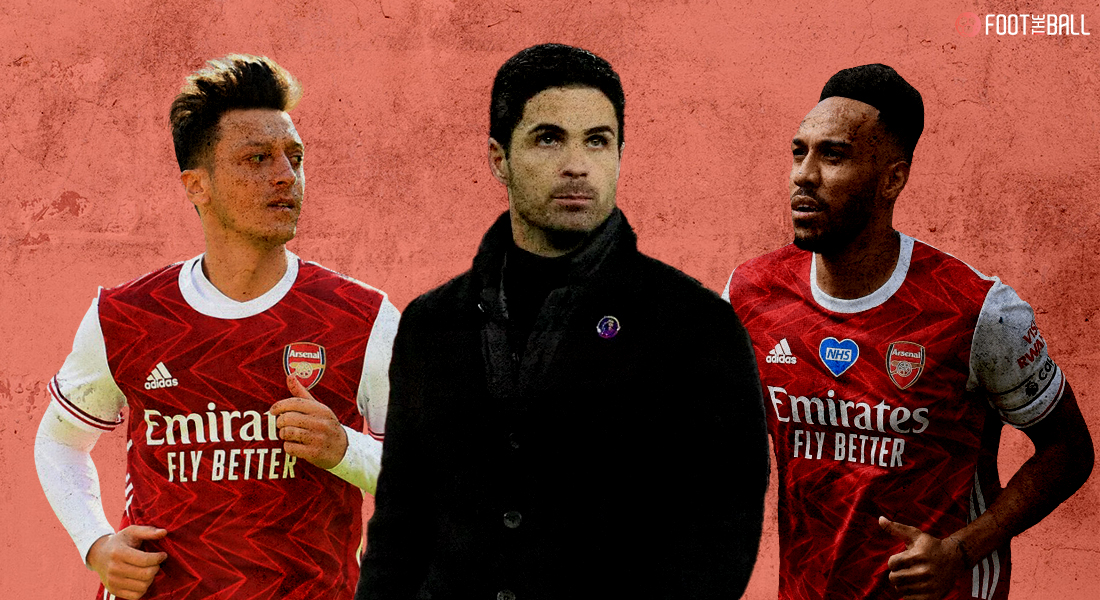 Ever since Pierre Emerick-Aubameyang signed a contract extension after months of speculation, at the end of last year, his performances have drastically taken a cause for the worse. Due to this, people have begun to liken his situation to that of Mesut Ozil, who also went through a similar sort of situation at the Emirates Stadium.

Aubameyang could turn into a big problem for Arsenal manager Mikel Arteta if he does not start turning up according to Jamie Carragher. The Sky Sports pundit slammed the Gabon striker after another poor performance against Liverpool at the weekend.

The Arsenal captain was taken off in the second half in his side’s 3-0 defeat to the Reds after a lackluster performance. The result left Arsenal 10th in the table and meant that Aubameyang has scored just once in his last seven appearances in all competitions.

Is Aubameyang doing enough for Arsenal?

Carragher drew a parallel for Aubameyang with Ozil on their similar huge contract and seeming lack of desire to give their 100% for the Gunners. The striker penned a new deal in September keeping him at the club till 2023 and reportedly earning him upwards of 300,000 GBP per week.

The new deal has coincided with the downturn in form. He has scored just 15 goals in all competitions this season and will finish the campaign comfortably short of the 29 he got last season and 31 the year before.

This is where you belong, Auba ❤️

Aubameyang also missed out on the North London derby in March for turning up late, a vindication for those who claim his head is not in the game.

However, his lower goal return may not be just a function of off-field problems. In the past two seasons, the team functioned around and was built to supply him. This year, the emergence of Bukayo Saka, return to form of Alexandre Lacazette and the January signing of Martin Odegaard means that Arteta does not have to rely upon Aubameyang as much.

The captain certainly seems less involved in matches. His dribbles attempted per 90 has fallen to 1.12 in the Premier League this season from 1.41 last year. His touches per 90 have fallen marginally but there has been a marked difference in where he is involved with the ball. His touches in the attacking third has fallen from 19.3 per 90 to 18.6 while his involvement in the defensive half has increased from 4.57 to 5.05 per 90.

😎 The goals
🕺 The celebrations
💪 The big moments

My favourite @Aubameyang7 memory so far is ________ pic.twitter.com/qIpEkutkbL

Aubameyang is also shooting less and passing more. Last season the forward was taking 2.59 shots per game which has fallen to 2.15. His passes completed has risen from 17.6 per 90 last season in the Premier League to 20.2 this year. Arsenal’s inability to break down defences and lethargic play has affected Aubameyang considerably and given him fewer opportunities to score.

Carragher though believes that the striker is just not trying hard enough. He is not entirely baseless in his analysis. Aubameyang is attempting over four fewer pressures per 90 and his tackles have fallen from 1.12 a game to 0.24.

“I think Aubameyang’s performances this season have been lazy, at times. I don’t care how many goals he gets – he’s won Golden Boots in the past – but he’s definitely a player who doesn’t bring anything to this team if he doesn’t score a goal, and that’s a big problem.”

The loss to Liverpool was the second consecutive match where he was subbed off.

“I watched him at West Ham and I’d go as far as to say it is one of the worst performances I’ve seen this season. I was commentating on the game and when he went off the pitch in the 77th minute, Arsenal scored and he celebrated with (Alexandre) Lacazette, and I said that’s the most energetic I’ve seen him this season. He then gets brought off again against Liverpool. This is your star man getting taken off in the last two games on the back of me wanting to see a reaction.”

WHAT NEXT FOR AUBAMEYANG?

Aubameyang will be 32 by the start of next season but has a lot to offer. He has shown his quality in flashes and it is up to Arteta to help him rediscover his form. The Mesut Ozil saga at Arsenal was beneficial to no one, cost the club enormous amounts of money and no party wants a repeat of it with Aubameyang.