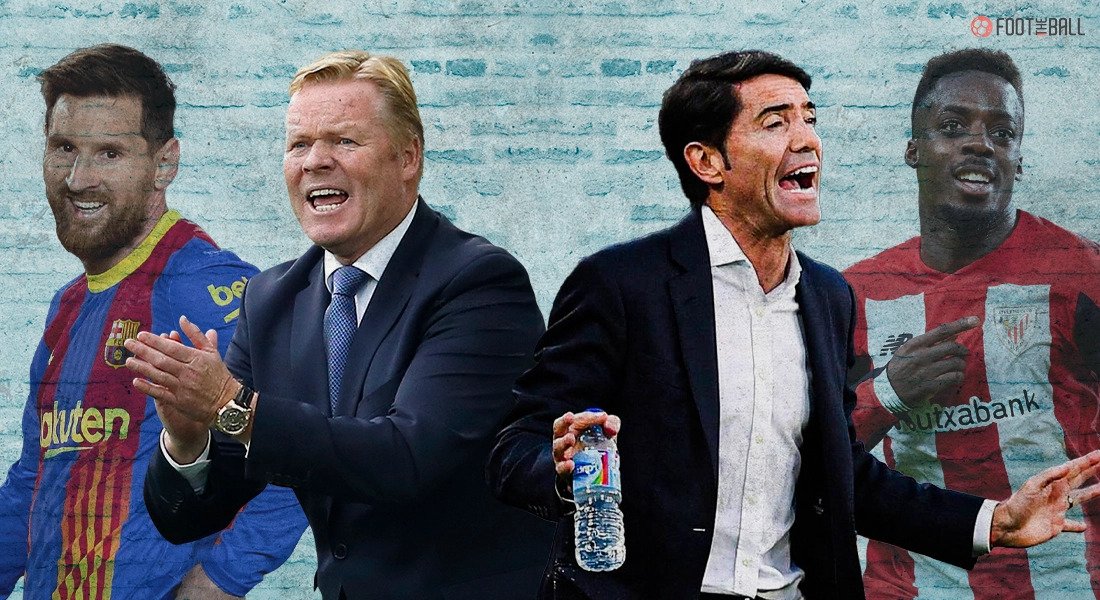 Athletic Club Bilbao will face Barcelona to decide the fate of the Copa del Rey on Saturday evening. The empty Estadio de La Cartuja stadium in Sevilla will host the final which will crown the champion of one of Spain’s oldest competition.

❝I always go out with the intention to dominate the game.❞
— @RonaldKoeman ahead of the Copa del Rey final pic.twitter.com/PcZUcrFDcH

Barcelona will be keen to impress after a disappointing spell of games. Messi will look to step up his game tonight and inspire Barcelona once more. The early Champions League exit once again and the appalling in the El Clasico has lowered the morale in the dressing room. A Copa del Rey final is something that the Catalans always adored, winning it an astounding 30 times. A 31st success could do the club a world of good.

Athletic Club Bilbao also are facing a dip at the moment, not managing a single win their past five La Liga matches. The Los Leones or Lions will look to forget the loss they faced in the 2020 Copa del Rey final played in the same stadium just 2 weeks ago.

Real Sociedad took home the silverware on the night in what seemed like the realistic chance for the team to win the competition out of the two finals. However, Marcelino’s Bilbao will look to take inspiration from the Supercopa win they had over Barcelona on the 18th of January. A 3-2 victory over the Spanish giants to take home the silverware which also featured a late sending off for their No.10 Messi.

🙋‍♂️ #Culers! @mterstegen1 has a special message for you ahead of the Copa del Rey final: pic.twitter.com/rVnAluLWs0

Gerard Pique’s return to fitness may see Barcelona revert back to their preferred 4-3-3. Frankie d Jong could move into his strong midfield position with Busquets in the spine.

Marcelino has a few pressing injury concerns hampering his preparations ahead of the final. However, Athletic rested a number of regulars in their last league game and we should see a more familiar line-up here with Peru Nolaskoain their only definite absence.

‘It’s a brilliant run from Messi, can he go all the wayyyyyy!…….It’s one of the great Copa Del Ray final goals from the magical Lionel Messi!!!!’
‘He’s just unbelievable. How do you stop him?? And you think three of him around him, he’s not gonna get past them. He does!!’ ‘I don’t think we’ve ever seen or ever will see anything like Lionel Messi again’ – commentators in the 2015 Copa Del Rey Final

A wonder goal from Lionel Messi in the 2015 Copa Del Rey Final against the very opposition they faced in 2021 final in Sevilla. Messi inspired Barcelona and stunned the world with an amazing solo goal that will forever live on in the hearts of every spectator. Beautiful, Magnificent, Incredible! The Footballing world will eye Messi, Barcelona’s star man, to come up with another scintillating performance as he has done so many times throughout his career.

Athletic Bilbao will look to their 26-year-old number nine for inspiration. He has netted 5times and assisted as many for the club in his 26 La Liga appearances and has been a constant threat for opposition defenders. A tall and powerful figure in the 6-yard-box, Williams will look to bully his way through to goal.

It isn’t a question of the tactical formation that Barcelona players will line up in. It’s rather a question of heart. Whether the 3-4-2-1 or the 4-3-3, does the players go out with the desire to win. A young squad that features several players that will play their first-ever Copa del Rey final.

The experience within the team will have to dictate the game and maintain the spark. Athletic will come out strong, physical and intense. A trademark that they used to stun Barcelona in January. Will Barcelona hold their ground or will they fall yet again?

A chance at redemption for both teams, a tale of different ambitions. FootTheBall predicts Barcelona 2- 0 Athletic Club.