DREAM OVER, HOPES UP 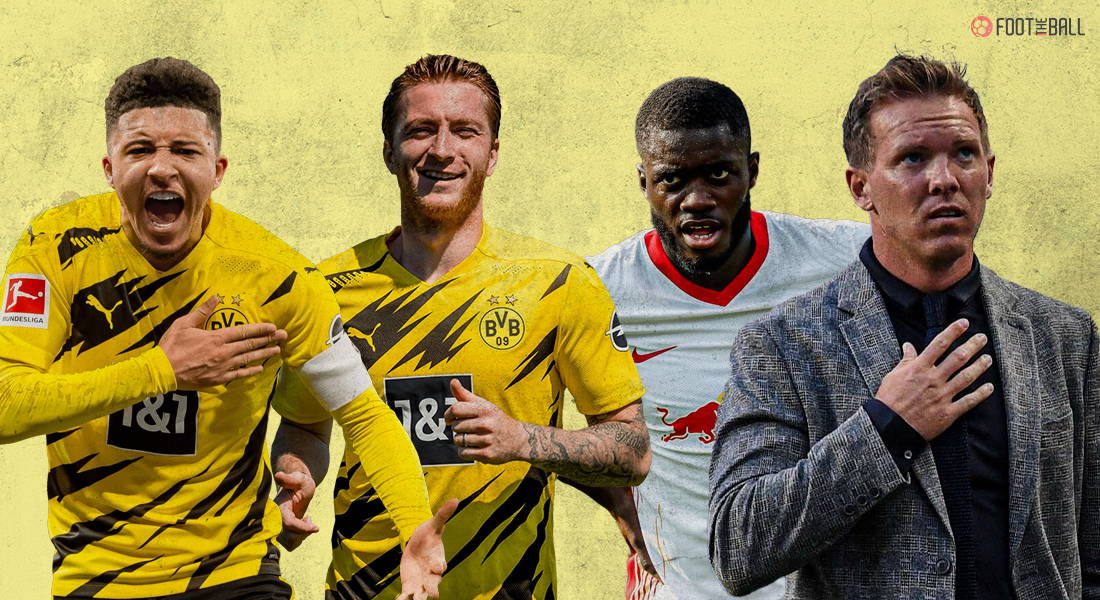 Borussia Dortmund hosted RB Leipzig in Matchweek 32 of the Bundesliga. Both teams went into the match with different ambitions. The home side is in a desperate pursuit for a Champions League position while RB Leipzig could have( at least mathematically) made a claim for the Bundesliga title.

The match ended in favour of the home side in an exciting five-goal thriller. The hosts hit a goal each in the opening minutes of each half, but a late comeback was on the cards as the visitors hit two goals in the second half. The final goal in the dying minutes of the latter half ensured the victory for Dortmund who has now temporarily jumped to fourth in the table. This victory also means that Bayern Munich are now the official Champions of Bundesliga 2020-21.

The game kicked off at 100miles an hour as both teams attacked each other’s goal with the ambition of scoring. The first significant chance came the way of RB Leipzig when forward Hwang muscled his way past Hummels to make a half-hearted effort on goal from inside the six-yard box. Hitz in goal positioned himself well to ward off the shot.

It's a beauty for @BlackYellow! 🐝@HazardThorgan8's pass and then… @Woodyinho to finish. ✨

Just moments later, the Dortmund captain combined brilliantly with his number 10 to find a route through to goal. Marco Reus made a dummy run as the ball was worked in the right channel. Thorgan Hazard received the ball that Reus dummied and laid off a first time through ball to Reus who continued his run. The captain took a couple of good touches and made no mistake from the centre of the box as he smashed the ball into the roof of the net. Gulacsi in goal stood no chance! Minute 7, Dortmund 1-0 Leipzig.

Reus is now just four goals away from beating Pierre Emerick Aubameyang’s record in the 21st century for the club with 141 goals.

JADON SANCHO DOES HIS MAGIC

In the absence of the formidable Erling Haaland, Jaden Sancho made sure to lay claim as one of the headline makers. The number seven was afforded way too much space on the left flank as Guerreiro charged through on the Leipzig defence. The wing-back passed the ball to the number seven who had an easy time shimmying the defender to make a low shot through the legs of the Upamecano to goal. Once more Gulacsi in goal between the sticks stood no chance. Minute 51, Dortmund 2-0 Leipzig.

Magic from @BlackYellow as they retake the lead! ✨@Sanchooo10 gets his doppelpack… ✌️

The Yellow Wall would have been proud of their young winger who made good use of the space he was afforded.

It took twelve more minutes for the away team to come up with a reply. Dortmund gifted Leipzig an unnecessary corner in the 62nd minute. Forward Emil Forsberg whipped in a beautiful ball that was met brilliantly by Lukas Klostermann who guided the ball into the far corner. The defender is the sixteenth different goal scorer for the team this season, a new club record. The goal gave hope for the young Leipzig coach who was urging his team to step on the pedal. Minute 63, Dortmund 2- 1 Leipzig.

Leipzig kept threatening the Dortmund goal and found the equalizer in the 77th minute. Once more Hwang muscled past an aggressive Mats Hummels to lay off a pass to an onrushing Dani Olmo who had the easy job of tapping it into the net. Minute 77, Dortmund 2-2 Leipzig.

A hard fight but no points in Dortmund 🚫

There’s a reason Bayern Munich bet their money on the young 33-year-old Manager Julian Nagelsmann. His team showed great enthusiasm and passion to find the comeback.

However, just three minutes to the end of extra time, Jadon Sancho propelled Dortmund to a temporary Champions League spot. Once more, it was Guerrerio and Sancho that combined to find the goal. A well-worked back heel from Sancho found the left-back who cut the ball back into the box for Sancho, who controlled the ball well and turned it into the net. Minute 87, Dortmund 3-2 Leipzig. Dream over.

Leipzig showed heart but the Sancho goal towards the end of the match hindered their hopes. Nonetheless, the team showed great enthusiasm and we can expect a similar matchup when these two meet next week in the DFB-Pokal final.