India at the World Cup! 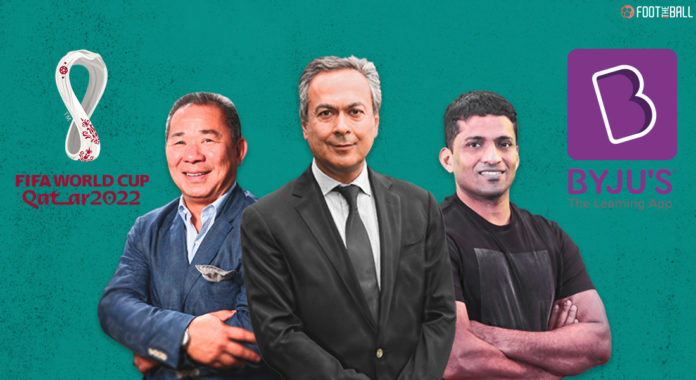 In some major news surrounding the FIFA World Cup in Qatar, Indian ed-tech firm BYJU’s has become the latest sponsor. This marks a significant leap forward by India in the World Cup scene. The Asian minnows have never made it to a World Cup yet but this news is sure to buoy the fans.

We are delighted to announce that BYJU’S would represent India at the biggest stage as an Official Sponsor of the FIFA World Cup Qatar 2022™️.

This would make BYJU’S the first EdTech brand to sponsor this prestigious event globally.

Moreover, BYJU’s becomes the first company from the educational sector to become a sponsor. This marks the latest step in the rise of Asian money flowing into major footballing events.

India at the World Cup finally

The strongest association that India had had with the World Cup before this event was in 1950. The national team had been drawn in Group 3 alongside Sweden, Italy, and Paraguay. However, the Blue Tigers withdrew from the tournament as FIFA barred them from playing barefoot alongside lack of practice and the looming Olympics.

That remained the last time India had got close to participating in the World Cup proper. They have never been too great at the qualification level either, falling in the early rounds.

BYJU'S FIFA World Cup….has a ring to it eh? pic.twitter.com/LXFKU2vKTi

Given all of that history and the fact that cricket is worshipped in the country, this news is a shot in the arm of football lovers. BYJU’s has become synonymous with the online education space in recent years. Yes, there are other competitors but BYJU’s was the first to really penetrate the market on a country-wide level.

In recent times, BYJU’s has been delving more and more into the sports area. It is the official sponsor of the men’s Indian national cricket team. Moreover, it is also the main sponsor of Indian Super League (ISL) club Kerala Blasters. BYJU’s at the World Cup will surpass all of that.

The financial details of the deal has not been revealed yet. Moreover, there is real hope now that BYJU’s will also start investing in the game at the grassroots level within India.

FIFA’s involvement will also bring renewed focus on a sport that has been neglected for too long. The fact that this news comes at a time when the men’s Indian football team are in the midst of a pair of friendlies against Bahrain and Belarus respectively. BYJU’s can do great things with this World Cup association if leveraged well.

The rise of Asia in world football

No Asian nation has ever made it to the final of a World Cup, let alone win one. Though there have several piercing questions regarding Qatar as hosts, the glamour of the event is undeniable. The first time the World Cup is happening in the Middle East is sure to be an event like no other.

Therefore, it makes sense that Asian firms are getting involved more and more. On Tuesday, FIFA announced that cryptocurrency platform Crypto.com from Singapore has also joined as a sponsor.

https://t.co/vCNztATSCO is proud to be the first crypto trading platform sponsor of the FIFA World Cup Qatar 2022 🏆

This is the second major sports coup for the company after recently getting the naming rights of the erstwhile Staples Centre in Los Angeles which houses the Los Angeles Lakers and Clippers of the NBA and Los Angeles Kings of the NHL. Indeed, there are four Chinese companies associated with the World Cup. Three of them are as sponsors (Hisense, VIVO, Mengniu Dairy) while one is a partner (Dailan Wanda).

China doesn't have a team in the #2018FIFAWorldCup, yet it's presence is everywhere: mascot 'Zabivaka' accessories, trophy replica, official match balls all 'Made in China'. Chinese Brands-Wanda, #Hisense, VIVO, Mengniu, Yadi, LUCI and Diking as sponsors at different levels. pic.twitter.com/z9IE0tELvT

However, the major influence of Asian money and popularity in football is most evident in ownership of clubs. There are several examples from England, Italy, and rest of Europe. Leicester City who were Premier League winners in 2016 and lifted the FA Cup last season were owned by Thai businessman Khun Vichai and now by his son Khub Top. Southampton are owned by Gao Jisheng, a successful real estate businessman.

Everton are managed by Farhad Moshiri, a British-Iranian businessman with investments in a whole array of sectors. Serie A champions Inter are owned by Zhang Jindong of the Suning Group. Therefore, it is easy to see how Asian investments have risen and there are many more examples in the lower divisions too.

Football is much of an afterthought in India, especially amongst the older generation. Asia’s richest man Mukesh Ambani has a cricket team. So does Bollywood’s (film industry) biggest star. The Indian Premier League (IPL), a domestic cricket competition is wildly popular and draws in huge crowds. So for India to make a splash in football, it has to be something noteworthy.

BYJU’S will be the official sponsor of 2022 FIFA World Cup. This could be good news for football in the country provided #Byjus invests in the game here across all levels. Otherwise there is no reason for excitement as the deal might only further the interests of Byjus

There are a few actors who own/owned football clubs but the sport is not organized or garners fanfare. BYJU’s has tapped into a market that can offer a multitude of possibilities for young children hoping to make a career through football. Who knows, maybe more such investments will follow around the world and India can take its place at a World Cup someday.