Can Usain Bolt Really Make It As A Footballer? 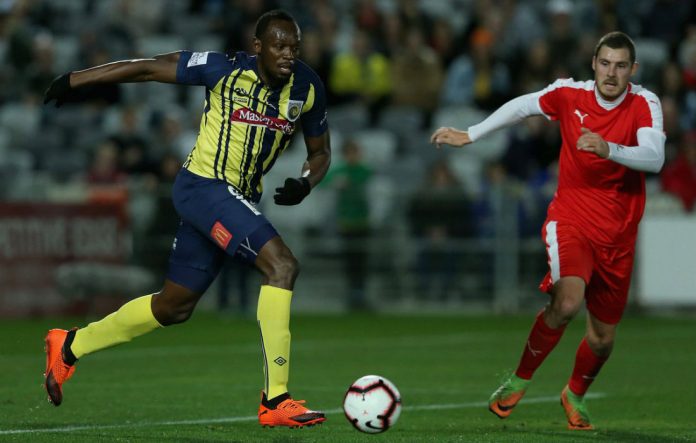 The author, Edward Hope, is Lecturer, School of Sport, Rehabilitation and Exercise Sciences, University of Essex. This article was originally published in The Conversation, an independent source of news and views from the academic and research community.

What to do when you’ve won it all?

After the 2017 World Championships and a truly stellar career, Usain St Leo Bolt bowed out of the sport he dominated for so long. Fame, fortune, and a personality to match, it’s hard to imagine Bolt was short of offers on hanging up his golden-laced spikes.

So, what do retired Olympic sprinters do: coach, commentate, agency work, celebrity TV appearances, or just rest on their laurels? Bolt had different ideas, openly expressing his desire to play professional soccer: “Maybe a club will see something and decide to give me a chance”, he said.

As an avid Manchester United fan, his most recent public appearance came as he captained the Rest of the World in the 2018 Soccer Aid at Old Trafford. Prior to this, he trained with South African outfit Mamelodi Sundowns FC, Norway’s Stromsgodset, and even German giants Borussia Dortmund.

In recent weeks, Bolt has earned an “indefinite training period” with Australian side Central Coast Mariners, and on August 31 he made his debut as a “trialist” in a pre-season friendly against amateur side Central Coast Football.

Notwithstanding Bolt’s profile, such sporting career transitions raise a series of questions for scientists like me with an interest in expertise research, and elite performance. How do individuals achieve such expertise? Is it possible to transfer between sports? And are some sports easier to transfer to than others?

Expertise can be defined as the ability of an person to consistently demonstrate superior levels of proficiency within a particular domain over an extended period of time. This is highlighted perfectly by Bolt, who won gold in the 100m, 200m, and 4x100m relay at three successive Olympics.

Historically, theorists studying expertise have fallen into two schools of thought that parallel the “nature versus nurture” debate. Some, such as the 19th-century scientist Francis Galton, argued that eminence in science, music, art, and other fields reflects an innate or natural ability.

But practice is uniformly regarded as the single variable that has the greatest influence on skill acquisition. And this lead to the alternative viewpoint that it takes a minimum of 10,000 hours or ten years of “deliberate practice” to achieve domain-specific expertise.

Typically, researchers today are of the view that while the sheer amount of practice is important, other factors, such as genetics, ability and motivation are also likely to be critical. To this end, though Bolt may be blessed with certain hereditary capabilities such as height and a greater proportion of fast-twitch muscle fibres, he has also invested the necessary training hours in order to reach the top of his sport.

So how easy is it to become a footballer? Soccer expertise is multi-faceted in nature, compromising of physiological, emotional, technical, and cognitive factors. By looking at how much footballers have practiced in the past, sports scientists have attempted to shed light on how they developed those skills.

In their study of elite English soccer players, one group of researchers concluded that early specialisation is an important precursor to expertise. Specifically, players would engage in deliberate practice of their primary sport – in this case, football – from a young age (around five years). These activities are highly structured and often coach-led, with the specific purpose of improving performance.

The early engagement pathway is an alternative approach, which involves meaningful amounts of unstructured soccer-playing during childhood (six to 12 years of age), rather than coach-led practice and competition (“deliberate practice”).

Anecdotal evidence exists of Bolt playing street cricket and soccer when growing up, which seems to fit more with the early engagement pathway. That said, without a detailed account of his practice history it is impossible to know how his sporting childhood may have shaped his soccer potential.

In light of his athletic commitments, it is difficult to see how Bolt has accumulated the required practice hours, in either soccer play or deliberate practice, to successfully transition to the professional game.

This brings us onto the question as to whether the skills developed from his years of experience in sprinting, could transfer to soccer. We know that successful career transitions are possible and one example is the former track cyclist Victoria Pendleton: after retiring from the velodrome at age 31 with Olympic and world titles, she made her competitive debut in horse racing three years later.

How successful the transfer can be depends on the level of identical or similar elements that exist between the two performance domains. Sports scientists have classified these elements into four categories:

With the exception of certain aspects of physical conditioning such as reaction speed, and perhaps movements such as acceleration, it is evident that track sprinting and soccer share very little in common.

In contrast, it could be argued that many more similarities exist between sprint cycling and horse racing (pacing strategies, for instance), hence Pendelton’s successful transition.

Although only a very brief overview of expertise and the issue of transfer, the odds are stacked against Bolt, not least because he is 32 and soccer players typically reach their peak a few years earlier.

That said, transfer from one sport to another is a complex process and all sorts of physical, social or functional variables can influence the rate and degree of transfer.

Be it fate, genetics, or sheer persistence, sometimes, everything just works out. A prime example comes from this year’s Tour de France. While most racers had devoted their lives to cycling – overall winner Geraint Thomas began aged ten – fourth place Primož Roglič was a former junior world ski jumping champion. His achievement was even more astonishing given he only took up cycling in 2012, already in his 20s.