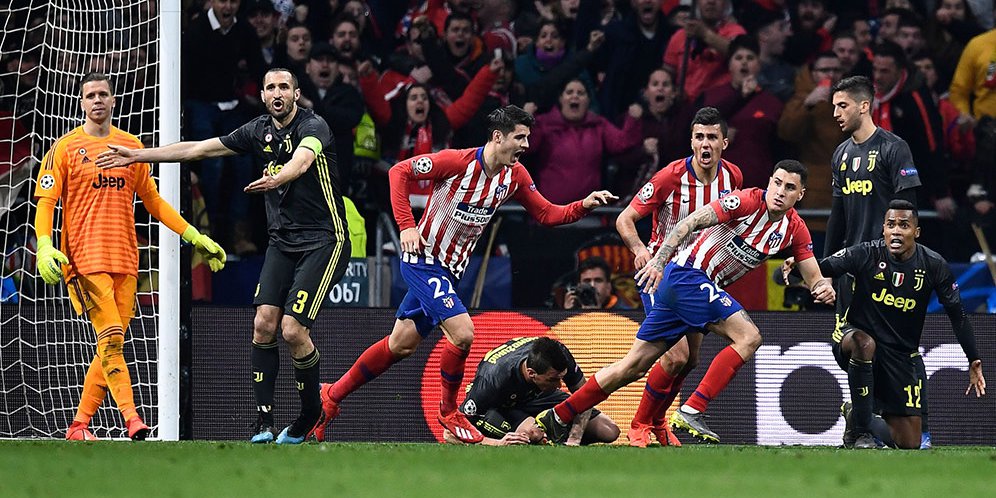 Late goals from Jose Gimenez and Diego Godin gave Atletico Madrid a 2-0 home win over Italian champions Juventus in the first leg of the Champions League last 16 at home on Wednesday night.

Boasting a great chance of reaching the quarterfinals, Atletico took a step towards fulfilling their dream of reaching the Champions League final, which will be played in their home ground – the Wanda Metropolitano Stadium – at the end of the season.

The game meant a frustrating return to the capital for former Real Madrid striker, Cristiano Ronaldo, who went closer than anyone in Juventus to scoring an away goal.

Atletico coach Diego Simeone decided to give a rapid return to Diego Costa in his starting 11, but it didn’t take long for Costa to get a yellow card which will keep him out of the second leg.

Atletico keeper Jan Oblak produced a flying save to deny Cristiano Ronaldo’s free kick from 35 yards and set a tone for an entertaining first half.

Leonardo Bonucci headed over from a corner after 11 minutes, before Atletico caused chaos in the Juventus penalty area from a loose ball without managing a shot on target.

Atletico thought they should have taken a penalty in the 26th minute when De Sciglio clipped Costa’s heels in the Juventus box. But after consulting with the VAR, the referee judged that the foul was outside the area.

The second half saw Costa slice horribly wide with a beautiful penetration by Griezmann. But Szczesny pulled off a brilliant save to tip Griezmann’s chip onto the crossbar.

Former Juventus striker Alvaro Morata replaced Costa just before the hour and he headed home Felipe Luis’ cross with 20 minutes to go. However, the VAR came into play again to rule the goal out for a push.

In the 78th minute, Gimenez lifted Atletico up to 1-0 lead with a low shot after the ball sat up nicely for him as Juventus failed to clear a corner.

Five minutes later, it was 2-0 as Godin squeezed the ball home from a narrow angle following a free kick.

To add to the delight of the Atletico fans, the ball was deflected into the net off Ronaldo’s back. Oblak was at his best again in injury time to parry Federico Bernardeschi’s effort.

And the first legs of all the Championis League round of 16 matches have ended.