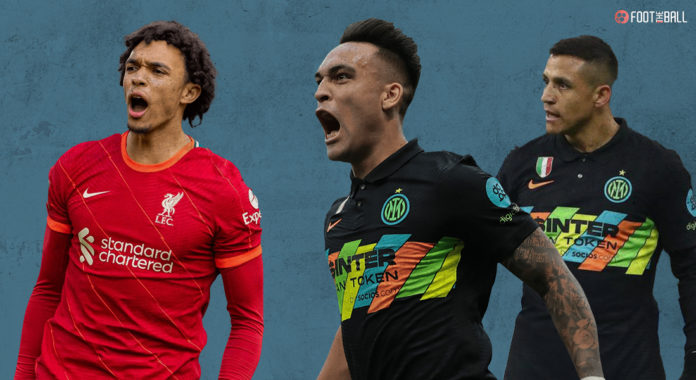 Liverpool were defeated 1-0 at Anfield in the Champions League by Inter Milan but secured progression to the quarter-final with a 2-1 win on aggregate.

Simone Inzaghi opted to start Alexis Sanchez ahead of Edin Dzeko on the night and the Chilean was heavily involved from the beginning. He made some clever runs in the opening few minutes but his decision making in the final third was poor.

Liverpool started the half looking to protect their two goal lead but still provided some threat on the break. Like in the first leg, Trent Alexander-Arnold’s deliveries were arguably the Reds’ most potent attacking option and he found Virgil van Dijk from a corner. The Dutchman’s header though was straight at Samir Handanovic.

The patterns of play for Inter were also similar for Inter. They relied heavily on Ivan Perisic as an attacking outlet but things failed to click and it was Liverpool who looked more likely to get the goal. They nearly did so just after the half-hour mark, Alexander-Arnold once again the creator.

31' – Trent's free-kick has the perfect amount of pace on it and Matip heads against the crossbar.

A free-kick from the left wing was swung in by the young Englishman and Joel Matip got good contact but his header cannoned back off the crossbar with Handanovic stranded. The resulting corner was again a big chance but Milan Skriniar got an excellent block in to deflect van Dijk’s header away.

It was a set-piece from which Inter drew the first good save from Alisson. Denzel Dumfries was brought down just on the right edge of the Liverpool box and Hakan Calhanoglu whipped in a dangerous cross-cum-shot. Alisson dealt with it well, getting a strong hand to push it away.

There was still time for another Alexander-Arnold set-piece, this time from a more central area. The right-back’s free kick was just wide of Handanovic’s post and that was the last action of the first half.

The second half provided much more action than the first 45 and Liverpool were on the front foot straight from the restart. They hit the woodwork again in the 52nd minute when Diogo Jota was played through by Thiago. The Portuguese’s attempt was blocked and it fell to Salah who could only hit the right side post on the rebound.

Inter responded well with Calhanoglu forcing a strike from distance that was blocked by Matip. Lautaro Martinez had a golden chance to get the opener on the night after a smart leave by Sanchez. His shot was disappointingly weak and Inter were lucky to get a corner.

Martinez made no mistake a minute later though, finally opening the scoring at Anfield. Perisic intercepted a long ball and the ball came to the Argentine striker. He was allowed to turn far too easily by van Dijk and he fired in a wonderful strike curling away from Alisson into the top corner.

Inter were on the up but the tide turned quickly when they went down to 10 men a minute after scoring. Sanchez was already booked in the first half for going in high on Thiago and he made the same mistake on Fabinho in the second. He did get some of the ball but the follow through made the decision easy for the referee.

The one man advantage handed the impetus back to Liverpool who nearly put the tie to bed, only to be denied by the post again. Sadio Mane played a delightful pass over the top of the defence for Salah who met it on the half-volley but Handanovic’s goal continued its charmed night.

Inter struggled to create with 10 men and the last few minutes were more about Liverpool trying to preserve their unbeaten home record. Arturo Vidal made a heroic block in injury time to deny substitute Luis Diaz from point blank range but it was in vain as Liverpool won 2-1 on aggregate.

Alexis Sanchez was a selection that raised eyebrows before kickoff for Inter Milan. The Chilean has only shown flashes of brilliance during his time at San Siro and the physical presence of Edin Dzeko would be a sore miss.

Even before the red card, his performance was iffy. Sanchez’ rustiness was visible with Martinez and Calhanoglu seemingly on a different wavelength. The dismissal was the salt in the wound for the 33-year old who will want to forget this match quickly.

Liverpool lost the match and there will be grumbles about how the red card prevented Inter from going for a comeback but the Reds were still in charge of the tie throughout. Even in the first leg, Inter had a positive period in the second half but Liverpool were the better team on both nights and overall.

They were very unlucky to lose the match as well having struck the woodwork three times. Jurgen Klopp would not lose sleep over the performance and his side will be favourites against most sides in the quarterfinals.

Inter Milan were not good enough going forward but they did do an exceptional job to keep a clean sheet against one of the best attacking lineups in Liverpool. At the heart of that defensive stability was 22-year old Alessandro Bastoni.

The young Italian’s was positioned well throughout, won his individual battles and was very calm on the ball. Bastoni showed on the night that he is truly the successor to Chiellini and Bonucci for Italy.