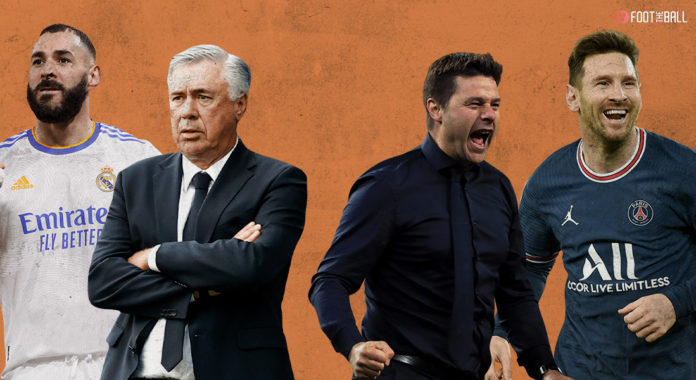 A heavyweight clash between two European giants decided by a last-minute winner? More of that, please! The second-leg of Real Madrid vs PSG promises to be a cracking affair with progression on the line.

Los Blancos have won all three of their matches since the defeat in Paris by a margin of 8-1. Carlo Ancelotti’s side sit eight points clear at the summit of La Liga. The return of Karim Benzema to top form has been a big boost during this run. Vinicius Jr. has struggled a bit recently but Marco Asensio on the right has been a welcome addition. Madrid’s defence were pressurized time and again in the last encounter, especially down the right.

Dani Carvajal, then Lucas Vasquez, had a terrible time containing Kylian Mbappe and the other runners. Ancelotti will no doubt be taking a hard look at how to best shutdown the right side of the defence. They simply cannot allow the front line of PSG to run at them incessantly and not keep ahold of the ball themselves.

In contrast to their opponents, PSG have endured a wretched run since that famous victory. Two defeats in their three games have cut their lead at the top of the standings to…13 points. It’s fair to say the title is theirs to lose at this point. Mauricio Pochettino’s men have been in a curious run of form this season, tasting defeat against supposedly weak opponents while beating the big fishes.

Though he might be leaving for Manchester United soon, his good work here continues. However, this time can be a lot harder compared to what they experienced at Paris. In front of a daunting home support, PSG will have to work extremely hard if they are to control large swathes of possession. Madrid will come hammer and tongs at them unlike last for they are a goal behind.

Toni Kroos has returned to training but whether he starts the tie will be a final minute decision. Otherwise, one of Eduardo Camavinga or Fede Valverede will deputise. Casemiro and Ferland Mendy are suspended after getting booked last time.

Mbappe got a slight knock in training and will be reevaluated today for fitness. Leandro Paredes and Achraf Hakimi were back in team training. Ander Herrera and Sergio Ramos are unlikely to feature at all.

The battle of the two French forwards. Benzema has been in terrific touch this season, having already racked up 25 goals and 11 assists. Moreover, his linkup play with Vinicius Jr. was the reason why Madrid were able to build up such a points gap in La Liga. Benzema was possibly not at his physical best in the first-leg and will be keen to make up. His game have evolved wonderfully in the past few years.

Karim Benzema has now scored at least 20 goals for the 4th consecutive season, all since Cristiano Ronaldo left Real Madrid in 2018 😤 pic.twitter.com/1AUd9cNnuF

Not only is he an expert finisher but Benzema can also setup his teammates brilliantly. Passes to his feet are switched over quickly to the wide players who can make darting runs. Benzema’s positioning sense will also worry the central defenders as to what to expect. PSG’s fullbacks love playing high up the pitch and that could be another avenue to exploit through accurate through balls.

The (potential) next Galactico himself was saviour of PSG last time. Mbappe has been linked with a move to his round-of-16 opponents since last year but has remained non-committal so far. His football has once again been top-notch with 24 goals and 14 assists already across all competitions. Mbappe’s speed, intelligence, and deadly finishing are all of the highest order with Madrid knowing they have to be extremely alert.

He can play all across the frontline, and could target David Alaba through the centre or Dani Carvajal down the right. Carvajal had a very poor game, getting beaten for pace or trickery often. Moreover, the plan to double team did not help as Mbappe could breeze through or draw fouls. If Mbappe can get into shooting positions often, it could be a long night for the visitors once again.

If Madrid start in the same lacklustre manner as in the first-leg, PSG will fancy their chances. Los Blancos need to step up their game immensely. For the away side, the equation is simple: Stay solid at the back and try for an early goal. FootTheBall predicts a 1-1 draw between the two teams, with PSG progressing as a result over Real Madrid.