Frank-ly running out of time! 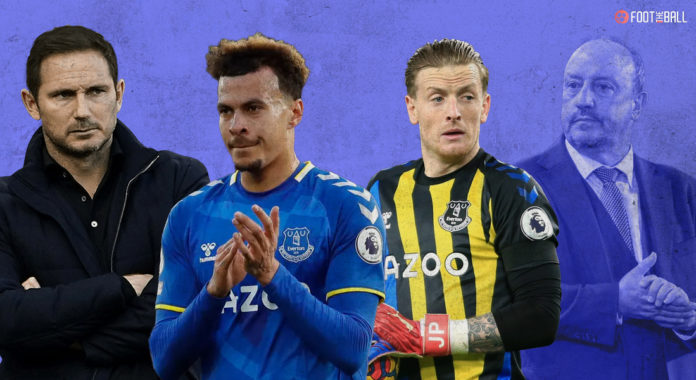 The match match between Spurs and Everton had a lot going on. Harry Kane broke Thierry Henry’s Premier League goals record. Spurs bounced back from their FA Cup exit in superb style by scoring five. Everton continued their dangerous slide down the table and Frank Lampard was serenaded with “you’re just a shi*t Steven Gerrard.”

Needless to say, the last thing is not in sync with the previous ones. Hence, the Toffees really need to do something quick. They are sitting level on points with Watford, having played three games less. However, even that might not be enough to save Everton as Lampard’s side have lost 18 of their last 20 matches.

Not a good omen for the Toffees. 😬 pic.twitter.com/yQRIKAEQNX

The former Chelsea boss was brought in to arrest that slide but there has been little signs of improvement. The latest loss comes at home to Wolves. Furthermore, with all their near rivals winning, something must give if they are to stop being relegated for the first time since 1954.

To say that everything is Lampard’s fault will be plain wrong. Everton were in dangerous waters already when Lampard arrived. There are several contributing factors for the mess. The muddled thinking of the board led by Farhad Moshiri has left a severely weakened squad despite spending millions since the new owners came. The poor transfer strategy at the beginning of the season that was further hampered by financial regulations. The icing on the cake was the appointment of Rafa Benitez as manager last summer.

The former Liverpool boss was an wildly unpopular appointment, and his signings were very underwhelming. Salomon Rondon, Andros Townsend, Demerai Gray and Asmir Begovic do not scream “top-half finish.” Though he got off to a quick start with three wins and a draw in his first five matches, the good times would not last. After a spirited 1-1 draw with Manchester United, the wheels fell off completely as Everton lost six of their next seven games. A last-gasp win over Arsenal broke the trend before they promptly went off on another one.

Everton have failed to score in their last 3️⃣ Premier League matches, only managing 2 shots on target in that time 😳

It's been a tough start in Merseyside for Frank Lampard 🔵 pic.twitter.com/GDTH4D1eoI

The defeat to Norwich was the last straw as Benitez was given his marching orders. The managerial search turned toxic as protests against Vitor Pereira saw him pull out. Frank Lampard was finally selected in the hopes of injecting fresh ideas and renewed exuberance.

The transfer window was also filled with activity, headlined by the signings of Dele Alli and Donny Van de Beek. There was hope for improvement, maybe not immediate, but soon. That has certainly not been the case.

Everton are ranking in the bottom half of every important metric available. Big chances created (19th), goals per-match (15th), goals conceded per-match (16th), and only four clean sheets. It was clear that Lampard had a lot on his plate to just get Everton into the top half. Only one win in five league matches is hardly the recipe for that. Even that win over Leeds United felt inevitable, given how poor the Peacocks themselves have been.

This is no exaggeration: Everton are delivering one of the worst team performances from any Premier League club this season. The disorganisation out of possession & the losses of the ball in dangerous areas in possession, are incredible.

The most worrying thing is how few players of actual good quality Everton have currently. The lack of options in some key areas is staggering. Seamus Coleman was given the run around by Heung-Min Son and is clearly showing his age this season. Nathan Patterson, signed in January from Rangers, is thought to be not ready as of yet to dislodge him. The sale of Lucas Digne by Benitez was a dagger blow, as Mykolenko is hardly an able replacement at this time. There’s no proper understudy for Dominic Calvert-Lewin whose absence in the initial months really hampered Everton’s scoring.

Only Norwich, Watford and Leeds have conceded more goals than Everton this season ❌

Two of those teams are in the relegation zone. Leeds have copped 21 goals in their last six matches.

And Jamie Carragher was a boyhood Everton fan.

Alli and Van de Beek play almost the same position so bringing in both was a head scratcher. Everton need creativity desperately, yes, but the current batch of players are simply too woeful to get the job done. However, even Lampard’s tactics are not helping matters this time as he can barely match up to the other teams on the pitch.

Can Lampard save Everton from the drop?

Few would have predicted that Everton would be battling the drop in March. Lampard’s system has not borne fruit yet, and it remains a question whether he has the players to implement his style. The defeat to Spurs highlighted many of the glaring problems that need addressing fast.

He chose to play a higher defensive line using a back three. That is a poor decision for a team desperately low on morale and the opponents having the most in-sync attacking duo. Son and Harry Kane ripped the defence to shreds every time they made their runs or got into the penalty box.

Was Lampard playing a higher defensive line with Michael Keane ever going to work ? For the 3rd goal, Keane misjudges the flight of the ball in a duel with Kane then gets completely outpaced by him to give him a free run on goal. The tactics do not fit the personnel.

Lampard urged his players to play expansive passes, trying to cover more yards and get in front of goal. However, those tactics are hard to put into practice given how bad the Toffees are defending. The marking was poor all match, while Spurs had enough time to switch the play and dictate the tempo. Lampard has switched formations multiple times since his arrival and the 4-4-2 looks the most assured one.

😰 “Everton were so poor I’m surprised that Spurs didn’t score 10!”

😡 “They were a disjointed, dysfunctional team of misfits without any desire.”

There’s not enough imagination or the technical knowhow in the players to break down resolute blocks. It’s no surprise that they have only managed one win from their 13 away games so far. The time to be over adventurous and going hell fire is long gone. Lampard needs to realize that the first priority is to become stringent at the back. Everton cannot keep conceding as their backline is very porous.

Based on points-per-game averages of remaining opponents, Everton have the hardest run-in of the bottom six, have won two of their last 19 league games, and their chances of relegation (per @FiveThirtyEight) have doubled since Lampard took over. Bleak. https://t.co/Lc197MFBLH

Jordan Pickford’s form for club and country being miles apart. Matters are not helped with some tough fixtures coming up on the horizon. Everton play Manchester United, Liverpool and Chelsea in April. It will be ironic for Lampard if he starts seeing upturn with Everton after tasting defeat at “3 points lane.”