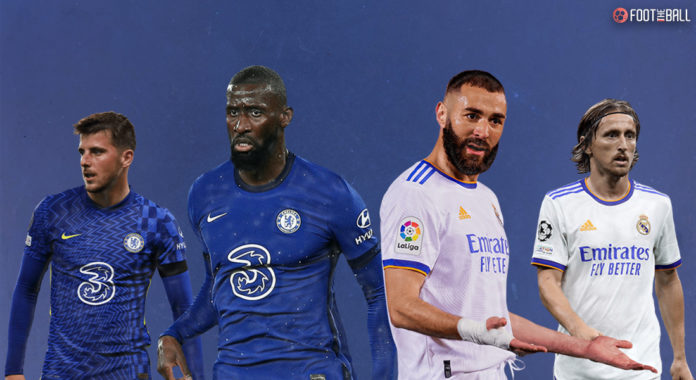 Chelsea and Real Madrid served up a Champions League classic as Carlo Ancelotti’s side knocked out the defending champions to advance to the semi-finals thanks to an extra time winner form Karim Benzema.

Sum up that game in one word…#UCL

Both sides were sharp out of the blocks with Real Madrid having the slightly better of the opening exchanges. Vinicius Jr had Reece James spinning like a beyblade in the opening few minutes, earning a dangerous free kick at the edge of the box in the 10th minute. Karim Benzema’s attempt though was weakly over.

Chelsea provided attacking threat of their own – Timo Werner and Kai Havertz forcing important blocks from the Madrid defence a couple of minutes later. Toni Rudiger headed over from the ensuing corner when he probably should have tested Thibaut Courtois.

The Blues did not have to wait long for the opening goal on the night, with Mason Mount halving the deficit in the 15th minute. Ruben Loftus-Cheek’s pass bounced kindly off Werner into the Englishman’s path and the Madrid backline parted like the Red Sea for him to finish emphatically from the edge of the box.

Thomas Tuchel’s men dominated the ball but Madrid regained some of their composure, sitting deep for a period and trying to hit on the counter. Vinicius was their preferred outlet but James had the measure of him overcoming his shaky start.

Chelsea grew a bit frustrated with Rudiger trying his luck from 35 yards trying to replicate his goal against Brentford recently. The game also became a bit cagey, Havertz and Kroos going in hard after Benzema picked up a booking for a foul on Kante.

Neither side more headway as the break came with the game finely poised. The interval gave Tuchel a chance to reorganise his side’s efforts and it paid instant dividends after the restart. Dani Carvajal’s clearance gave Chelsea a corner that wasn’t cleared properly and James had a dangerous shot go wide in the 49th minute.

The referee gave a corner but replays showed that there did not seem to be Madrid touch, That was decisive as Rudiger got on the end of the resulting delivery to bring Chelsea level on aggregate.

Madrid were shook but not sleeping, James had to be alert for a last-minute tackle on Benzema a couple of minutes later. The Frenchman was sparked into action, drawing an excellent save from Edouard Mendy from a 25-yard free kick.

The game opened up with the scores level, both sides putting all their cards on the table. Havertz had a half chance that he scuffed from the left channel inside the box. Ferland Mendy’s cross just before the hour mark was begging to be tapped in at the other end. After the hour mark it was Fede Valverde who hit a swerving shot from a Carvajal cut-back agonisingly wide.

Marcos Alonso thought he had given Chelsea the lead a couple of minutes later after a quick breakaway. Mount robbed Mendy off the ball in midfield and Kante played in the left-back who fired a shot into Carvajal. The ball bounced up off Alonso and he fired in the rebound with his right foot. Replays though showed that it had hit his arm before the second attempt and the goal was ruled out.

Madrid responded in equal measure. Benzema’s looping header seemed to be heading in from a cross from the left but it just bounced off the crossbar to keep the tie level. Rudiger had to be very alert to deny Vinicius a chance on goal from an almost perfect pass from Luka Modric.

Superb from Timo, runs in behind and keeps his cool to finish via a deflection!

It was a moment of sheer quality that put Chelsea ahead for the first time in the tie in the 75th minute. Some excellent build-up down the left from Alonso and Kovacic led to the latter playing in Timo Werner. The German looked up and saw no option and decided to take matters into his own hands. He made a fool of Casemiro and Alaba before creeping a finish in past Courtois to make it 3-0 on the night.

The rollercoaster did not end there as Modric produced his own masterpiece in an excellent season to put Madrid back level. His curling pass from the outside of the boot was inch perfect to fall onto Rodrygo’s foot to bring Ancelotti’s side back level at 4-4.

Neither side wanted to back off, Modric tested Mendy from distance while Mount fired wide from inside the box as the match headed to the final few minutes of normal time. The greatest chance to grab the winner fell to Pulisic in injury time as Rudiger headed down a long ball forward. The American was unable to control his volley and fired over.

A minute later he had an even better chance, Havertz’s knockdown found him with a more favourable angle. Under pressure he was unable to control his attempt once more. That was the last chance of the 90 minutes and the match headed into extra time.

Extra time maintained the drama. Six minutes in and Madrid had turned the tie upside down once again. A loose pass from Thiago Silva was picked up by substitute Camavinga who played in Vinicus on the left. The Brazilian crossed for Benzema and his golden head made no mistake in putting the ball past Mendy to make it 5-4 on aggregate.

Chelsea pushed and had a couple of half chances but Madrid also remained a threat on the break. Ziyech had the next great chance in the 115th minute after a break allowed him space to shoot from the left. The angle was unfavourable and Courtois was in the right position to beat it away.

Havertz had arguably the best chance of extra time from a James cross. He had a free header but could only direct it wide of the near post with just three minutes left to play. Madrid were being very lax as Jorginho also had a chance from a half-shot to bring Chelsea level but his shot was also wide.

Those were the last chances as Madrid saw the game out and advanced to the Champions League semi-finals. Here are our key takeaways –

Real Madrid were completely taken apart in the opening hour or so but they came back strongly to win the tie. Despite the result, there were many concerns that would encourage the teams that progress. Their defence was far too porous and the intensity fluctuated wildly.

However, their individual quality and Ancelotti’s minor tweaks to get the best out of it makes them such an unpredictable proposition. Modric, Benzema and co. can take on anyone on their night but their turning up is becoming an increasingly risky bet.

The referee and VAR had a very involved game with one disallowed goal, a questionable goal allowed and many other feisty battles all over. Rudiger’s goal was from a corner that should not have been given.

Marcos Alonso’s disallowed goal was also a very marginal but ultimately correct call. In the latter stages of the second half and in extra time, the referee did not take control and should have been more strict in dealing with the many niggling fouls.

Chelsea’s knock out meant that Real Madrid remain the only team to have defended the Champions League in the modern era. The wide variance of results make this such an entertaining competition and nights like these raise questions on whether we need the proposed reforms.

The probability of such fixtures reduces drastically in the new format with big clubs having a safeguard of sorts to maintain their stronghold on football’s finances. Maybe UEFA needs to reconsider their priorities and not deny fans such magical evenings.