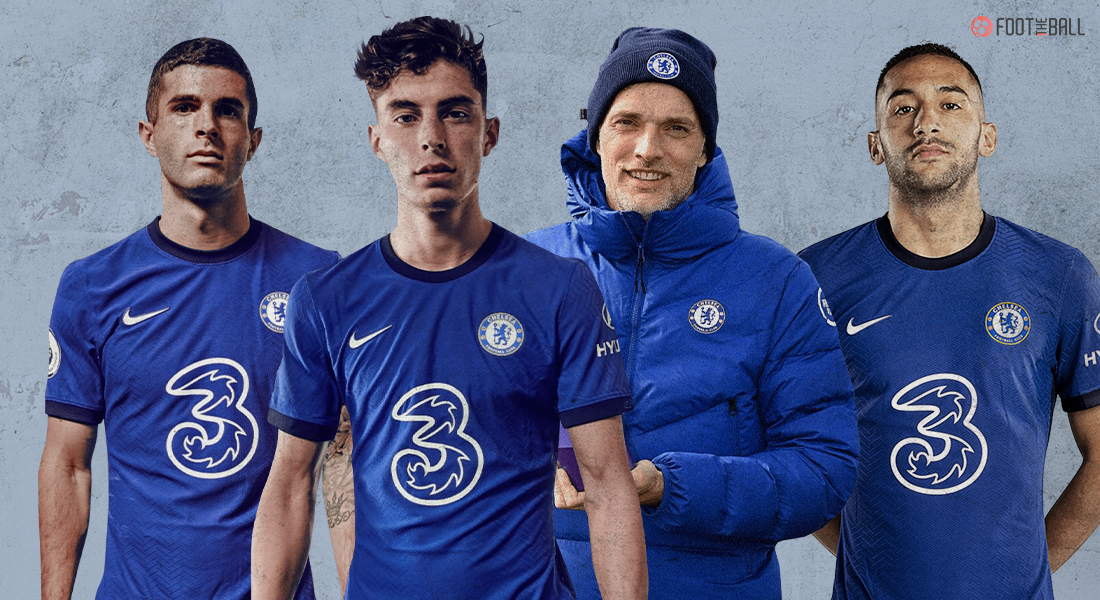 Chelsea meet Manchester City on Saturday in an all-English affair for the Champions League crown. Thomas Tuchel’s men barely scraped through to next year’s competition, having suffered losses in the FA Cup final and two out of their past three league matches to end their campaign. With Saturday night’s game the biggest of the season, the German has a lot of crucial decisions to take in terms of his personnel.

The 🏅 everyone wants to get their hands on 🤗#UCLfinal pic.twitter.com/PFRzdCrqyD

The majority of those will be regarding which of the front three start against the Cityzens. Tuchel’s system of 3-4-2-1 pits one central striker in front of two creative playmaking talents. With at least two options for each position in the squad, FootTheBall discusses who are likely to be the starting front three for the Blues in their quest to win.

THE TWO IN BEHIND

Mason Mount has been having a career season this term. The 22-year-old has bettered his stats across the board, racking up 15 goal contributions in all competitions (nine goals, six assists). However, Mount’s fluent and efficient play in midfield along with his relentless pressing garners the most attention for someone so young.

He is one of the most skillful and technically gifted players in the Premier League. His ability to glide past defenders and direct running with the ball make him a sure fire starter for Chelsea in this crunchiest of clashes. Mount is also adept from dead ball situations, which will be another factor working in his favour. In addition to his prowess in front of goal, his numbers in other key areas are all on the rise.

Mount’s percentiles when it comes to shot creating actions and passing accuracy are 88 and 91 respectively across players of his position in Europe. However, his defensive work has also taken a major boost with tackles and interceptions being 95 and 80 percentiles respectively. Furthermore, he has created the most number of chances by an Englishman across Europe and with the immense faith shown in him by the manager, Mount is surely one of the starters. Which leaves one more to choose from.

The trio of Kai Havertz, Hakim Ziyech and Christian Pulisic are all battling it out for the final spot. The German however, has the slight advantage of making the squad since he has also played as the lone man up top on occasions.

Both the American and Havertz were immense in the semi-final against Real Madrid. While Pulisic grabbed the goal in the 1-1 draw in the first-leg and had an assist for Mount in the second-leg, Havertz assisted the other goal at Stamford Bridge for Werner. Though, they are lacking in terms of xG and xA this term in the league (0.28 xG vs 0.21 for Pulisic; 0.37 xG vs 0.24 for Havertz per ninety).

It will certainly not be easy for Tuchel to select whom to partner with Mount. For the time being, the odds are ever so slightly in favour of Pulisic, with the remaining two watching from the sidelines at least for kickoff.

With Tammy Abraham being overlooked time and again, it seems to come down between Werner and Giroud for the striker’s role. The German’s biggest talking point this season has been of course, the number of times he has been caught offside. Notwithstanding that blemish, it looks certain that he will start for Chelsea.

No Chelsea player has more goal contributions than Timo Werner this season.

Werner is Chelsea’s joint top-scorer in the league and has 20+ goal contributions in all competitions. However, his goal tally of six in the top-flight is a sharp fall from his xG of 11.9 over the season. His confidence has also been shaken up in part due to the immense weight of expectations after being a star for Leipzig as well as being constantly in and out of the side. Furthermore, Tuchel and Lampard before him have also played Havertz up top multiple times.

Giroud will definitely not be starting in this mammoth tie. The 33-year-old has found game time hard to come by this season. With just eight starts in the league and no goals since February, Tuchel has opted to use the veteran as an impactful sub off the bench. His aerial prowess will come in handy late in the game, especially if Chelsea find themselves trailing going into the final 10-15 minutes.

TOUGHER THAN IT LOOKS?

While it seems like Pulisic, Mount and Werner should start, things are never quite what they seem for Chelsea. It can also happen that Havertz is tasked with managing himself up front, with Mount and Werner in behind. In fact, Werner has played on the left side of the front three, due in part to his direct running and speed when countering. Tuchel knows he has to get the team just right in order to salvage what has been a pretty average season by their standards.