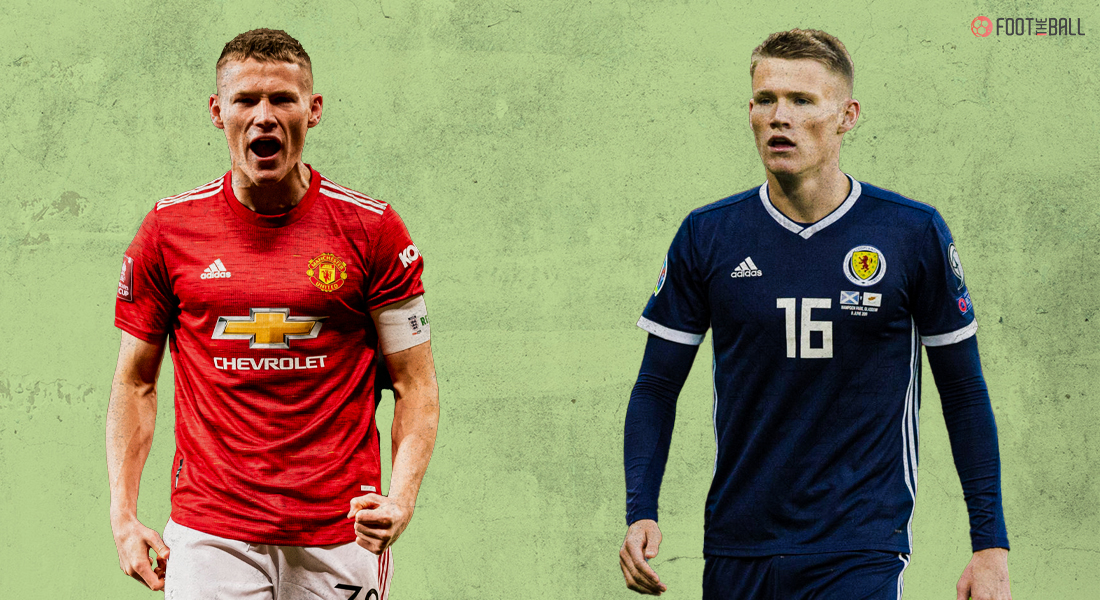 The Europa League final was not the best of nights for Manchester United. Ole Gunnar Solskjaer’s men did take the match to penalties, where they watched Villarreal score all 11 spot kicks. David De Gea fluffed his lines and the rest is history. With the Norweigan’s substitution strategies under the scanner and several players under performing severely, Scott McTominay’s performance was perhaps the only shining light in Gdansk.

The Scotsman, “best player on the pitch” according to Solskjaer provided the assist for Cavani’s equaliser, albeit with little knowledge after Rashford’s shot hit him. McTominay was deployed in his usual role of defensive midfield and was central to breaking up Villarreal’s cohesion. He notched up the most duels won (14) as well as the most dribbles completed (6), having played for the full match including extra-time.

With the European Championships less than two weeks away, McTominay will undoubtedly be a vital cog for Scotland. His play will be key if they are to make it out of a group containing World Cup finalists Croatia, Czech Republic and arch-rivals England. Steve Clarke will be banking heavily on the Red Devil to make an impact on both sides of the pitch.

The 24-year-old is enjoying his most productive season with seven goals and two assists in all competitions. Often partnered with Fred or Matic, McTominay has shown an affinity for joining the attack. His passing accuracy of 87%, which has only increased since his first season, and with more than half of his shots on target (53%). However, there is more to McTominay’s play than just his stats on the pitch.

Scott McTominay’s 7 goals in all competitions this season has doubled his career tally (14).

He is one of the most committed players when he plays, with his determination to fight and grapple in the midfield. McTominay loves to be involved in the play and is not shy of carrying the ball up the field showing an impressive range of passing. The Scotsman has become one of Solskjaer’s most trusted lieutenants, tasked with the defensive aspect of things in front of the back line.

Recycle possession and give it to those who are better. Keep it simple. Don't ‘try’ anything unless it's obvious.

In the Premier League, he has been involved in keeping seven clean sheets and his blocks p90 of 0.42 is far improved from 0.25 in 2019-20. All of which comes in handy given the fact that he will most likely be a dual role player for his national side this summer.

To say this Euros is of mammoth importance to Scotland is an understatement. Appearing in their first major tournament since 1998, the expectations are sky high. McTominay has been an ever present for this team since his debut in 2018. During last year, Clarke used him as a centre-back on the right side of a three-man defence, a role he looks set to continue for the near future.

Routine win for Scotland in the end, but standout performances from Tierney at LCB and McTominay at RCB.

Tierney causing all sorts of problems with the positions he took up, and McTominay likewise with his range of passing. pic.twitter.com/sSpr3gdCGR

Finding three pure defenders who can play at the highest of international level will be a big ask. Norwich City captain Grant Hanley is sure to feature after his impressive showings with the Canaries in a season where they achieved promotion to the Premier League. If McTominay will not be there, the other choices will most likely be Leeds captain Liam Cooper (nine caps) and between Scott McKenna or Declan Gallagher, neither of whom play on the level of Manchester United.

Thus, it will come as no surprise if Scotland do decide to prioritise defence over midfield creativity. Furthermore, considering the fact that their opponents will include two of the world’s top teams, McTominay’s flexibility in position will be a much larger asset than even that of captain Andy Robertson.

Scotland have two warm-up matches against Netherlands and Luxembourg before the competition kicks off. A much clearer picture will emerge once the teams are listed for those games, which will give a much clearer idea on where the Red Devil will play. No matter his position on the field, McTominay will be the most important man for the Tartans in their return from international wilderness.