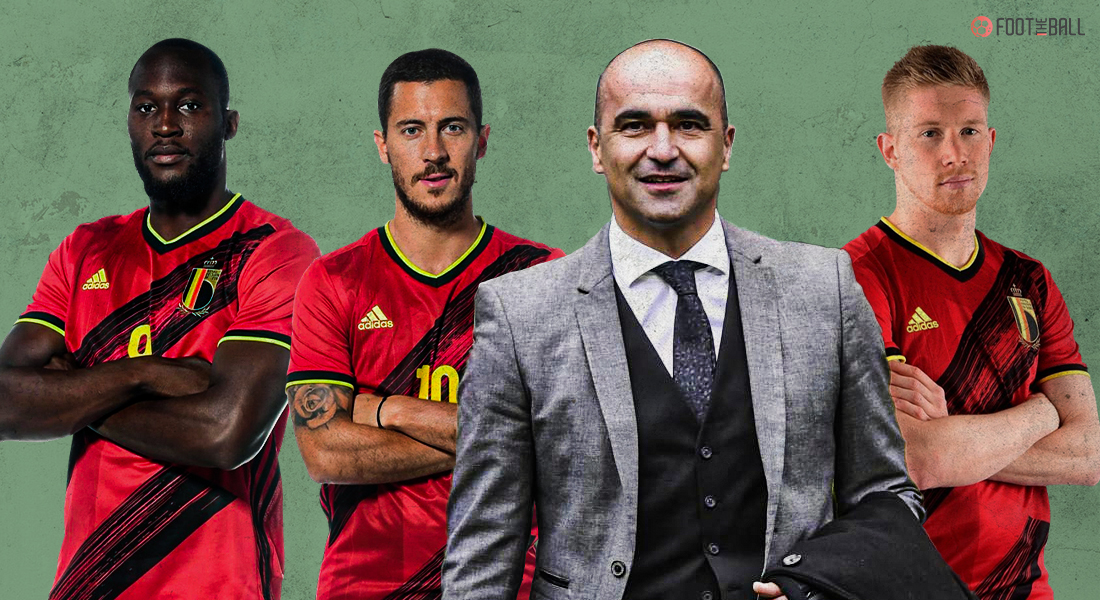 Roberto Martinez and his Belgian Golden Generation would look to fulfill their potential at the Euro 2020 kicking off in less than a month. The Spanish manager took over the Red Devils in 2016 and has done just about a decent job. With the Red Devils yet to win anything tangible questions are being asked whether Martinez is the right man to lead the golden generation.

With a host of players nearing 30 and the latter stages of their career, Euro 2020 and the FIFA World Cup 2022 are their last chances of winning major silverware with their national team. Belgium are the number one ranked side in FIFA world rankings as of April 7, 2021. They need to prove their status as the best side in the world and conquer the European stage.

Martinez’s 26 man squad for the Euros can be called top-heavy. They have big hitters in the attacking department. The defence has experienced names but looks weak as their best years might be beyond them. The squad also has been blooded with talented youngsters. It’ll be interesting to see how Martinez makes the most of this Belgian Golden Generation and delivers success.

Roberto Martinez was a defensive midfielder in his playing days. He enjoyed success at club level across Spain and the British Isles. Having started his career with Real Zaragoza he won the Copa del Rey with them before leaving for Wigan Athletic. He won the League One title with them before touring many clubs including Swansea City. Martinez retired in 2007 at the age of 34 years.

Martinez returned to Swansea City as player-manager in February 2007. He knew he wasn’t able to devote himself fully to both roles and gave up his playing career. He assumed the role of full-time manager from the 2007-08 season. Martinez stated that he idolizes Johann Cryuff and his ideologies and tries to apply them as a manager.

Swansea won the League One under Martinez earning a promotion to the Championship in 2008. He left for his ex-club Wigan Athletic in the summer of 2009 and was nicknamed “El Judas” by some upset Swansea fans.

Martinez managed to keep Wigan in the Premier League for three years as he was finding his feet as a manager. In his fourth season at the DW Stadium, Martinez won the FA Cup in 2013. Just three days after winning the FA Cup, his Wigan side was relegated to the Championship. A chance to step up arrived for Martinez in the form of Everton and he took it gladly.

It was at Everton where Martinez’s Belgian connection began. He coached three Belgians in Romelu Lukaku, Kevin Mirallas and Marouane Fellaini during his 4-year stay at the club. Martinez led the toffees to the Europa League as they finished 5th in the 2013/2014 season.

Frustrations started to appear amongst the Goodison Park faithful as Martinez’s side began to underperform in the 2014/2015 season. They finished 11th and reached the Round of 16 in the Europa League. He was sacked after the penultimate match in the 2015/2016 season as the board and fans had enough with him.

Martinez was nearing a decade of coaching career when he was shown the door at Everton. The Spaniard was assessing his future when the offer to coach Belgium arrived. After being sacked in May 2016, he was just out in the cold for two months before surprisingly being appointed the coach of the Belgium National team on august 3rd 2016. This proved to be the biggest challenge of his career.

Belgium is one of the most diverse countries in Europe. The players come from different backgrounds and different regions with multiple languages like Dutch, French, and German. Martinez was amazed at the diversity in the country. He said “ I think I was too young in footballing terms when I made the jump to International football. I wanted to take this challenge because I was curious seeing the talent coming from a variety of mentalities and backgrounds.”

While Martinez was earning his stripes, Belgian players were beginning to make an impact in the world of football. A young crop of players like Jan Vertonghen, Vincent Kompany, Marouane Fellaini, Kevin Mirallas, Moussa Dembele led them to a fourth-place finish at the Beijing Olympics in 2008. At the beginning of the next decade, the Belgians started to take Europe by storm.

Eden Hazard, Kevin de Bruyne, Thibaut Courtois, Nacer Chadli, Axel Witsel, Yannick Carrasco were the flagbearers of Belgian football in Europe. The team that failed to qualify for the 2010 World Cup and the 2012 Euros had a breath of fresh air with all the new players emerging.

From being called misfits a few years ago the players were now being referred to as “ The Golden Generation”. Marc Wilmots was handed the reins for the 2014 World Cup. The squad gelled in miraculously and made it to the quarters in the Brazil world cup where they lost to a dominant Argentina side.

The squad was reaching their prime in 2016 as they approached the Euros in France. They made it to the quarters with ease. After taking a lead against Wales in the quarters, they lost 3-1 remarkably. The shock defeat ended any hopes of a trophy and it cost Wilmots his job. Wilmots did a respectable job as he guided Belgium to the number one rank in world football.

MARTINEZ AND HIS BELGIAN GOLDEN GENERATION

For the first time in almost 60 years, a foreigner was appointed as the head coach of the Belgium National Team. Peter Bossaert the CEO of Royal Belgian Football Association(RBFA) said they believed Martinez was the right man for the job as they thought his experience in managing a diverse group of players would help them.

Martinez, who comes from a neutral background in Belgium, made his ideology clear from day one. Irrespective of what language they spoke the players had to be Red Devils on the pitch and nothing else. Team meetings were held in English a neutral language. The players had to put all their differences aside and fight as one for the national team and start winning.

The 2018 World Cup qualifiers were the first major test for the Red Devils. They passed that test with flying colors as they had an unbeaten record of nine wins and one draw. They had to translate that form into the World Cup in Russia. For the first time in their history, Belgium were considered the favorite at a major tournament. They made a fast start to life as they won all their group stage matches and advanced to the knockouts. Their 1-0 victory over England underlined their credentials.

A Round of 16 clash with Japan tested their mettle as they overturned a two-goal deficit to win 3-2. They showed incredible character in the quarters to defeat hot favorites Brazil 2-1.

The dream ended as they lost to eventual champions by a single goal. Samuel Umtiti scored the goal from a setpiece to break the Belgian hearts and deny the Golden Gen a title. They moved on from the disappointment as they beat England 2-0 and secure a third placed finish – their best ever at a World Cup.

THE RIGHT MAN FOR THE FUTURE?

RBFA and the players Martinez more than anything. Players like Kevin de Bruyne and Jan Vertonghen spoke in favor of the coach many times. The team is enjoying a prolonged period of success. They are the number one ranked side in world football since 2018. There’s only one thing between this Golden Generation and eternal greatness: Trophies.

Players like Dries Mertens, Vertonghen, Witsel, Chadli, Hazard are over 30. Others like De Bruyne, Lukaku are at the peak of their prime. These 2 years are the biggest chances for this Golden Gen to capture at least one silverware. Euro 2020 must be a primary target for the Red Devils. Martinez who got an extra year might be honing his tactics to perfection. He and the RBFA definitely know the importance of coming tournaments. RBFA even said that these two years can define Belgian football on a grander scale.

Roberto Martinez has done a good job till now. He only has to take it to the next level by guiding the Golden Gen to a trophy. If he can do it, Martinez will go down in the history as a legend of the game along with the Belgian Golden Generation