Kelleher the king at Wembley! 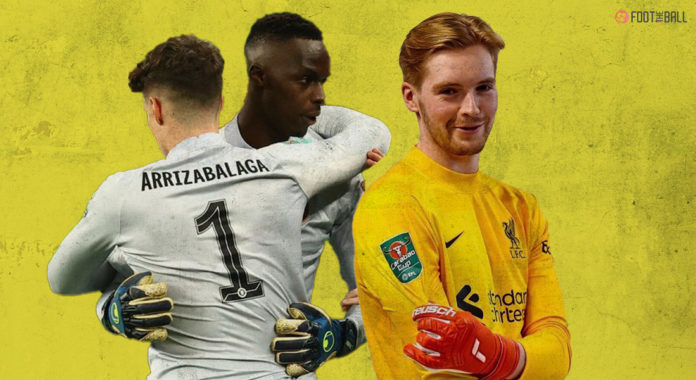 The final of the Carabao Cup pitted two title contenders in Chelsea and Liverpool looking to win the first trophy of the English season.

The Blues made a fast start, Christian Pulisic spurning a golden chance by shooting near Caomhin Kelleher from the corner of the six-yard box with the goalkeeper making a reactive save. Liverpool were not sitting back themselves either, Luis Diaz and Mo Salah making a couple of darting runs down either flank.

HOW DID PULISIC MISS?! 🤯

What an opportunity to give Chelsea an early 1-0 lead in the Carabao Cup final pic.twitter.com/hflgj14BaM

The goalkeeper at the other end came up with an even bigger sequence of saves at the half hour mark. Naby Keita’s shot firm low shot was pushed away by Edouard Mendy straight into the path of Sadio Mane who looked bound to score from two yards out. However, his Senegalese teammate somehow got up high enough to deflect the striker over the bar. Kai Havertz looked to have missed a golden chance one-on-one himself but the offside flag spared his blushes.

Pulisic was the next to have a pop but his strike from a tight angle was a much easier save this time. Mason Mount went really close, volleying a lifted pass from Kai Havertz just wide of Kelleher’s goal after a fantastic run from deep as the halftime whistle went on an exciting but goalless first half.

It was the Englishman again wasted the most clearcut chance yet within minutes of the restart. Havertz’s lifted pass found Mount in behind the Liverpool backline, inside the penalty box and with Kelleher in no man’s land, hit his shot right against the inside of the post before it was cleared.

Salah, like Mount, had a really great one-on-one chance but his chipped effort was going wide but Thiago Silva ran back to hook it clear. The goal for the Reds eventually arrived seconds later. Trent Alexander-Arnold’s free-kick was headed across goal by Sadio Mane before being rifled into the net by Joel Matip. But the goal was ruled out as Virgil van Dijk was adjuged to have impeded Reece James as the set-piece came in and it remained level.

⏱️ 64: Salah is through, dinks it over Mendy but Thiago Silva is there to hook it off the line! #EFL | #CarabaoCupFinal pic.twitter.com/CDpf94YREv

Mendy was being kept fairly busy, this time saving from Diaz whose shot was from a narrow angle. Havertz thought he had finally given his side the lead but was offside. Van Dijk almost won it in injury time but Mendy flew to his right to keep the Dutchman’s bullet header out. Romelu Lukaku had a sharp chance at the near post but Kelleher threw out a boot to keep him at bay as the match headed to extra-time.

90' – Jota earns a corner out of Rudiger. Trent delivers an out-swinging ball and van Dijk's header forces another brilliant save from Mendy.

Lukaku had the ball in the net with a smart finish but was of course, ruled out for offside by the barest of margins. The third such goal of the night to get canceled. Then there was a fourth one in the second half of extra time, with Havertz the unlucky party once again. This match was increasingly looking like heading to penalties. Kepa was brought on by Thomas Tuchel for the shootout as it now became a matter of who holds their nerves.

The spot-kicks were going on in perfect fashion with all of the outfield players across both teams scoring. With Kelleher scoring his, it was up to Kepa to score his to keep the shootout going. However, he blasted his shot high above the bar and Liverpool were champions.

Chelsea come close but no dice

Chelsea had arguably the better chances and in more number but the finishing was really terrible. Mount had one of his poorest nights in front of goal, striking the post when it seemed easier to score was just the icing on top. Havertz was outstanding but was unlucky to be denied twice. However, for all their attacking quality, the hero of the match was certainly Mendy who was singlehandedly responsible for keeping it goalless for so long.

His acrobatic double save in the first half was followed by brilliant stops in the second, and one right at the death. Kepa came on and had the most negative impact as he skewed his penalty high and wide as Chelsea lost at Wembley again.

Liverpool’s defence have always been a problem against a top team and so it proved here as well. They were caught out time and again but for Chelsea’s wastefulness, could have easily lost. Jurgen Klopp’s side had their own chances too, most notably Mane’s effort. Salah’s shooting boots were missing as he fluffed a simple chance by his standards when clean through on goal.

Diaz was a bright spark while Matip’s disallowed goal will be debated no doubt but the team in itself lost its mojo in extra time as they played in a safe manner. Kelleher converted his penalty and had a great hand in the team winning the competition again.

Was removing Mendy the right call?

The biggest call of the night from Tuchel will get a lot of the headlines. Kepa refused to come off in 2019, a final that Chelsea lost. He was thrust in today after strong showings this year itself but the circumstances were different. Mendy had had a brilliant game and was a recent AFCON winner on penalties too. Maybe it would have been better to let him face the penalties and see what happens.