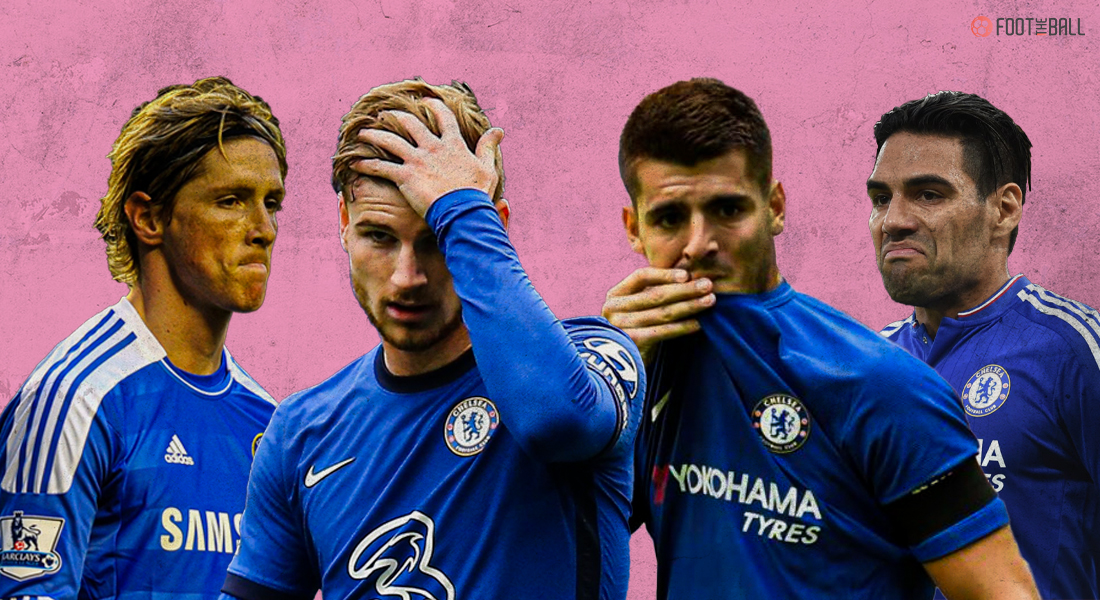 The job of strikers is mostly a rewarding affair. They score the goals, set up their teammates and take major share of the plaudits for when their teams win. But in the history of football, there have been quite a few busts in this area and one team especially has had the lion’s share of bad luck- Chelsea.

The Blues have had their fair share of success over the years including some of the greatest goal-poachers to play the game. Bobby Tambling, Jimmy Greaves, Jimmy Floyd Hasselbaink, Didier Drogba are all names that are revered at Stamford Bridge.

However, since the turn of the millennium, there have been quite a few who didn’t quite workout the same way. Their latest addition is feared to go the same way after last night’s Champion League match against Real Madrid.

Timo Werner, signed from RB Leipzig in the summer for £47.5 million on a five-year contract, has been at the centre of the “cursed” conversation. A man who scored 28 goals just last season in the Bundesliga has been bungling sitters all throughout this season.

Though he has achieved 20+ goal contributions this season, the overwhelming talk regarding Werner is that he is missing a lot more than he should. Moreover the chances being missed are of a high quality, those that a striker of Werner’s quality should be putting away with his eyes closed. In fact, you can make a whole compilation of his misses alone.

Timo Werner has had chances totalling 15.2 xG from non-penalty shots across all competitions for Chelsea in 2020-21.

He's scored eight of these shots, with his 'underperformance' of 7.2 the highest of any Premier League player this season. #CFC pic.twitter.com/ZjkTj79wKD

Most of those have come from inside the box or when he has been left unmarked. Against Newcastle, West Ham, Rennes, Liverpool, and even on international duty for Germany- the theme has been constant. With Werner still young in his Chelsea career, FootTheBall looks at some of the other infamous names to suffer similar fates

The 2004 Balon D’Or winner and AC Milan’s second-highest goalscorer in history with 175 goals, Shevchenko arrived at Stamford Bridge for £30.8 million breaking the record fee paid by a British club. With great expectations right from the start, Shevchenko seemed to have justified his price tag with a debut goal against Liverpool in the Community Shield. After that though, it just started to go downhill.

ON THIS DAY In 2006, @chelseafc broke the English transfer record to sign Andriy Shevchenko http://t.co/T1mZQGAB8W pic.twitter.com/41l2ddB62l

His partnership with Drogba was not producing the desired result that both manager and Shevchenko wanted. He still kept his place as a starter and ended the season with a dismal return of just four goals across 30 league appearances. He had also been injured towards the back-end of the season, and this would become another issue over his career at Chelsea.

His second season was even more dismal as he was restricted to just 17 games in the league which produced five goals. The injury bug was back as well which contributed to him missing large chunks of the season as Didier Drogba established himself as the club’s main frontman. He spent the entire next season on loan at AC Milan, only making a further single appearance for the Blues before leaving for Dynamo Kyiv in 2009.

To be fair, Torres was successful at Chelsea as the club won both the Champions League and the Europa League during his time at the club. Individually though, it’s the remarkable lack of goals which stretched months and some shocking misses which when seen with his £50 million (another British transfer record at the time) that sees him ‘cursed.’

"El Nino" has announced his retirement from football after an 18-year career. 💙

Thank your and all the very best for your future, Fernando @Torres ! 👊#CFC #ElNino pic.twitter.com/daA5WRutZ2

Torres arrived midway through the 2010/11 season, and the Euro and World Cup winner scored his first goal in April – a whopping 15 hours of football later. This turned out to be his only goal in 18 appearances that season.

The next season was even more dismal. He scored two goals in 24 games between October and March, in the FA Cup. He also went six months without a goal in the Premier League during this same time as he finished the season with just six goals in the league.’

The next two seasons combined saw him score 13 goals in the Premier League. He had a stretch of 11 hours without a goal in 2012/13 and just one league goal in the second half of the season. He joined AC Milan on a two-year loan in 2014 before making his way back to his former club Athletico Madrid soon after.

However he will still be remembered most fondly for his contributions in Europe as he won the corner from which Drogba equalised in the 2012 Champions League final as well as scoring the 2013 Europa League final.

The second-shortest Chelsea career in this list (Werner has not finished the season yet), Falcao came to Stamford Bridge on a season-long loan from AS Monaco in 2015/16 for £4 million. The 29-year-old had been one of the most prolific strikers in Europe across spells at Porto and Athletico Madrid with 142 goals in 139 appearances across all competitions. His Chelsea career though never took off.

Radamel Falcao will wear the no. 9 shirt for Chelsea.

He has A LOT to live up to… pic.twitter.com/7cQpXfx6Lm

Having spent the previous season on-loan at rivals Manchester United, Falcao only managed a solitary goal in 10 appearances in the league. He was out injured for considerable portions of the season as well with manager Guus Hiddink not very keen on playing the Colombian striker. Falcao was even dropped from the team’s Champions League squad for the knockouts. He returned to Monaco at the end of the campaign.

The most recent of the names on this list, Morata was another record-breaker in terms of the money spent by the Blues in signing him from Real Madrid. The £60 million man, signed to fill in the departed title winner Diego Costa’s boots, started off in fine fashion with eight goals in eight games including a hat-trick. But that’s as good as it got from the Spanish forward during his England stay.

His first season ended with 11 strikes in the league, but the headlines were all about the striker suffering a crisis in confidence in front of goal. Much like Timo Werner, Moarata had missed a number of golden chances for the club over the course of the season. His second season only yielded five goals and he lost his starting spot with the addition of Olivier Giroud, he left in the winter transfer window in 2019 rejoining Atletico Madrid.

It is far too early to know whether Werner will end up being an addition to this list. He still has more than four more years on his deal and it would take a brave man to bet against the German improving more in the next season.