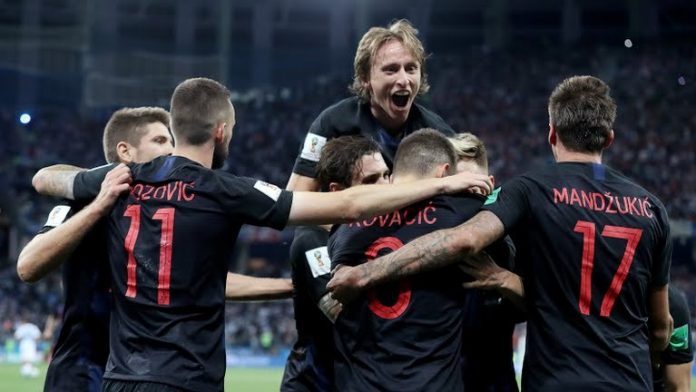 Croatia beat Argentina here at the Nizhny Novgorod Stadium 3-0 on Thursday evening, a victory that lifted them to the knockout stage, whereas the Albiceleste are on the brink of being eliminated.

Ante Rebic first scored thanks to terrible mistake of Argentine Wilfredo Caballero. The Chelsea goalkeeper, attempting to pass the ball to a defender, teed it up to Rebic, before the latter sending it into the top right.

Luka Modric further extended the lead on the 80th minute when the Real Madrid forward evaded Argentina’s Nicolas Otamendi before firing into the bottom corner from 25 meters out.

Ivan Rakitic added one more goal at injury time. After his shot was saved by Caballero, his teammate Mateo Kovacic rolled him back the rebound, with the Barcelona footballer whipping the ball into the bottom left of an empty net.

With the victory, Croatia are able to continue their legend of not losing their World Cup second group games.

Argentina had been close to equalizing 10 minutes later, when Maximiliano Meza received a cutback, but his shot was saved by Danijel Subasic.

It is a very important match for both teams, with Argentina under pressure after an unexpected 1-1 draw with Iceland in the opening game, and Croatia, who hoped to win back-to-back World Cup games for the first time since their debut in 1998, looked to seal qualification for the round of 16.

The fruitless first half started with Argentina having the majority of possession, at 67 percent in the first 17 minutes.

But the Croats proved really threatening. On the fifth minute, Ivan Parisic raced down into the box and fired, but the ball was deflected at the fingertips of Caballero.

Then in the 32nd minute, Sime Vrsaljko sent a cross from the right to Mario Mandzukic, whose diving header went wide left.

On the other side, Argentina has wasted a few chances, especially when Enzo Perez struck at an empty net, only to see his shot wide left of the net.

Lionel Messi, who scored his first goal for Argentina against Croatia in a friendly back in 2006, failed to score again for his team. The Argentina captain had few chances touching the ball, only 20 times in the first half, while his teammate, Sergio Aguero from Manchester City, touched the ball only seven times.

Argentina have been crowned twice in World Cups, with the latest in 1986. It finished second in 2014. The last time Argentina failed to win either of their first two World Cup games was in 1974.

“I think the win was fully deserved, but it wasn’t easy,” said Luka Modric. “That first goal, in the second half, followed a mistake. It was a shot in the arm for us.”

“We’ve emerged from the group after two games. We’ve beaten Argentina with the best player in the world – Messi – and we played a fantastic match, everything was top notch,” said Zlatko Dalic, coach of Croatia. “However, we have to be calm, humble, dignified.”

Argentina reverted to a three-man defence in the crucial game. “I had to devise a plan for this match. If I had set things up differently, things might have turned out much better,” said the disappointed Argentina coach Jorge Sampaoli.

Talking about Messi, who missed a penalty in their opening match against Iceland, he said: “I think because of the reality of the Argentinian squad, it clouds Leo’s brilliance. Leo is limited because the team doesn’t gel ideally with him as it should.”

Albiceleste will play Nigeria next Tuesday, while Croatia meet Iceland on the same day. During their last six matches in the past eight years, the Croats had four wins but in their most recent encounter in 2017 the Icelanders won 1-0.