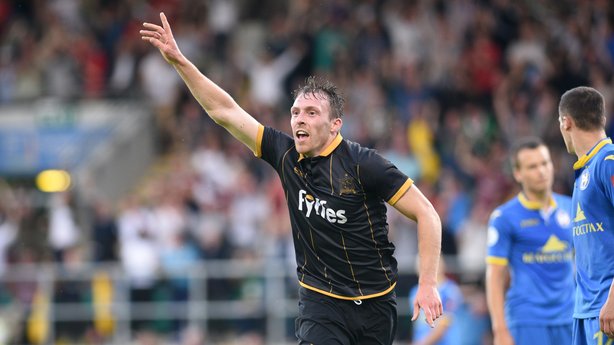 Stephen Kenny’s Dundalk repeated a feat at Tallaght Stadium on Tuesday night to claim arguably the biggest victory of any Irish side in Europe when they overturning a 1-0 deficit away to BATE Borisov with a 3-0 victory at home.

Two David McMillan goals and an injury-time Robbie Benson strike earned the Irish champions a 3-0 home-leg victory that ensured a 3-1 aggregate success over their Belarusian counterparts.

It also guaranteed Dundalk at least a place in the Europa League group stages.

Dundalk were already guaranteed £1m after progressing to the Champions League third qualifying round but that sum has now increased to around £5.9m.

The draw for the final Champions League qualifying round will take place in Monaco on Friday, and Dundalk could meet Celtic should the Scottish champions progress from their tie against Astana of Kazakhstan.

The outstanding ties will be played on Wednesday.

Dundalk’s victory on Tuesday avenged last year’s 2-1 aggregate defeat by the Belarusians in the Champions League second qualifying round.

Dundalk’s stunning Champions League third qualifying round win has earned them more than any other Irish club in a single campaign: a whopping £4.4million and rising.

But the win over BATE Borisov takes them into a whole new ball game, with £2.5m for taking part in the next round, the Champions League qualifier round. Should they lose that, they move into the group phase of the Europa League and collect £1m just for taking part.

Should they win the CL qualifier however they are in uncharted territory for Irish clubs − the Champions League group stage, with six games against some of the biggest clubs in Europe and a guaranteed £8.4million. For winning the SSE Airtricity League last season, Dundalk won £92,500.