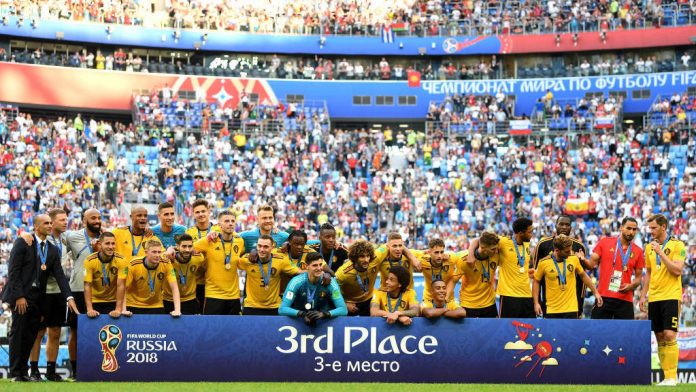 The pace of Eden Hazard helped Belgium to secure their best ever finish in the World Cup on Saturday as goals from full back Thomas Meunier and the winger gave their side a 2-0 win over England in the play-off for third place in the Saint Petersburg Stadium.

Belgium’s third place beats their previous best of fourth in 1986, while the English were unable to go one better than the 4th place their achieved in 1990.

England coach Gareth Southgate, who had 24 hours less to prepare for the game, made 5 changes to the side that lost to Croatia in the semifinals, while Belgium made just three to the team beaten by France.

Meunier, who returned from suspension, showed what Belgium had been missing against the French when he scored from close range after just 4 minutes following Nacer Chadli’s ball from the left and it was nearly 2-0 after 11 minutes when Pickford saved from Kevin De Bruyne after an error from John Stones.

Belgium were picking England off on the break and Lukaku was close to a second, before England woke up with Loftus Cheek producing a good run and Harry Kane shooting just wide.

On the whole Belgium were more dangerous with Eden Hazard seeing a shot blocked and Alderweireld volleying just over the bar and Stones getting in the way of Romelu Lukaku’s effort after a rare error from Harry Maguire.

England replaced Danny Rose and Raheem Sterling with Marcos Rashford and Jesse Lingard for the start of the second half.

England were trying to be patient with Kieran Trippier and Ruben Loftus-Cheek putting dangerous crosses into the box, but nobody was able to apply a finish.

Eric Dier almost equalized in the 70th minute after a move involving Loftus-Cheek, but after lifting the ball over Thibaut Courtois the England midfielder saw the ball cleared off the line by his club-mate Toby Alderweireld.

Dier and Maguire both headed wide as England pressed for an equalizing goal, but it was Jordan Pickford who was called into action to deny Meunier’s stringing volley, although he could do nothing to stop Hazard securing the win with a low finish eight minutes from time.