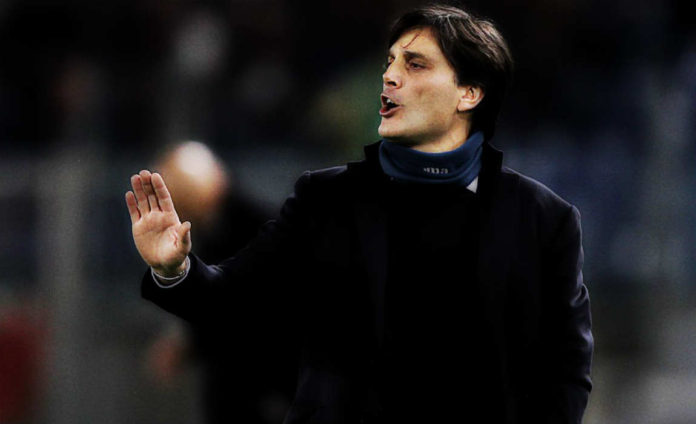 The Rossoneri saw two men getting sent-off and an injured substitute in Andrea Poli complete the match. 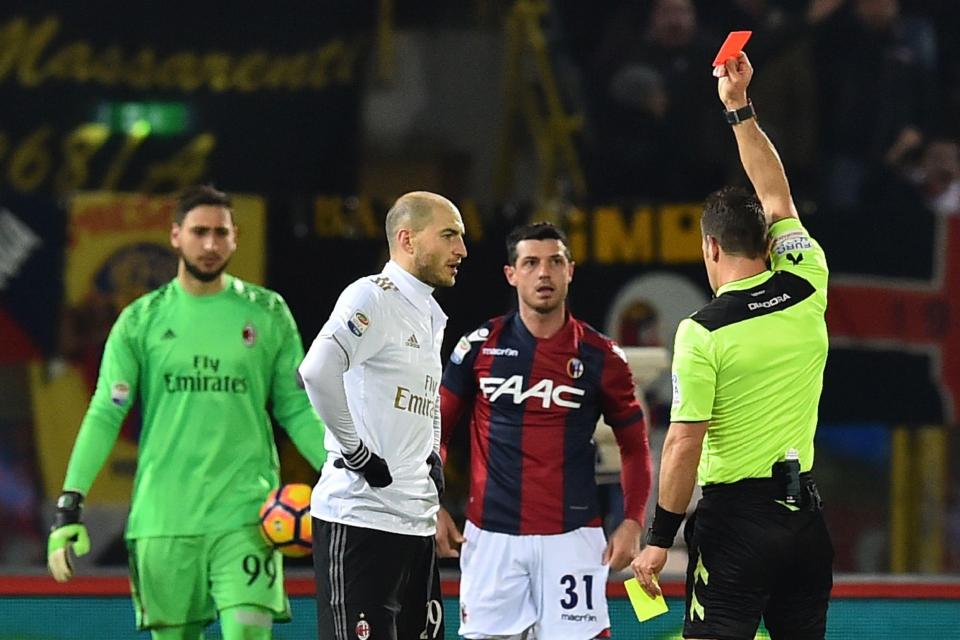 Chelsea loanee Mario Pasalic scored the winner just one minute before the full-time.

Gerard Deulofeu provided an incredible assist to help the visitors to end their miserable losing streak.

The Diavolo saw Gabriel Paletta being sent off in the first half – while Jurja Kucka also saw a red-card just before the 60 minute mark.

Poli, who replaced Calos Bacca as a tactical change after Kucka’s dismissal had to play the final twelve minutes with a limp as he suffered a knee-injury 12 minutes from full-time. 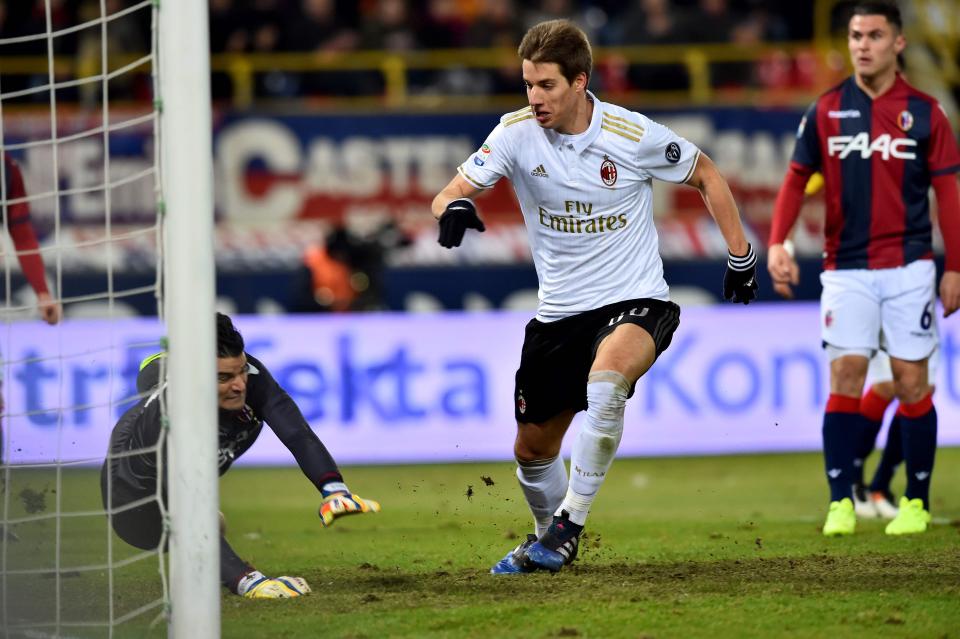 The Milan boss was full of praise for Poli as he said, “I want to compliment Andrea Poli because in a moment of great difficulty he was absolutely essential and helped out every single team-mate,”

“He came on and did great, then he had an injury too so we were basically down to eight and a half men. But he worked so hard and I wanted to single him out for praise.”

“It was difficult to hold in my emotions after the goal, given what we had lived through in a game like that.” 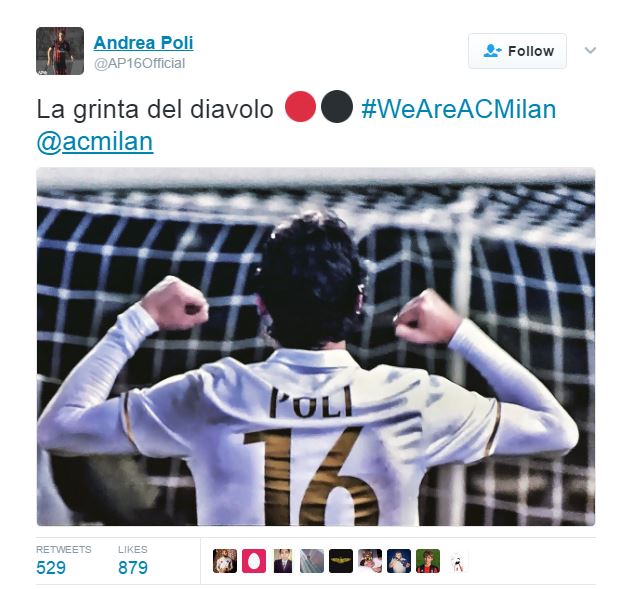 “It is a great victory that is worth more than three points, as it proves this is a team with the attributes of spirit and organisation.”

“We needed this to show ourselves that this spirit was within us and it was a victory earned with sheer determination.”

Poli tweeted after the match as he hailed the Milan spirit and the Rossoneri responded by praising him on a “great match”.

Montella said that he was delighted to gather 3 points, but added that he does not agree with the assessment that Milan were going through a crisis. 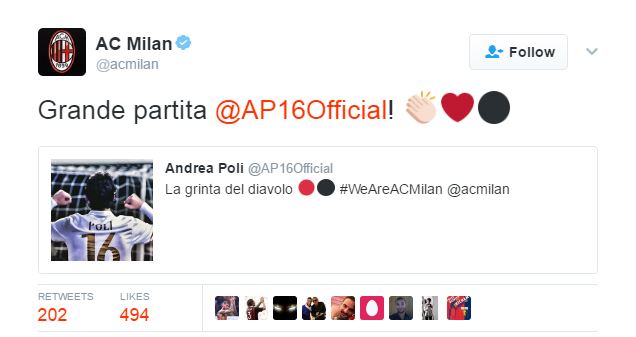 “Naturally there are peaks and troughs in any season, but our biggest problems were many injuries and defeats in quick succession – freakish defeats.

“We lost to Napoli and Juventus who are stronger than us on paper, then against Udinese and Sampdoria we lost the kind of games you usually lose once a season.” 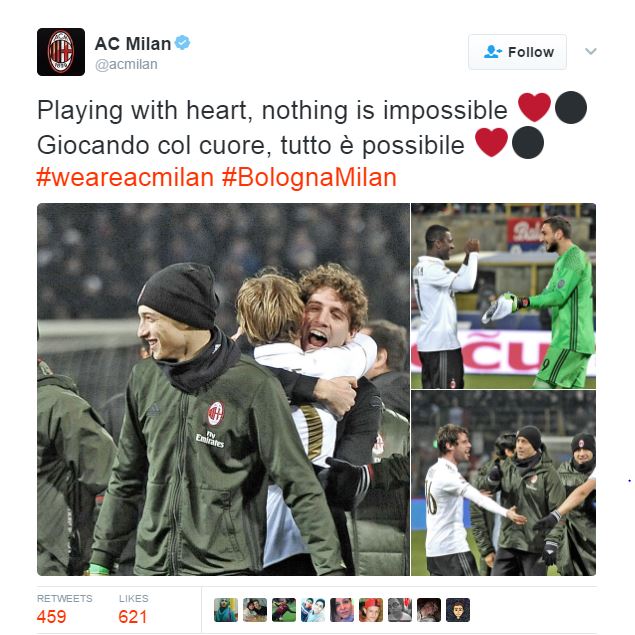 “Our misfortune was losing them all consecutively. Those results made it look as if we were having a crisis but we absolutely were not. The results were bad, not the performances.”

“I told the lads at half-time that this was a game that needed to be a turning point.”

“I had seen teams down to 10 men turn games around, but winning with nine men was even more extraordinary.”