NO MESSI-NG ABOUT THE FUTURE 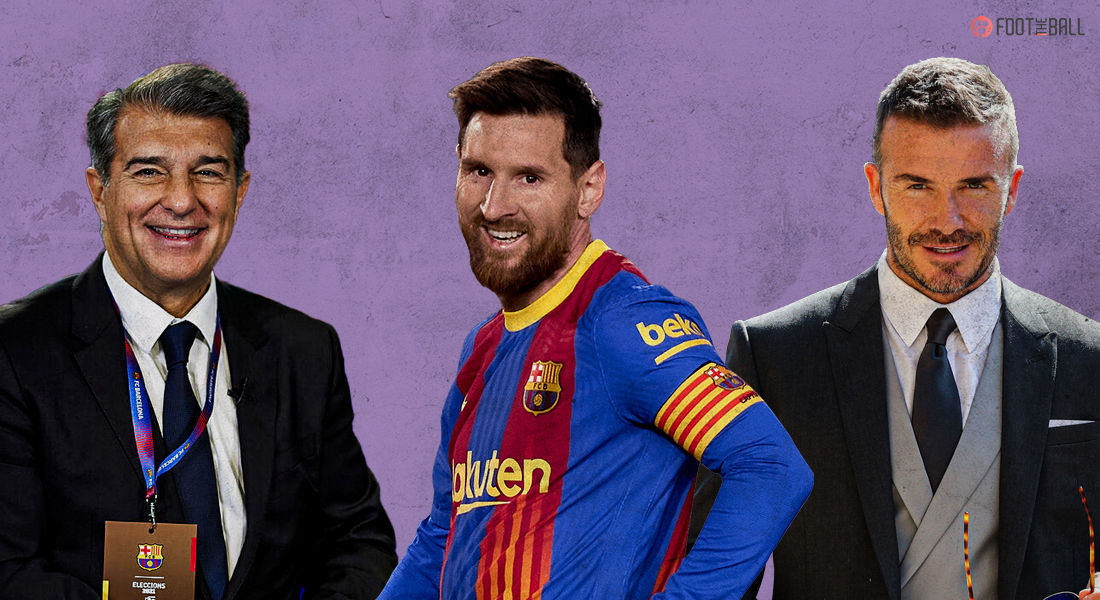 The contract saga involving footballing legend Lionel Messi seems to have taken another fascinating turn. Reports out of Spain indicate that the Argentine superstar will stay with Barcelona for a further two years on a reduced salary package. After the 2022-23 season, the then-35-year-old will head to Inter Miami in the Major League Soccer, whose president is David Beckham. If this were to be true, it would conform to statements earlier made by Messi regarding his future and post-playing career options.

Lionel Messi is close to reaching an agreement for a new contract at Barcelona until 2023.

The contract will include a two-year spell until 2025 with Inter Miami.

Currently on national duty with Argentina for the World Cup qualifiers followed by the rejigged Copa America, transfer speculation surrounding Messi has been around for more than a year. Now it finally seems like we might be heading for a long awaited conclusion.

Messi came incredibly close to leaving the Blaugrana at the start of this season. Under former president Josip Bartomeu, Messi openly talked of leaving. He was extremely frustrated with how the club was being run, how they handled the departure of his close friend Luis Suarez and alleged financial misconduct of Bartomeu. There were also reports that serious offers were made to him by both PSG and Manchester City, with Messi close to joining.

However, the Argentine chose to remain at Camp Nou out of his love for the club and see out the last year of his now expired deal. The season for Barcelona did not go exactly as planned, finishing third in the league after a disappointing finish to the season. However they did win the Copa del Rey, and Messi as usual was supreme all throughout the year. The 33-year-old finished the season as La Liga’s top scorer with 30 goals and a further nine assists to his name.

With Joan Laporta having returned as president in the meantime, the club had been hopeful of being able to keep Messi for more years. Indeed, the new signings by Laporta do seem to suggest that he is showing the club and its fans that Messi will have more help for next season. Barcelona have already signed Mess’s international teammate Sergio Aguero and  defender Eric Garcia as free agents.

Barcelona have some 𝗦𝗘𝗥𝗜𝗢𝗨𝗦 firepower leading the line… 🔥😵

They might soon be joined by the Dutch duo of Gini Wijnaldum and Memphis Depay to bolster their ranks. Laporta has even said that contract talks with Messi have been started and are progressing well, though nothing has been signed officially as of yet. Which brings us to this latest chapter in this fascinating tale.

WHAT DOES THE CONTRACT MEAN

In light of Barcelona’s woeful financial conditions, there has been no doubt that any contract offered to Messi will certainly be less in wages. The Argentine can still perform at the most elite level, and having seen Laporta sign strong options to push for the title next year, is now willing to stay. His two year contract at Camp Nou will segue into a two-year stay in the US. Here comes the most interesting part.

🗣"I must say things are going well, but it's not done yet."

Messi had spoken of his inclination to experience football in the United States previously, and many will feel this is the perfect swansong for a great career. Inter Miami are always on the lookout for superstars, and have also signed former Juventus and PSG midfielder Blaise Matuidi and Messi’s former teammate Gonzalo Higuain in the recent past.

Gonzalo Higuaín has reached an agreement in principle to sign for Inter Miami. He is set to join his former teammate Blaise Matuidi in MLS. (Source: TyC Sports) pic.twitter.com/6SLxLKxn5R

Getting Messi will of course be the most serious of the lot and will be another major feather in the cap of David Beckham’s ownership of the club, and he has expressed his desire of getting the best to the country and boost the MLS. Furthermore, the contract states that post 2025, Messi will return to an off-field role at Camp Nou for six years till 2031, another wish that has been publicly expressed by him in the past.

Though nothing has been made public yet, either by the club or the player himself, this latest offering does seem in tune with a lot of Messi’s intentions. Furthermore, he also bought a luxurious apartment in Miami in April, which suggests that moving there is definitely a part of his career trajectory.

No matter when he does leave Barcelona, whether now or two years later, Messi will not be short of potential suitors with PSG and Manchester having been touted as possible destinations. However, it does seem increasingly likely that for the time being, the one-club man is not going anywhere yet.