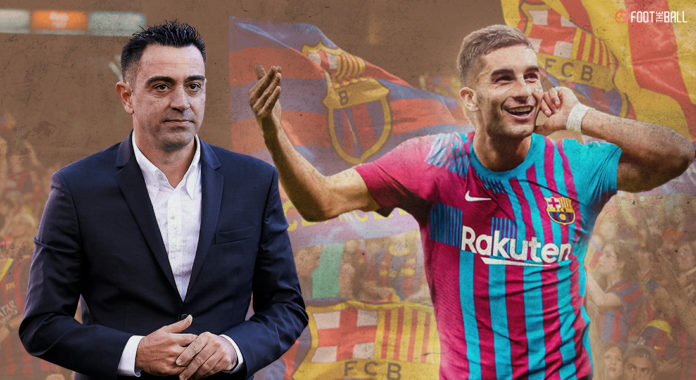 One of the more surprising transfers of recent times is now official. Barcelona have announced the signing of former Valencia academy player Ferran Torres. The transfer fee, believed to be around €55m guaranteed, along with add-ons, will be a subject of debate depending on the player’s performances.

Torres, who has been out injured since October and has not played for Manchester City since September, emerged as a surprising target recently. It has been reported that Xavi earmarked Torres as the most important addition to Barcelona’s floundering attack. So what does the Spanish international have that made him such a favourite for the Blaugrana?

Torres had started the season in brilliant form, having three goal contributions. Pep Guardiola used him as the central striker, with Gabriel Jesus operating from the right. The fact that he played well enough in an almost new position at City certainly helped in Xavi’s thinking.

Ferran Torres joins Barcelona. Exciting young attacker, skillful, good at attacking spaces and stretching the pitch. Scores goals too. Returns to LaLiga a better player than the one who left. Expect him to do very well for Xavi’s Barça… #FCB https://t.co/jQvyQ2CstY

Barcelona have been trying a number of options in their front three, with varied success. Memphis Depay’s goals have dried up a bit after a blistering start. Philippe Coutinho remains woefully out of form while Ousmane Dembele has just returned from another lengthy absence. Luuk de Jong has…struggled, to say the least, and could well be on his way out in January.

🚨🚨[ @ffpolo🥇] | JUST IN: Barça, Sevilla and Cadiz have reached an agreement on the transfer of Luuk de Jong. Only the player’s green light remains. #fcblive #Transfers pic.twitter.com/CJMoM8DDAg

Martin Braithwaite remains out injured and his return does not look likely soon. Sergio Aguero obviously retired in the saddest of circumstances. In this regard, Xavi has had to lean more and more on the academy graduates. To their credit, they have stepped up with some strong performances. Abdi Ez, in particular, has been electric every time he has taken the field.

However, the youngster will be leaving for the AFCON in January, and with Yusuf Demir’s loan spell also on the verge of ending, reinforcements were a necessity. Barcelona are desperately trying to close the gap to the top-four, and move back into the Champions League places but it’s not proving easy.

Their porous defence looks in need of an overhaul but the attacking addition also makes sense.

WHAT DOES TORRES BRING?

The next obvious question is how Torres can improve Barcelona. Xavi has been sticking with the 4-3-3, meaning Torres can either play through the centre or on the right. The latter seems to be improbable given Dembele’s return and Xavi’s insistence on wanting the Frenchman to sign a contract extension. Dembele, being left-footed, loves coming inside and crossing/shooting so Torres will not see much game time here when the former remains fit.

Playing centrally is the more viable option for two reasons. One, he has already played in that system under Guardiola using pace, agility, and accurate shooting. Two, Depay has played a lot this year down the left hand side, where he loves to take defenders on. Granted that has reduced his scoring rate but with Torres coming in, this looks like a worthy change.

🇪🇸: Since his debut in September 2020, Ferran Torres is the top goalscorer for Spain with 12 goals in 22 games.

• He averages 0.54 goals per game, a better record than many top forwards.

• Torres can play anywhere in the attack. Xavi values this a lot.

It goes without saying but the need for Torres to hit the ground running is great. He averages 6.02 touches in the opposition’s penalty area and 7.31 progressive passes received (both P90). His signing represents a clear indication of Xavi not entirely satisfied with the front line currently, and there should be exits coming.

As to questions on how Barcelona were able to afford the sizable transfer fee, president Joan Laporta had recently taken a loan in excess of 500m euros from Goldman Sachs, with the primary objective of revamping the Camp Nou.

The major problem at Manchester City had been the lack of chances to feature for Torres. City have one of the best and enviable frontline in the world so it is little surprise that he looked for other opportunities. Too often in his career he has been given few opportunities to showcase his talent. That will definitely not be the case in a rebuilding side which prioritizes young players who are willing to give their all for the club. Xavi knows he can get the best out of Ferran, whether it be scoring goals or linking up play. Barcelona have gone in hard for the player and now it’s time for the results to be seen.