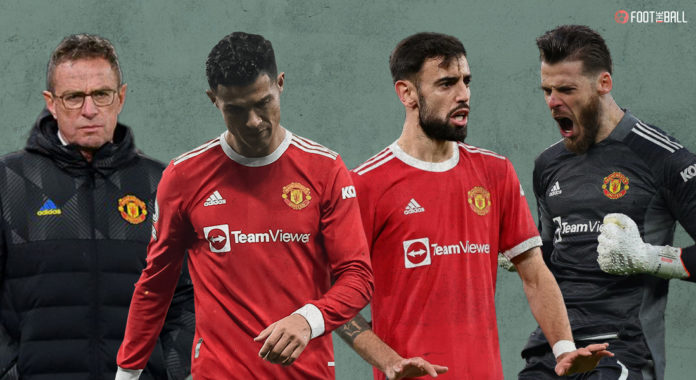 This was supposed to be over, right? It was not to happen in back-to-back matches, right? Yes, but it did and chances are it is very likely to repeat a third time. Manchester United struggled mightily against 19th-placed Newcastle United, trailing for more than an hour before eventually securing a draw.

Manchester United drops points after Newcastle holds them to a 1-1 draw 😬 pic.twitter.com/vmTLgSFfRJ

Truth be told, they could have lost the match just as easily, having to thank the post and David De Gea in helping preserve the point. Ralf Rangnick’s impact has not been fully clear yet, and it should be the time to consider that maybe the players are at fault now. So, what can be improved and what should be just accepted for the way they are?

NO COHESION IN DEFENCE

Rangnick went with the 4-2-2-2 once again, with Scott McTominay and Fred at the base of the midfield. Marcus Rashford and Bruno Fernandes were paired together which meant leaving Jadon Sancho out, a decision many felt was harsh. The formation severely limited the width of United, who were having to rely on Diogo Dalot and Alex Telles.

Recovered well from an early error on his return to action. 💪🇫🇷 pic.twitter.com/bnYEPGXIdT

Dalot, in particular, was really poor, completing just one of his crosses. Harry Maguire’s continued selection is as baffling a decision as any in football right now. His hesitant play combined with a lax approach to stopping Allan Saint-Maximin resulted in the opener. Raphael Varane may have given the ball away but Maguire was shambolic all evening.

©️ Is Harry Maguire the right man to captain @ManUtd…?

He allowed Ryan Fraser through in the opening minutes and also idiotically fouled Callum Wilson when there was no need to. Saint-Maximin gave Maguire the run around all evening long, underlining the slump in form the captain is in currently. Little things but those United could certainly do without.

🗣 "We shouldn't look for excuses, we just need to get better."

Ralf Rangnick on whether the 16 days off is an excuse for their performance against Newcastle pic.twitter.com/gxH7nzQpaX

Victor Lindelof should be given a serious lookin for the next match, alongside Varane. Eric Bailly’s erratic play makes him a liability that Rangnick would not want to test out.

Cristiano Ronaldo berating his teammates on the pitch in the first half created quite a stir, the Portuguese clearly unhappy with the effort being put in. The simple fact was that United were unable to match the intensity and tempo of the game, looking like individuals rather than a competent team.

Gary Neville on Cristiano Ronaldo and Bruno Fernandes complaining and not clapping the fans at full-time." #mulive [@footballdaily] pic.twitter.com/y33yRSzLNU

Bruno Fernandes was furious with everyone, from the officials to the match ball itself rather than his own play. His poor form has been a key factor in United really dropping off in attack, in the absence of Paul Pogba. Similarly, Marcus Rashford has been going through a horrible path in front of goal, epitomized by an attempted cross that ended up as one of the most spectacularly failed shots of the year.

Shocking stats from Rashford and Bruno Fernandes. Won't be surprised if Ralf Rangnick drops them for Sancho and van de Beek against Burnley. #mufc pic.twitter.com/S6oNsvpGmd

Mason Greenwood was taken off at halftime, with Jadon Sancho providing a much needed impetus in the second half. Edinson Cavani was another positive addition, willing to get himself firmly into the mix and take the game to Newcastle.

Fred and McTominay were outplayed by…Joelinton and Sean Longstaff. The Brazilian, playing in midfield, was an absolute beast in winning balls and outmuscling the Red Devils all over the park.

Even the Magpies’ forward threat was much more as highlighted by them having an xGOT of 2.30 as compared to United’s 0.68. Rangnick was visibly frustrated with the performance throughout the match, a sentiment shared by fans across the world.

In the second half, even with Newcastle sitting deeper, it was them who had the best chances to score. United had their moments but they were mostly borne out of luck or error. And luck eventually runs out.

MORE THAN THE MANAGER

It was widely felt that Ole Gunnar Solskjaer was failing to get the best out of this super squad, which led to his sacking a month ago. Rangnick’s arrival has failed to calm nerves so far. United have scored a goal apiece in each of his four games, squeaking by Norwich City last week thanks to a penalty from Ronaldo.

😬 “It wasn’t a lack of effort, it was a lack of cohesion. It was like watching Leeds play at their worst…”

👀 “If that performance happened under Ole he’d have been slaughtered.”

There was to be no such luck here for the Red Devils, as they never really got going in the final third. Cavani tried his best to turn the game single handedly, but even his goal was fortuitous, needing a second attempt. The truth of the matter is United have come to rely on moments of brilliance for far too long, rather than actually having a solid game plan and control during games.

😬 @ManUtd lost possession 167 times against @NUFC, their highest total in the @PremierLeague this season…

More often than not, it looks like 11 players who are trying whatever they can to do their jobs to the minimum of abilities. Frustrations are clearly getting the better of United, and they can ill afford to drop points in eminently winnable games.

"They got the last manager the sack. Ralf Rangnick isn't going to be sacked — but they'll get a lot of managers sacked if they carry on like that." 😡 #MUFC pic.twitter.com/zk3pFBK8oJ

It has to be seen what kind of reinforcements, if any, arrive in January but with the quality of players already at Old Trafford, they should really be aiming for more.