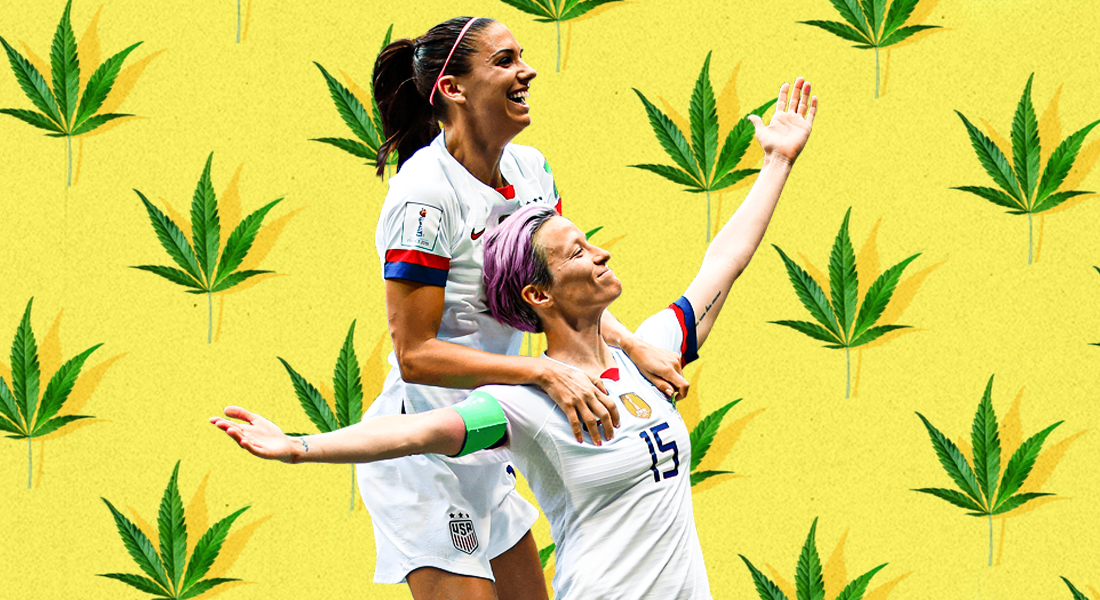 A silent revolution is brewing in the world of football as the World Anti-Doping Agency (WADA) has officially removed ‘cannabidiol’ from the prohibited in-competition substance since last year, enabling football players to use CBD.

“Use of CBD is linked to demanding better workplace conditions,” says Megan Rapinoe, in an interview for Green Entrepreneur.

“We put our bodies on the line, especially the more contact-oriented sports, and so I think that if athletes are pushing this forward and being at the forefront of this, demanding better workplace conditions, a safer way for them to be their best selves on the field and a safer alternative to pain management because pain management and injuries are all part of being an athlete, just part of the nature of it, I feel like it’s coming from within for these very valid reasons, I feel like that can be really powerful in moving conversation forward,” says Rapinoe, one of the most recognizable women’s soccer players on the planet, on the use of CBD.

In an interview with the Boston Globe in 2019, Megan Rapinoe opened up about the usage of CBD for athletes highlighting some interesting benefits the plant based compound offers.

She was quoted saying “Still, to this day, I think if I wanted to find somebody to give me an opioid prescription or a sleeping pill prescription or some other prescription drugs, I think that that would in many ways be easier and technically legal to give. Which, I think we’re seeing right now, has been horribly damaging to our country and to athletes as well”

In recent times explorative studies have shown evidence that CBD can help Athletes. It has proved to have positive physiological, biochemical, and psychological effects.

This has resulted in more and more athletes jumping on the CBD bandwagon and some have even started endorsing certain CBD products.

CBD or Cannabidiol has garnered a lot of attention from everyone in recent years and rightly so anecdotal evidence has shown that it has many properties that help with relieve from many symptoms.

A by-product of the Cannabis plant, CBD does not have any ‘Intoxicating’ effects it is one of the main compounds in the plants’ make up. The other most known compound which is known for its ‘Intoxicating’ properties, is THC (Tetrahydrocannabinol).

The therapeutic value of the CBD has well been established attracting athletes as its turning to be a more organic substitute to opioids and chemically synthesized pills, for pain relief, sleep and Anxiety.

The benefits of CBD oil are incredible. We are developing some unbelievable products and will be close to launching VERY soon!!! #CBDProducts #CBDOil #CBD #ForSportCBD #ComingSoon pic.twitter.com/0yIRXwbwhy

During a game a footballer may go through numerous stressful situations that they must adapt to and overcome, not just that  playing at the highest level in front of millions as your livelihood is a daunting task. The combined stress on a professional footballer can be devastating.

Stress is also seen as the biggest hindrance to peak performance is sports psychology. It has proved to hinder decision making and analytical skills much needed to make a split second decision in fast paced sports.

Even finding the sweet spot between over-training and rest to remain fresh is essential to a footballers performance making their life feel supremely regimented. CBD helps football players find that sweet spot. Consistent intake helps professional footballers push stress induced limitations, helping them to grow constantly while the body and mind are under pressure and stress.

CBD ACTS AS AN ADAPTOGEN FOR PLAYERS

Reishi mushrooms and Echinacea are some plant- based Adaptogens that boosts recovery. It helps the player’s nervous system recover and doesn’t allow the neuroendocrine system from overreaching. This helps footballer’s maintain homeostasis in stressful situations and helps the athletes internal system to maintain balance, which in turn boosts recovery.

Football players are thus adopting the use of CBD as it fits the description of an Adaptogen perfectly as it is non-toxic and stimulatory in nature.

CBD also helps to replenish the fluids that act like sheath for the central nervous system. Due to the overactivity caused between neurotransmitters after the intake of CBD, the stimulus which is often dulled in sports is sharpened. CBD is being used by Football players to keep their mind active even off the field.

Due to CBD the suppressed effects of stress are also not felt by the central nervous system which helps the muscles recover faster from burnout. CBD has become an essential tool for footballers against Central Nervous system burnout.

Sleep is an essential part of recovery and a professional footballers regiment. More sleep results in more time for the tired muscles to recover. By controlling Cortisol levels CBD inhibits in a more restful sleep that allows faster recovery in a shorter time.

In some cases  CBD has also shown to improve the circadian rhythm of footballers and athletes alike.

Muscle relaxers are often used by professional athletes to overcome grueling sessions, and CBD is one the best organic relaxers out in the market. It inhibits GABA (gamma-Aminobutyric acid) which is the body’s primary inhibitory neurotransmitter , thus CBD helps football player’s bodies to relax and maintain a state of calm much more easily, in turn aiding their recovery process.

When a sore neck from golf or other pain pops up, turn to CBDMEDIC products to help you get back to doing what you love. 🏌️⁣ ⁣

Learn more about how our CBD products can be used to help you be your best on the green. https://t.co/6vTLztgU1D pic.twitter.com/U966Q5WHit

Inflammation is a massive barrier to any professional athlete’s recovery. By regulating apoptosis, inhibition of cell proliferation, suppression of cytokine production and induction of T-regulatory cells (Tregs), it helps reduce chronic inflammation. This makes sure that Footballer’s recovery doesn’t suffer due to inflammation and the effects of soreness are also reduced.

Megan Rapinoe, is one of the biggest advocates for the use of CBD by professional athletes to improve performances. The US women’s team legend openly talks about the subject and her role in making CBD an acceptable source to help footballers improve their performances, and we at FootTheBall would like to commend the  Olympic gold medalist and two-time Women’s World Cup champion for that.