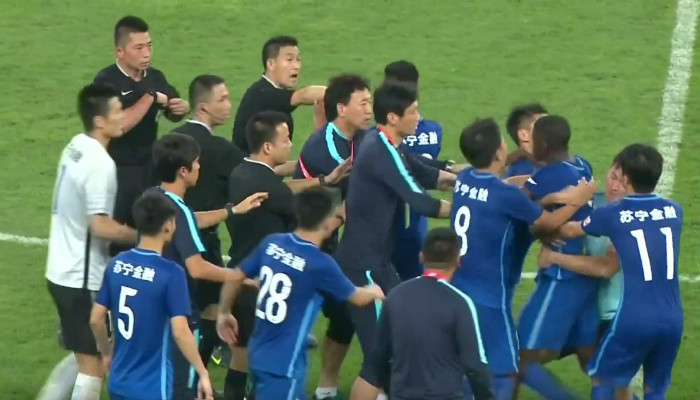 Former Chelsea star midfielder Ramires ran towards the referee with an intention to attack him after he received a red card after Jiangsu Suning’s 2-1 loss to Shandong Luneng Taishan.

After making a switch to Chinese Super League from Premeir League club Chelsea at the beginning of 2016, Ramires has established his class at Jiangsu Suning, but now he could face the ire of his club and the league officials after trying to physically attack the match official.

Things took an ugly turn when Ramires was shown a red card at the end of Jiangsu Suning’s humiliating 2-1 defeat to Luneng Taishan who sit at the bottom of the league table.

However, the entire situation turned worse when the Brazilian midfielder ran towards the referee with an intention to attack him.

However the former Chelsea star was held back by team-mates but he broke loose and attempted a run towards the referee, but was finally stopped by his teammates and convinced to leave the field.

Ramires has been under the radar of European clubs this summer with rumours linking him with a potential move back to Europe this summer.

Inter Milan have shown interest in the former Chelsea man after Suning’s owners have bagged 70 per cent stake in the Italian club.

“Inter Milan, they’re a club that needs no comment and I think fondly about the chance to play in Italy,” Ramires said last month.

“But for now there’s nothing concrete. I’m happy in China. My focus is to continue helping this project with Jiangsu.”