BULLS ‘BULLDOZING’ AFTER THIS SUMMER? 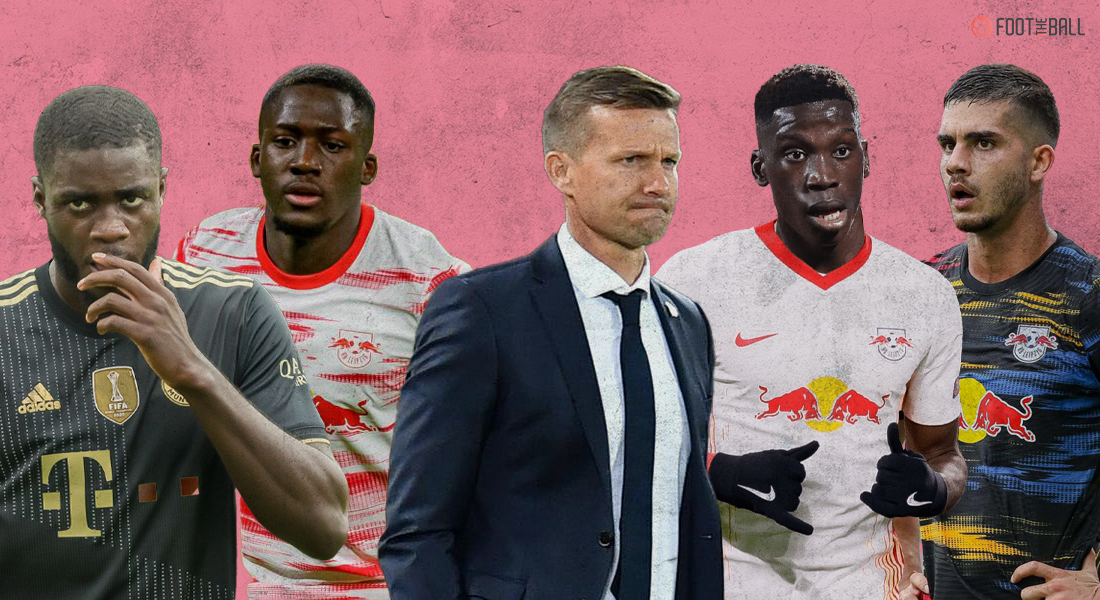 The shuffling of the decks in Europe has finally come to a close with the summer transfer window ending on the 31st of August. Teams witnessed a jaw-dropping transfer market as some of Europe’s elites switched jerseys this season. One team who had a fairly poor transfer window were the German runners-up of last season, RB Leipzig. The team lost three crucial players Ibrahim Konate, Dayot Upamecano, and Marcel Sabitzer along with their star manager Julian Nagelsmann.

While on the other hand, RB Leipzig didn’t purchase some big names this season. Young defenders were roped in as Konate’s and Upamecano’s replacements’ while Andre Silva was purchased to lead the forward battery. As the new Bundesliga, summer kicks off we at FootTheBall find out how RB Leipzig fared in the summer window of 2021?

The Red Bulls trusted their youngsters when shopping in the summer window. RB Leipzig finished 13 points behind champions Bayern Munich last summer and would have wanted to improve their score this season. Although they conceded just 32 goals (the least number of goals in the whole league), the German side wasn’t fruitful while on the attack. To improve their goal-scoring form, Portuguese striker Andre Silva was shipped in from Eintracht Frankfurt. He scored 28 goals last season in Germany’s top division, earning the second spot on Bundesliga’s Top Goalscorers List.

The Red Bulls captured the signature of Barcelona’s rising baller Ilaix Moriba on deadline day. The Spanish footballer left his boyhood club to join Leipzig at the end of the summer window as Moriba’s presence bolsters their midfield. The youngster could replace the departing Marcel Sabitzer in the centre of the pitch.

💪 @IlaixMK already getting straight to work ⚽

Angelino agreed to spend another year at the club after being loaned out by Manchester City. He’s been a crucial and dedicated servant of the club and he could form a formidable partnership with their star-signing Andre Silva.

The biggest problem for Leipzig would be to replace Dayot Upamecano and Ibrahim Konate who has signed for Bayern Munich and Liverpool respectively. But to solve Leipzig’s defensive mystery the club roped in a young centre-back. French defender Mohamed Simaken was purchased from Ligue 1 side RC Strasbourg to strengthen the German side’s backline.

Dutch striker Brian Brobbery also arrived in Germany after his exploits in the Eredivise. He could be a perfect secondary to Andre Silva or Jesse March could play two strikers with Brobbery and Silva leading the line. Benjamin Henrichs returned from his loan spell in Ligue 1 as he is back in Germany to prove himself.

RB Leipzig lost several big names this summer which could hamper their hunt for silverware this summer. First defender Ibrahim Konate was shipped to English giants Liverpool, and then Bayern Munich purchased both Dayot Upamecano and Marcel Sabitzer.

The German outfit lost both their captain and star defender to the Bavarians while their manager became the new chief of Bayern Munich. Konate and Upamecano formed a commendable centre-back partnership and their departure could leave a big hole in Die Rotten Bullen’s backline.

While you could argue that RB Leipzig has made some impressive signings these unfortunate departures will surely trouble them in the long run. South Korean footballer Hwang Hee-Chan was loaned out to the Premier League as the forward would don the Wolves jersey.

🇰🇷 Hwang Hee Chan makes his way to the @premierleague with Wolverhampton Wanderers!

Attacking midfielders Hannes Wolf and Lazar Samrdzic both lost their place in Lepizig’s roadmap as the creative playmakers were transferred to Borussia Monchengladbach and Udinese respectively. The purchase of Ilaix Moriba from Barcelona might have influenced the deal as the Spanish youngster was influential in the latter half of La Liga.

Another deadline day transfer, English striker, Ademola Lookman returned to England as he was loaned out to Brendan Rodgers’ Foxes this summer. Lookman played for Fulham last year scoring 4 goals and assisting 4 times in his stint at Craven Cottage. Unfortunately, the youngster fell out of favour at Leipzig and has been a part of the ‘Loaned List’ for the past year.

Alexander Sorloth, the Norweigan centre-forward was bought from Crystal Palace in the last summer window by the German giants. He started 13 times last season but scored just 5 goals putting his place in danger. The arrival of Andre Silva meant that Sorloth lost his place in Lepizig’s eleven. He was transferred to the Spanish side Real Sociedad on a loan deal for 2 million euros with an option to buy. Attacking midfielder Caden Clark and right-winger Fabrice Hartmann couldn’t also make the final roster as they were purchased by New York Red Bulls and SC Paderborn.

While other teams fared this season RB Leipzig might have had a poor transfer window according to their standards. Although the departures of Konate and Upamecano swept in funds for the club in a time of misery, they also lost some solid defensive prospects.

The two could have been the future of the club considering Leipzig conceded the least amount of goals in the Bundesliga last summer. But to overcome the void, Leipzig purchased a young centre-back from Ligue 1 and it’s yet to be seen if he could put in a shift in the Bundesliga.

While Leipzig’s biggest problem last season was scoring goals, they have bought in Andre Silva to solve that problem. The Portuguese striker restored him from last summer and along with the other forward stars, he could solve their goal-scoring problem.