Did We Witness the Greatest Day in the history of the Euros? Spain and Switzerland through; Croatia and France ousted in Mind-Boggling Monday Matches

Spain clashed with Croatia and France locked horns with Switzerland in the Round of 16 in Euro 2020 on Monday, 28th June 2021. It was supposed to be just another day in the football calendar. But fate had other plans for football aficionados all across the world.

Monday is categorised as the most boring day of the week. One gets up to go to work and deal with the Monday blues. It isn’t a day on which you would expect any kind of excitement or adrenaline rush.

But the football world, particularly in Europe, went through a whole flurry of emotions that are difficult to describe and put into words on Monday, 28th June 2021.

WHAT A DAY OF FOOTBALL 🤯 pic.twitter.com/Mj2g3UBVCH

The Round of 16 matches between Spain-Croatia and France-Switzerland served up a real treat for spectators and viewers all across the world.

Goalkeeping howlers, breathtaking and silky smooth football, last-gasp equalisers and things going right down to the wire in a penalty shootout.

No team in Euro history had trailed by multiple goals after 80 minutes and not lost in 90 minutes.

Monday, 28th June 2021 will be remembered as perhaps the most exciting and thrilling day in the history of international football for years to come in which Spain and Switzerland created history

FootTheBall takes a look at the day that had it all for football fans and how it all unfolded to the delight of billions of viewers and football aficionados.

The day started with Spain’s match with World Cup runners-up Croatia in Copenhagen. The Spaniards were up to their usual passing style that saw them keep possession of the ball for large parts of the match.

But a mistake by Athletic Bilbao’s Unai Simon led La Roja to concede an own goal after the 24-year old goalkeeper was unable to control a pass from Barcelona midfielder Pedri. 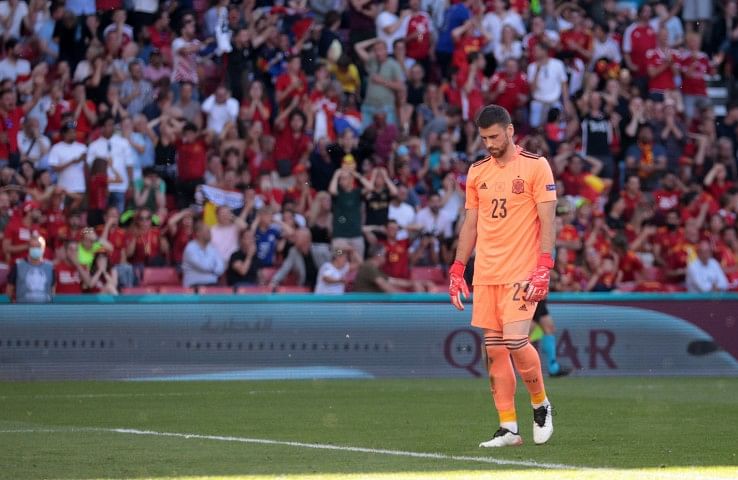 Croatia gained confidence after this error by Simon and the Croats pushed forward to extend their lead. But Spain responded as Pablo Sarabia restored parity before half-time.

As all players headed down the tunnel the score line in Copenhagen read 1-1. No one in their wildest dreams or imagination could have predicted what would follow in the second half.

FLOODGATES OPEN IN COPENHAGEN IN SECOND HALF

Spain turned the result on its head after Cesar Azpilicueta headed the Spaniards in front early on in the second half.

What a time to score your first international goal! 👏👏👏

And in the 77th minute it all looked done and dusted as Ferran Torres scored for Luis Enrique’s charges to put the result of the match beyond doubt….temporarily.

The Croatians rallied in the last five minutes of regulation time as substitutes Mislav Orsic and Mario Pasalic scored in quick succession to take the match into extra time.

And as extra time started, Alvaro Morata silenced his critics by scoring with an excellent finish to give Spain the lead once more. Three minutes later Mikel Oyarzabal increased their lead by two goals as he scored his first goal in Euro 2020.

120 minutes. 8 goals. Inexplicable drama. The match ended Spain 5-3 Croatia (a.e.t.) as the audience witnessed the second-highest scoring game in the history of the European Championships.

La Roja, meanwhile, became the first side in the history of Euros to score 5 goals in two consecutive games

As the dust settled on the Spain-Croatia match, fans and pundits turned their attention towards the next match – France vs Switzerland. Everyone was expecting it to be a walk in the park for Les Bleus.

But this match too followed the script of the previous one as Switzerland went ahead after Haris Seferovic headed the ball in the back of the net. The French did make a comeback in the second half.

The trident of Griezmann-Benzema-Mbappe clicked to combine for two goals in two minutes to turn the tie on its head as Switzerland were left wondering what went wrong.

And Paul Pogba’s curling effort that nestled in the top right corner apparently secured France’s passage to the quarter-finals, before they crumbled in the last nine minutes of the second half.

Seferovic completed his brace in the 81st minute to give the Swiss hope in the National Arena and Mario Gavranovic completed the dramatic comeback in the very last minute of regulation time.

The Swiss were back on level terms, back from the dead, refusing to surrender to the world champions. Extra time followed in Bucharest that didn’t witness any goals.

It all came down to penalties. Unai Simon had started the day with his bizarre blooper and here it was down to the goalkeepers – Yann Sommer and Hugo Lloris – to rescue their sides.

Every penalty taker from every team was up to the task at hand until the very last penalty remained to be taken.

Up stepped young starlet Kylian Mbappe to draw France level with Switzerland, but the 22-year old missed as Sommer dived to his right to save the shot.

If someone asks you why you love football, just show them this Switzerland fan… pic.twitter.com/fyNy2h5e72

And they did it against none other than the world champions France. It was poetic justice after all that both these matches had the exact same scoring pattern in regulation time.

Fans witnessed blitzkrieg on the pitches in Copenhagen and Bucharest as 14 goals were shipped in by the four teams. Unai Simon redeemed himself for Spain after making a comical mistake to let in an own goal.

And in the other match, Yann Sommer led his country to their first ever European Championship quarter-final after saving from Kylian Mbappe in a penalty shootout that went right down to the wire.

It was, in effect, a historic day for the sport of football and it might just have been the best day for international football. Will this feat be achieved in any other tournament on the international stage in football? Only time will tell