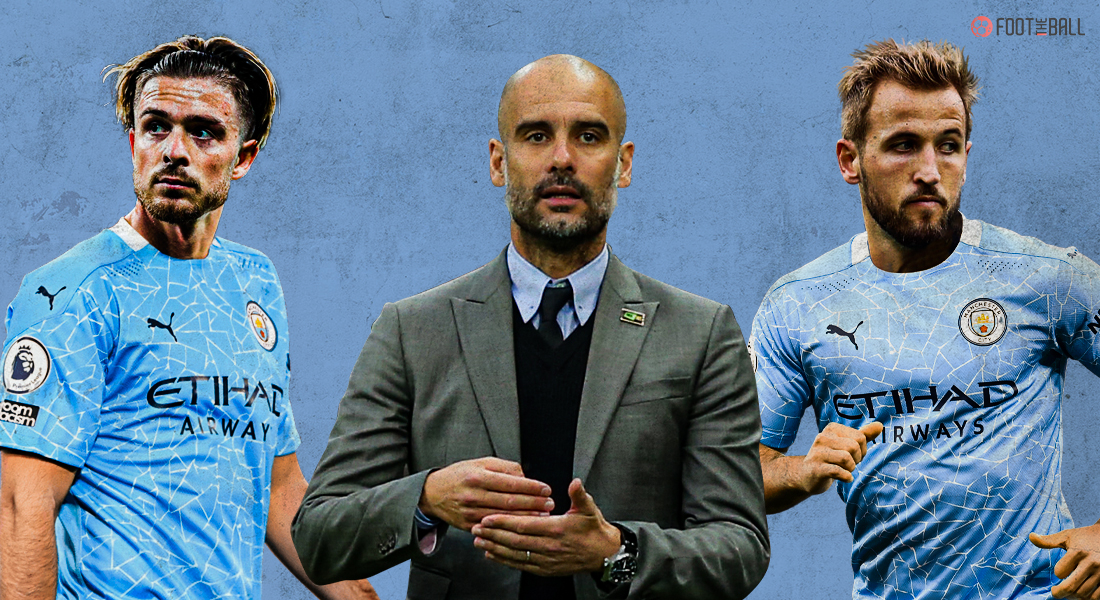 A shambolic defeat against Thomas Tuchel’s revamped Chelsea outfit once again raised a million questions on Spanish grandmaster Pep Guardiola. While the Premier League’s and Carabao Cup’s love affair with Manchester City continued, Guardiola’s prized possession, a Champions League trophy hasn’t landed in England. That 1-0 loss had already indicated towards a squad overhaul at Manchester City and Pep Guardiola is prepared for it.

With the other colleagues in England earning the silverware’s presence in their club’s trophy cabinets, Pep’s dream of being crowned the Champions of Europe has to wait once again.

Guardiola has once again resorted to his old tactics of spending millions and millions in the summer transfer window. With two English giants Jack Grealish and Harry Kane up for sale, Manchester City’s 100 million bids have paved the roadmap for Europe for Pep.

WHO ARE THE BIG FISHES?

A household name in the Premier League, Jack Grealish’s astounding impact for Gareth Southgate’s Three Lions has been astonishing. A world-class midfielder, Grealish’s manoeuvres are worth keeping an eye on. Villa Park’s leading attraction, a big-money move has always been on the cards for the flamboyant midfielder. Carrying the ball into different spots, Grealish can locate his darting strikers and deliver inch-perfect crosses. Harry Kane, the other Manchester City target, is well aware of his capabilities.

A mouth-watering cross to Kane in the dying seconds of the round-of-16 match against Germany gifted the Spurs’ striker his first Euro 2020 goal. He wanders into open regions when he is not on the ball, garnering the attention of defenders. His colleagues acquire freedom and opportunity thanks to his intelligent use of openings. He understands how to remove markers out of the game.

With rapid spins and sprints, he often eludes his pursuers, providing him with a viable attacking weapon. Grealish can combine with De Bruyne and Bernando Silva creating a jaw-dropping midfield trio. The Belgium Red Devil’s attacking combination with the English veteran can destroy the Premier League.

While talismanic striker Harry Kane rarely needs an introduction. A poacher in front of goal, Kane finished the season as the top scorer of the Premier League along with the top-assist maker. Drifting into spaces, galloping with the ball at his feet, and shooting thunderous strikes to rattle the rivals’ goal, Kane would be the perfect disciple for Guardiola. Sergio Aguero’s departure to Camp Nou and Gabriel Jesus’ decline in form compelled Pep to travel to UCL games without a proper number-9. But with Kane’s introduction to the starting eleven, a rejuvenated City squad could reach those levels they have witnessed only in their sleep.

THE REVAMP AT ETIHAD

Pep Guardiola has an abundance of funds and won’t be afraid of spending whopping amounts of money before the next season begins. Jack Grealish’s addition will bolster their midfield and attacking strength both at once while Kane’s involvement with City could solve a long term problem.

But instead of spending 200 pounds, Guardiola should look for a cheaper option for one of them. Grealish’s knack of operating as a midfielder and a winger pillows his manifestation while Kane’s defensive abilities and work rate as a striker makes him a special talent.

But with questions being asked on Pep’s tactics and spending capabilities, a Champions League trophy at Etihad becomes a necessity. Guardiola and City managed to earn the ticket to their final but faltered because of Guardiola’s unnecessary experiments but a squad overhaul this campaign could help Manchester City.

The journey to European glory will begin with Pep sticking with one successful tactic throughout the campaign and not overthinking during the knockout stages. The introduction of Grealish and Kane would reduce the pressure on De Bruyne’s shoulders who sometimes succumbs to the opposition’s oppression. Pep’s DNA has the capabilities of being crowned champions of Europe. With Grealish being magnificent at Euros and Kane recovering his touch, Guardiola’s arsenal is nothing short of exemplary.