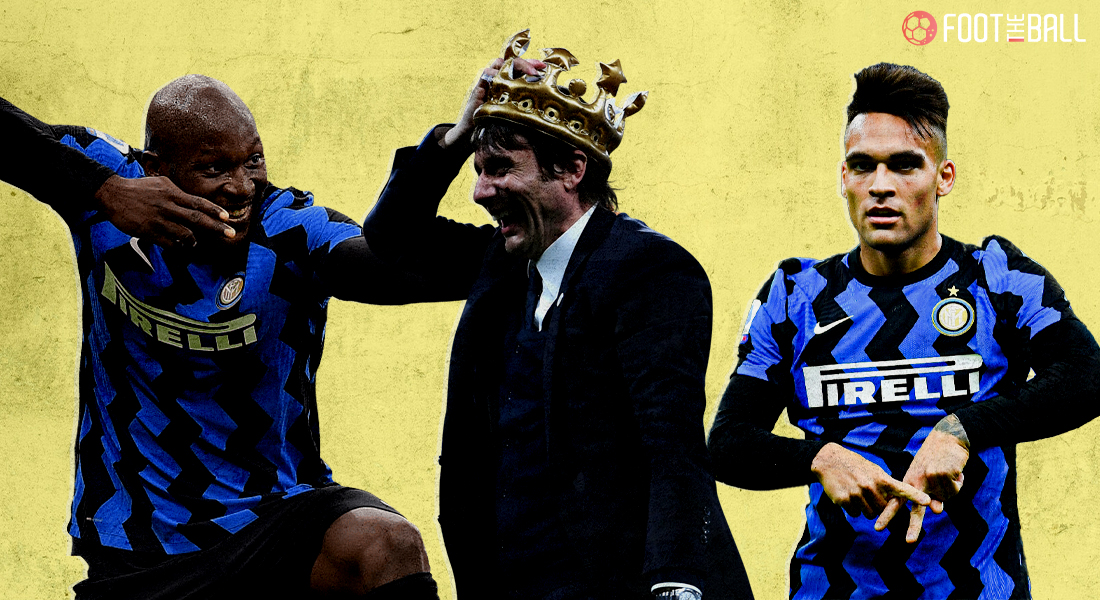 Inter Milan are leading the Serie-A by 11 points under Antonio Conte, with only 8 games to go. The Milan giants are set to end the monopoly over the scudetto by Juventus. For a club in sharp decline since 2010, appointing Antonio Conte as their coach in 2019 was the first step in the right direction.

There were many false dawns and Conte’s first season was no different. But the second time of asking, they are delivering the results. As a result, we are about to see a new scudetto winner for the first time in 10 years.

Inter made a bright start to the 2019/2020 season under Conte. With new signings, Romelu Lukaku, Nicolo Barella, Stefano Sensi, On loan Alexis Sanchez hitting the ground running along with existing talents such as Lautaro Martinez, Milan Skriniar, Stefan de Vrij. Conte implemented his famous 3-5-2 formation at the Nerazzurri and the players responded well. They stormed to the top of the table and were league leaders till the 7th game week. However, Juventus responded well and claimed the first spot post game week 8. Inexperience of the Inter players showed as they failed to grind results constantly. They were second at the mid-season break.

We can only imagine how much better that would have been with you celebrating with us at San Siro. That win was for you, #InterFans! 🤗#InterCagliari ⚫️🔵 #FORZAINTER pic.twitter.com/jPqLtFqqCT

New signings arrived in the form of Christian Eriksen and Ashley Young arrived at the San-Siro in the winter transfer window. But soon after the season sort of derailed. Falling to bottom teams and elimination from the Champions League affected the morale of players. They were never able to recover in the league and ended the season as runners-up. Europa League brought them little comfort as they reached the final where they fell to Sevilla.

Check out the full gallery 👉 https://t.co/mXuhU3kXIe

All in all, it was a learning experience for the squad. The lessons from this season would certainly help them for the next title challenge

Following the end of the season, Conte took a swipe at the Inter Milan board. He accused the board of not recognising his team’s efforts and not getting their protection. Few outlets reported that Conte was ready to leave the club. However, the club president Steven Zhang assured that Conte was committed to the Inter project and the coach too softened his stance.

Backed by the board, he signed the exciting wing back Achraf Hakimi from Real Madrid. Arturo Vidal, Alexsander Kolarov and Matteo Darmian (On loan) arrived. Now, with more time to implement his philosophy and tactics Conte’s Inter were ready to challenge for the Scudetto.

Inter had a mixed start to the season. A resurgent Milan headed by Stefano Pioli took the top spot after initial rounds. Juventus in a transitional season under rookie coach Andrea Pirlo were inconsistent giving rise to new challengers.

As the season progressed, Inter were spearheaded by attacking duo Romelu Lukaku and Lautaro Martinez. They have 43 goals and 13 assists between them this season. Chilean Alexis Sanchez rediscovered himself and made an impact in the title charge. Inter were second during the winter break.

Milan’s inexperience came back to haunt them and Inter pounced on it. They were the champions-elect as they beat or took points off all the other title contenders like Juventus, Milan, Napoli, Lazio, Roma and Atalanta. The attacking wing-backs Hakimi and Darmian were the side’s main attacking threats when the forwards had an off day. The 3 man defence of de Vrij, Skriniar and Andrea Bastoni was protected by Samir Handanovic between the sticks.

Some celebrate it today, some on July 6, but we just can't resist a #Skriniar kiss on #InternationalKissingDay 😘 pic.twitter.com/5EsBEuytV9

Inter reclaimed the top spot on game week 20 and clinged on to it ever since. Inter’s dominance was made evident as they were the league’s meanest defence having conceded only 27 goals in 30 games. They scored 69 goals and trail free-scoring, Atalanta, at the top by two goals.

Now, it’s just a matter of time before Inter gets their hands on the Scudetto. Breaking the hegemony of Juventus is no mean feat. This Inter Milan side under Antonio Conte surely did it in some style with his grit and passion them pushing them to achieve more.