Is It Coming Home? British Press Daring To Dream After Semi-Final Win Against Sweden 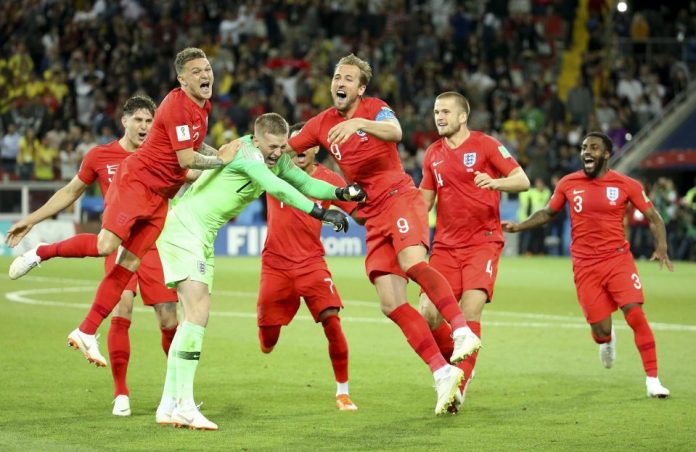 ‘It’s coming home’ has been the battle cry of England and their fans in this 2018 World Cup.

The words to the 1996 song written by comedians Frank Skinner and David Baddiel with Ian Brodie, the brains behind the 1990’s rock band ‘The Lightening Seeds’, seemed 22 years ago to capture what it means to follow an England team that would always seem to slip at the last hurdle, lose on penalties, to snatch defeat from the jaws of victory, but yet to still have hope that one day it could happen again and England could lift a major trophy.

“The 30 years of hurt” since England’s only World Cup win in 1966 have now grown to 52 years, but the feeling is back: something that didn’t look likely not so long ago.

When Sam Allardyce was sacked after just one game of the qualifying campaign for Russia and fans were staying away from Wembley Stadium rather than going to cheer on their side, nobody would have predicted England would be at the gates of the World Cup final, with just Croatia between them and a trip to the Luzhniki Stadium, but that’s what has happened, and the English press are suitably euphoric.

Baddiel even has a front-page column on the Sunday Times, saying “Yes, I dare to believe football is coming home,” with that feeling echoed all over the front and back pages as the English wake up bleary eyed after celebrating Saturday’s 2-0 win against Sweden.

The Independent, normally a paper which works to reject any kind of jingoism, cries “On Top of the World – Bring on (semi-final rivals) Croatia,” forgetting England are not actually on ‘top of the world’ they still have two steps to go…

The ‘Telegraph’ is factually more correct with a simple headline “Onwards”, while the Daily Express hits its readers with “Gareth, this was Simply the Best,” on the back page and a suitably patriotic “Happy and Glorious,” on the front.

And that brings us nicely back to David Baddiel, who sadly informs us in the Sunday Times that his guinea pig died 45 minutes before kick off on Saturday and ends with a note of caution.

“Football, especially any game involving the England team, is not a game where you should count your chickens before they’re hatched. I would advise not counting them until they have been breaded, fried and are lying in a bargain bucket,” he writes.

We have all been here before: in 1990 and in 1996. Of course on those two occasions it was Germany in the semi-finals, this time it’s Luka Modric and a talented Croatia.