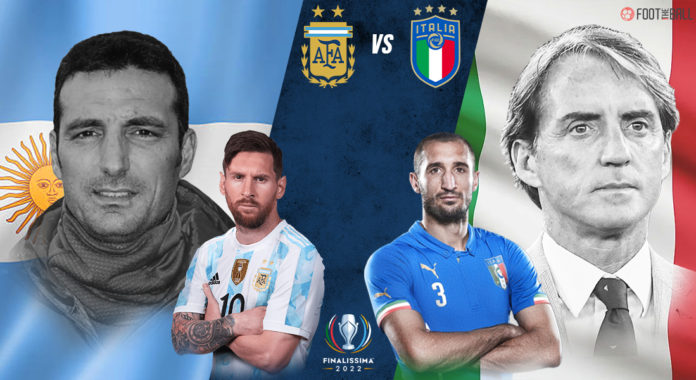 The mother of all finals in international football is here. Just three days after the grand spectacle of club football, the UEFA Champions League final took place, Finalissima is here. The word Finalissima literally means the “Grand Final” in Italian, and that name couldn’t be more apt.

It can be taken as analogous to the Club World Cup in club football. While the World Cup remains the grand showpiece for FIFA, Finalissima is endorsed by FIFA as a one-off game to crown the best international team this year.

Roberto Mancini’s Italy arrive in this tournament on the back of a shock exit from World Cup qualification. The Euro 2020 champions lost to North Macedonia in World Cup qualifiers to have the ignominy of not qualifying for the World Cup. Hence, they will be doubly motivated to get their hands on another trophy.

Mancini has played a 4-3-3 with Italy for the majority of his tenure and for a one-off game, is expected to keep things the same. The players haven’t had much time training together so both managers are likely to keep things simple and continuous.

Donnarumma is the undisputed No 1 for Italy and the reliable midfield of Barella, Verratti and Jorginho should continue as well.

For Argentina, Scaloni will also look to continue in the same vein that saw Argentina crowned as Copa America champions. Talisman Lionel Messi would be eager to add another trophy to his international collection.

The majority of their squad would be fit and firing since no player had an extended club season due to participation in the Champions League.

Argentina are expected to make this game a cagey affair, as finals often are. Finalissima is expected to be no different. Therefore, for Italy, the creativity on the ball of their famed midfield would be crucial.

The Azzurri look like a whole different beast when Marco Verratti is keeping things ticking in the middle of the park. Against Argentina’s more physical midfield, his guile and composure will be key to breaking down the opposition.

In attack, Immobile has often failed to replicate his club form for his country, but Italy need him at his ruthless best in the Finalissima.

For Argentina, it is always difficult to look beyond Lionel Messi when talking about game-changers. The Argentine maestro had an underwhelming first season at PSG. In unfamiliar surroundings, after a shock exit, Messi looked shorn of his usual confidence and swagger on the pitch. He returned his lowest goalscoring season since his debut.

Leo Messi on the #Finalissima 🗣️

However, things are different with Argentina. Messi is riding the high of finally capturing a major international trophy with his country and the more familiar atmosphere of the Argentine locker room would fill him with confidence.

In a cagey affair, expect Lionel Messi to make something out of nothing, an action that can potentially decide the fate of Finalissima.

While the two teams are quite evenly matched on paper, Italy would come into this game as wounded giants. The hurt of not qualifying for the World Cup would drive them to be at their best in this one. Moreover, the match takes place at Wembley. European conditions are more likely to suit Italy than Argentina, who play the majority of their games at high temperatures and altitudes in South America.

FootTheBall predicts a tight and nervous affair that is decided by the odd goal from a driven Italian side. Finalissima prediction- Italy 1- 0 Argentina