Mother of all finals! 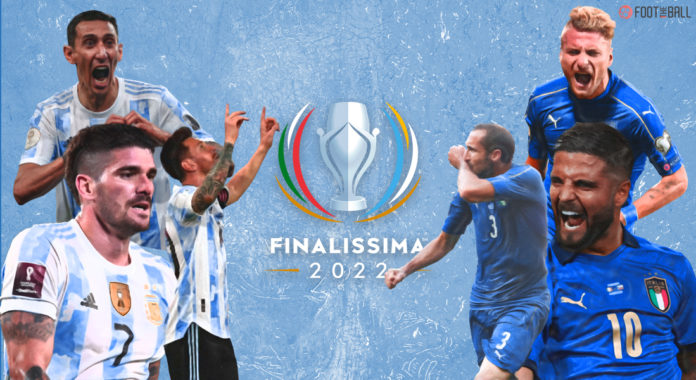 The 2022 UEFA Champions League has been talked about for many reasons. The problems with an entry before the match, Thibaut Courtois producing one of the greatest finals performances, and Real Madrid winning their 14th crown. With the end of the European league season, attention now turns to the ‘Finalissima‘ on June 1.

Euro 2020 champions Italy take on Copa America 2021 winners Argentina, played in memory of the late Diego Maradona. The match is set to be one-of-a-kind, a momentous occasion cheering the memory of Maradona and the bevy of stars on the pitch. Therefore, FootTheBall brings you everything you need to know about Finalissima 2022.

Why is the match called Finalissima?

It has been held two times before, in 1985 and 1993, with France and Argentina emerging winners respectively.

On this day in 1993, Argentina defeated Denmark to win the Artemio Franchi Cup. It was a match between the 1991 Copa America winners and the 1992 UEFA Euro winners. The match would end 1-1 with Argentina winning 5-4 on penalty kicks. Diego Maradona, Gabriel Batistuta on the team. pic.twitter.com/nmj9k2jr2d

The competition was renewed in 2020 after UEFA and CONMEBOL agreed to host this special match. The name was changed to ‘UEFA-CONMEBOL Cup of Nations,’ though it is officially called the Artemio Franchi Cup.

The Finalissima also has added significance this time, with the memory of Diego Maradona. The Argentine legend was a hero in Italy for Napoli, while also leading his nation to FIFA World Cup glory.

When is the Finalissima 2022 being played?

The Finalissima is set to be played on June 1 at the following times:

Where is the Finalissima 2022 being held?

The Finalissima is being played at the iconic Wembley Stadium, England. It is the same stadium where the Euro 2020 final happened. Additionally, UEFA announced that tickets were sold out with 86,000 capacity, meaning the atmosphere will be electric inside the stadium. However, the stadium security issue has to be looked at more sincerely, given what happened last year.

Which teams are involved?

The two teams playing the showpiece match are Italy and Argentina. It has been a mixed year for the Azzurri. Having won the European Championship for the second time, Italy were on top of Europe. Moreover, they set the record for going the most matches undefeated.

However, the happy times got over soon as Italy failed to qualify for the 2022 FIFA World Cup directly. They were made to go through the playoff gauntlet and were knocked out unceremoniously by North Macedonia. Therefore, they will miss a second consecutive FIFA World Cup.

We've waited so long for this 🏆

Meanwhile, Argentina won the Copa America for the first time since 1993. Moreover, Lionel Messi’s first major international trophy came after defeating arch-rivals Brazil in the final. Therefore, it will be a fantastic contest between two nations vying for glory again.

What does the logo of Finalissima denote?

The Finalissima has a special logo for the special match. It shows the trophy surrounded by a wreath of ribbons on two sides. One side has ribbons in the colors of the Italian flag. The other side has the same thing but in Argentine colors.

Moreover, there are ribbons painted gold and platinum, indicating the special occasion and significance. Additionally, UEFA has also said that this section of bands stresses the bonds of cooperation between themselves and CONMEBOL.

How to watch Finalissima 2022?

Finalissima 2022 will be broadcasted on all major TV channels and online. Here’s the full list:

What can be expected?

Italy and Argentina have been out of action for a few months. Nevertheless, the players have been kept fresh with constant club football. However, some of the biggest stars have had a mixed end to the season.

Moreover, Italy have not beaten Argentina in international football for 35 years. There will a lot of fanfare for this match, given it is happening in this kind of setting for the first time in a long while. It will be nice preparation for the players and the nations leading up to busy summer and year.