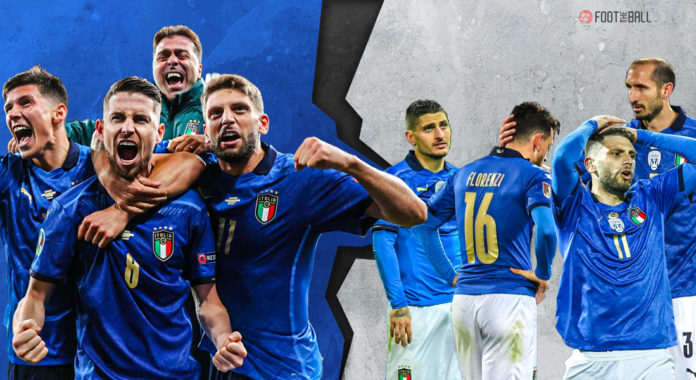 Well, how things change in a year. Back in July 2021, the Italy football team were on the top of the world. The Gli Azzurri had just defeated England at the Wembley Stadium to lift their second Euro title. This was a statement of intent from a team that had failed to qualify for the 2018 FIFA World Cup.

The Italians had been knocked out of World Cup contention in the play-offs by Sweden. However, they now had a settled team that could take them to Qatar. Unfortunately, however, they didn’t make it to Qatar. And it was more humiliating for the European champions as minnows North Macedonia knocked them out.

And any chance they had of salvaging some pride was thwarted by Argentina, who defeated them 3-0 in the Finalissima. And in a cruel sense of irony, it was at the Wembley Stadium where they suffered this agony.

So, what went wrong for the Italians?

A disaster in Palermo

When the Italy football team won the Euro last year, few people would have thought they would fail to qualify for Qatar. But on March 25, 2022, North Macedonia’s Aleksandar Trajkovski scored a stoppage-time goal to silence the Renzo Barbera stadium. The goal, a historic moment for North Macedonia, who knocked out a giant became a moment of horror for the home team.

Italy had been showing weakness as they had finished second in their qualification group behind Switzerland before meeting North Macedonia. However, they did not lose a single game but drew four. These included stalemates at home against Switzerland and Bulgaria.

And these highlighted the lack of attacking cohesion in the team. This had been a problem for several years for the Italians.

Italy scored 13 goals in Euros. Five players scored two goals each, but there was no standout performer in the attack. After topping their group, they took extra time to see off a spirited Austrian side. A 2-1 win against Belgium was followed by a win against Spain in the semi-final. However, Spain dominated the match, but Italy rode their luck to get to a penalty shootout and book a place in the final.

They followed the same script for the final, and while they were champions, there were questions over the attack, but they were lost in the jubilation.

Read More: ‘All or Nothing’: Arsenal Amazon Documentary

All through this time, Italy had remained undefeated in 37 matches, the record for international football. However, it ended with a semi-final loss in the Nations League to Spain. Back then, it had no effect as the run had been completed by a superior team and fans and pundits alike set that Italy would recover from it quickly.

But, they did not recover. Since the loss to Spain, Italy has played four competitive matches. They have drawn two and lost two (including the Finalissima loss).

Italy have now tied the record for LONGEST International unbeaten streak with 35 games.

These four matches have cost them a place in the World Cup finals and an international trophy.

In case you missed it: Who is Endrick Felipe: Player Profile

A curious case of failing forwards

Another emerging pattern is Italy’s forward failure to perform at the highest level. And it is not as if they don’t have the capability. Take for instance, Ciro Immobile of Lazio. In the last five seasons, he has scored 127 goals for his team. This has made him the undisputed striker for Italy.

But he has seldom brought these performances for the national team. The same has been the case with Andrea Belotti, who was ineffective in the Finalissima. His replacement Gianluca Scamacca didn’t fare much better.

And if the multiple trophy winner Mancini wants to defend Italy’s crown at the 2024 Euros he will have to address the core issues.

Italy’s striker woes can be gauged by comparing the stats of their Euro qualification to their World Cup qualification.

So, while the defence has been watertight, the attack has led the team down.

“We’ll have a chance to add younger players who, we hope, will have more chances with their clubs. This is crucial. There are many young players who can have the ambition to play with Italy and with a bright future ahead,” he said.

And young players will have to play a part as the old guard are slowly phased out. Giorgio Chiellini has already retired and new players must now raise their hands up to restore the pride of the four-time World Cup winners.

Maybe Mancini’s words will come true, but for now, the Gli Azzurri must introspect and heal their wounds.