The last time Italy (on a 36-match unbeaten run currently) lost a competitive match in international football, Donald Trump was still the president of the United States of America and Jose Mourinho was managing Manchester United in the Premier League. 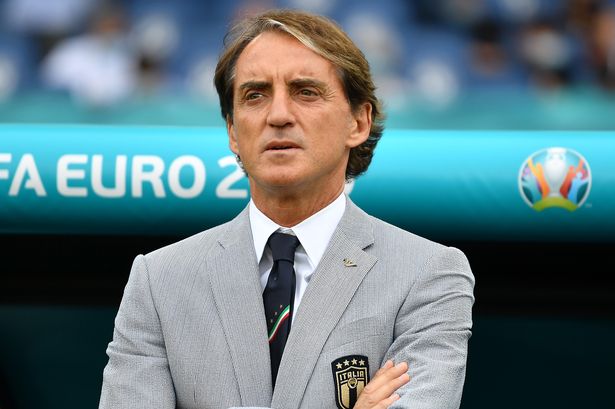 The Azzurri have since gone almost three years without a defeat in the international arena, adding a European Championship title to their kitty in the meanwhile.

As Roberto Mancini’s charges celebrate going 36 matches unbeaten after their goalless draw in Switzerland, FootTheBall takes a look at the players who lined up to start for Italy in their last defeat that came against Portugal in the Nations League almost 3 years ago.

The 22-year old Italian started in goal for Roberto Mancini’s charges ahead of the regular goalkeeper and Italian legend Ginaluigi Donnarumma that night when Andre Silva sinked the Italians in the Nations League.

Nowadays, Donnarumma is adapting to life in Paris after transferring from AC Milan to Paris Saint-Germain this summer in the wake of Italy’s triumph in Euro 2020.

The 27-year old right-back started in his first-ever match for Italy that night against Portugal when he was still a player for SPAL in Serie A. He played on the right-hand side of a four-player defence for the entire 90 minutes.

Today, he plays for Italian capital club Lazio in Rome in the Italian top-flight as a right-back and has gone on to represent Italy internationally on one more occasion.

Another 27-year old who played that night in defence alongside Manuel Lazzari as Italy slumped to defeat in the Portuguese capital of Lisbon to the eventual champions (Portugal would win the inaugural Nations League in June 2019).

Back then, he was at AC Milan in Lombardy, but nowadays he is playing for Venezzia in the Italian top division on loan from the club in Lombardy’s capital.

The then 23-year old featured in the heart of defence for Italy that fateful night, but now he finds himself the captain of AC Milan following Leonardo Bonucci’s return to Juventus.

The 26-year old has been leading the Rossoneri from the back and ensured that they finished runners-up last season in Italy.

The now 34-year old is at Genoa FC and was the only defender who accumulated a booking that night against Portugal.

He played at left-back for Roberto Mancini’s charges that night before being substituted (the only defender to be replaced in the match).

Back in 2018, Federico Chiesa was still a Fiorentina player and had not become the household name that he is today.

He received a booking that night against Portugal as the then-European champions won the tie on matchday 2 of the Nations League while playing on the right-hand side of a midfield four.

The 26-year old had then just arrived at AS Roma on loan from Atalanta and started for Roberto Mancini in the middle of the park that evening, before being substituted.

Today, he has been permanently signed by AS Roma from Atalanta when he was signed by the Italian capital club on 28 February 2019.

The Brazil-born Italian midfielder was recently named the UEFA Player Of The Year after his exploits with Chelsea and Italy in the Champions League and UEFA Euro 2020 respectively.

The Champions League winner started and played the entire 90 minutes at the Estadio da Luz in Lisbon, even though he wasn’t able to help in containing Portugal’s attacking threat.

The 32-year old completed the midfield quartet for Roberto Mancini that night in Portugal as he played on the left-side of the midfield.

Back then, he was at AC Milan, but moved to Fiorentina in 2020 on a two-year contract after his deal expired with the Italian giants.

Zaza is perhaps most remembered for his glaring penalty miss against Germany in the knockout stage of Euro 2016, but he was also present in the line-up when Italy last suffered defeat.

He partnered Ciro Immobile in attack in what was a 4-4-2 formation utilised by Roberto Mancini that night in Lisbon.

The Lazio forward completed the starting line-up for Roberto Mancini’s charges even though he wasn’t able to help his team draw level or win the match after they fell behind in the 48th minute in Lisbon.

Immobile was also part of Italy’s victorious Euro 2020 winning team and helped them win against England at Wembley in the final of the quadrennial continental tournament.

Of the 11 players who started that night in Portugal, only 4 were part of the starting line-up during Italy’s final with England at the Wembley Stadium for the Euro 2020 tournament.

These players were as follows – Gianluigi Donnarumma, Federico Chiesa, Jorginho and Ciro Immobile.

Rest of the players were not part of the squad that played in the prestigious quadrennial tournament – a sign of how much work and industry went into selecting the final squad that was able to emerge victorious in London and the credit and plaudits that Roberto Mancini and his charges deserve for achieving such a unique distinction.