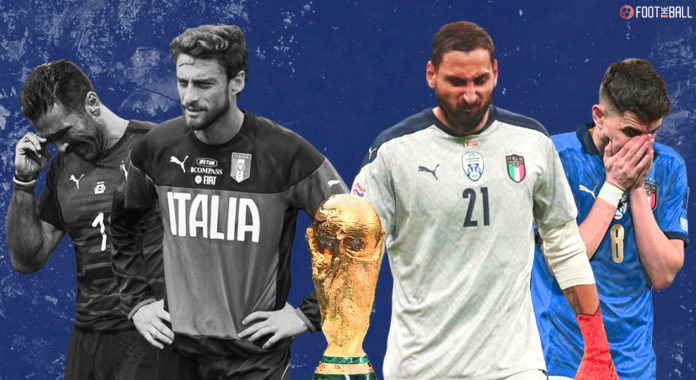 A year is a long time in football. Last year this time, Lionel Messi was dragging Barcelona to wins, Ronaldo was plying his trade in Serie A and a certain Xavi was managing in Qatar. The footballing landscape changed rapidly in a year.

Read also: The story of Xavi’s 134-day turnaround at Barcelona

How about 8 years then? Nearly 3000 days. That’s the last time reigning European champions, Italy, made a World Cup appearance.

ITALY ARE NOT GOING TO THE WORLD CUP FOR THE SECOND TIME IN A ROW! 🇮🇹❌ pic.twitter.com/tRI8WLGvSB

After a shocking upset against North Macedonio, losing 0-1 in a knockout WC qualifier, Italy won’t be seen at the World Cup till 2026 at the very least. Therefore, it bears looking at the starting XI of Italy the last time they played in the World Cup. on June 24, 2014, Italy lost 0-1 to Uruguay in the group stages. Consequently finishing third and bowing out of World Cup 2014.

There are a few last men standing, a certain bad boy still being here, and a reclamation project done right. Here is Italy’s starting XI the last time they played in a World Cup game.

Gianluigi Buffon is the first goalkeeper in history to keep a clean sheet in the Champions League in 4 different decades:

The longevity is insane. 🇮🇹❤ pic.twitter.com/AiwPwNWNRw

If there was ever a list of “Iron Men” of football, Gianluigi Buffon would be somewhere near the top. He was 36-years-old at the time of the game against Uruguay. Remarkably, he is still playing his trade professionally. He turns out for his boyhood club, Parma, in Serie B. Captaining the club at the age of 44, he still hasn’t retired from international duty. However, his namesake at PSG, Gianluigi Donnarumma is the firm first-choice at the international level now.

Part of the famed “BBC” backline of Italy, Andrea Barzagli was often the lesser touted player of the three. The Juventus stalwart hung up his professional boots at the end of the 2019-20 season, winning countless domestic titles. On the international front, he retired after Euro 2016. Barzagli has moved to a life away from football. He’s the co-founder of Le Casematte, a winery company situated in Messina, Italy. A perfect tribute to Barzagli himself, who aged like wine.

Bonucci is one of the few men standing from Italy’s last World Cup appearance. The elegant centre-back started that game against Uruguay and was called up by Italy for this international break as well. However, he didn’t make an appearance as Italy were upset by North Macedonia. Bonucci has had a stellar career, with a less than ideal spell at Milan sandwiched between being a key player for Juventus.

🎙️ #Chiellini: "This isn't the right time to say if I've played my last game for Italy."#ITAMKD #Azzurri #VivoAzzurro #WCQ

Chiellini was the unlikely news story from that game against Uruguay. Uruguay forward Luis Suarez bit Chiellini in that game, resulting in a ban for the forward. Chiellini is still going strong for the national team at the age of 37. However, there are murmurs that Italy’s failure to qualify could spell the end of Chiellini’s international career. It would be a momentous occasion if both Bonucci and Chiellini hung up their boots.

Read Also: Brothers in arms, story of Bonucci and Chiellini

Against North Macedonia, Chiellini came off the bench for the last few minutes to provide leadership and salvage a win.

Darmian was a highly-rated fullback for club and country in 2014. He started as a wingback in that game. Darmian’s career has taken quite a few turns since then. After impressing at the Euros, he was snapped up by Manchester United. However, he failed to lock down a place and was sold to Parma. He impressed at Parma, earning himself a move to Inter Milan. He has been a steady presence for the reigning champions during his spell at the club. He has won multiple silverware at the club. On the international level, he is not a regular starter anymore.

Mattia De Sciglio has been called up in the Italy national team as Di Lorenzo — who has been left out due to injury this afternoon — replacement.

Mattia de Sciglio was pegged as the future star for club and country after impressively breaking through at AC Milan. However, his career failed to take off as expected. After stagnating somewhat at Milan, Juventus snapped him up. Following a loan spell at Lyon, he has become a steady presence at Juventus, making 16 league appearances so far this season. His standing at the international level has fallen somewhat. He didn’t come off the bench as Italy lost to North Macedonia.

The “Maestro”, Andrea Pirlo was the base on which the whole Italian midfield functioned. The legendary midfielder retired from the game in 2017 to turn his focus to coaching. Always pegged as someone who’ll succeed in the dugout, Pirlo was handed the reins of Juventus first-team without any experience of management. He went on to win two titles during his single year as manager before being replaced by Massimiliano Allegri. Pirlo now awaits his next chance at management.

Verratti was often dubbed “The Next Pirlo” and remarkably, he has lived up to the moniker. The PSG player has become the fulcrum of both his national and club side’s midfield. After joining PSG from Pescara in 2012, he has remained with the French side. He has won numerous titles with PSG. However, the UCL remains elusive. He was a key cog of the Italian team as they won Euro 2020. After missing out on his second consecutive World Cup, Verratti would probably be one of the building blocks of the next iteration of the Italian team.

Claudio Marchisio was the underrated part of every team he was in. He popularised the role of “Shuttler” in midfield. Marchisio is widely credited as the reason behind the huge success of Juventus domestically and in Europe. He retired at the age of just 33, in 2021, after a short spell at Zenit. Since then, he has moved away from football. Marchisio can regularly be seen speaking up on world affairs, notably condemning Russia’s aggression in Ukraine. He also supports Juventus publicly.

Immobile is one of the few players to have started both the games- 2014 defeat against Uruguay and the WC qualifier knockout against North Macedonia. Ciro Immobile’s career has been an enigma. Despite scoring a bucketload of goals for Lazio, there has always been an expectation of wanting more from him. Following the 2014 World Cup, he was bought by Dortmund where he couldn’t impress. From there followed a series of loans before he settled at Lazio. Immobile has exploded at Lazio, recently becoming Lazio’s all-time leading scorer in Serie A.

Italian football’s favourite “Bad boy” has had a curious journey in professional football. Since starring for Italy at Euro 2012, he has seen his career in a downward spiral. However, there are signs of redemption. Balotelli was recently called up to Italy in a surprise move by manager Roberto Mancini. However, he was dropped from the final squad. Therefore, he did not play any part against North Macedonia. His club career has seen him travel to 6 teams in 7 years. He has recently settled at Adana Demirspor, a Turkish club where he has scored 11 goals in 25 games, prompting his national call-up. Could the result against North Macedonia have been any different if “Super Mario” played a part?