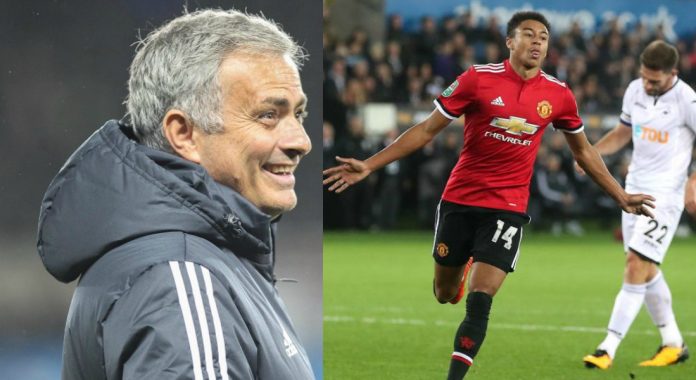 Manchester United boss Jose Mourinho heaped praise on his players and is happy to see their improved attitude in Tuesday’s 2-0 win over Swansea City in the EFL Cup.

Jesse Lingard found the net on either side of half-time to bring the defending champions back-on-track following their shock 2-1 defeat against Huddersfield in the Premier League on Saturday.

Jose Mourinho had threatened his Manchester United players that they will be playing for their futures after their shocking loss against Huddersfield and the Portuguese had made seven changes at the Liberty stadium.

And Mourinho was happy to see his players stepping up their game as Man Utd booked a place in the quarter-finals of the EFL Cup with an easy victory over the Swans.

“The attitude was very good. From the first minute we felt we were in the game,” Mourinho told Sky Sports.

“We were solid, we were compact, we were in control.

“I’m really happy because it was quite comfortable and there were no injuries, so it was a good game for us.”

Now the Red Devils will try to hold on to their form when they lock horns with Tottenham at Old Trafford in a high-octane Premier League clash on Saturday.