Final Nail In The Coffin Days after the collapse of the Super League, a defiant Florentino Perez said plans are not dead despite the withdrawal of the six Premier League clubs. However, after being hung out to dry with the backing out of ten of the founding clubs, invest firm JP Morgan delivered the Coup De Grace after pulling out  £3.5 billion funding of the proposed league.

The Premier League ‘Big Six’ were the first to withdraw from the Super League on Tuesday evening, just 48 hours after they formed half of the founding members of the new competition.

Widespread protest from fans, pundits, managers players along with the flak received on social media caused Manchester City to start a domino effect which eventually led to the remaining of Chelsea, Manchester United, Liverpool, Arsenal and Tottenham Hotspur back out. Since then Atletico Madrid and all three Italian clubs have pulled out of the controversial proposal.

Jim O'Neill to Bloomberg Television on the Super League: 'One of the most ridiculous proposals I’ve ever seen in my life… How on earth did [JP Morgan] let themselves get this proposal to where it got?' Says it 'epitomises so much that has become wrong about football'.

It takes a certain amount of character to be defiant in the face of defeat. If you thought the El-Classico was a rivalry both on and off the pitch? Think again. Real Madrid supremo Florentino Perez and Barcelona president Joan Laporta appear to the last men standing in defiance and complete faith that the Super League will return.

Florentino Perez: “The #SuperLeague is not dead, it’s on stand-by and we’ll work on the project. All 12 founder clubs signed the same contract”. 🚨

In a statement, JP Morgan said: ‘We clearly misjudged how this deal would be viewed by the wider football community and how it might impact them in the future. We will learn from this.

According to The Guardian, JP Morgan’s banker’s financial commitment to the Super League plan was primarily going towards payment of between €200m and €300m to each participating side.

JP Morgan spokesperson: We have clearly misjudged the reception of this project among the wider football community and how it would impact the future. We will learn from it. #ESL pic.twitter.com/HhAsXhEAeJ

Their statement has come just a couple of days after sustainability ratings company Standard Ethics downgraded the investment bank’s credibility rating from ‘adequate’ to ‘non-compliant after questions were raised about their integrity following the initial announcement of their backing of the Super League. 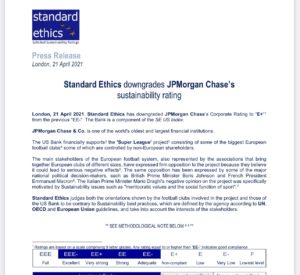 The agency cited the ‘serious negative effects of the plan on the bank as the reasons behind the downgrade, and which were all highlighted further by UK Prime Minister Boris Johnson, his Italian counterpart Mario Draghi, and France’s President Emmanuel Macron.

The move by the investment firm is sure to be a detrimental one. A lot will depend on Florentino’s Perez statement after being further dealt with this wrecking ball. Perez has been used to getting his way and has surrounded himself with yes man throughout his professional career. The murky waters that he finds himself in are unprecedented and analysing his methodology over the course of his career, it doesn’t seem he will publically concede defeat.

However, as the tide rises in with more and more setbacks by the day, it’s hard to envisage this embryo ever gaining life. Despite the football diaspora already declaring victory, the adamant and powerful supremo Florentino Perez will keep telling himself the battle is lost but the war isn’t over.