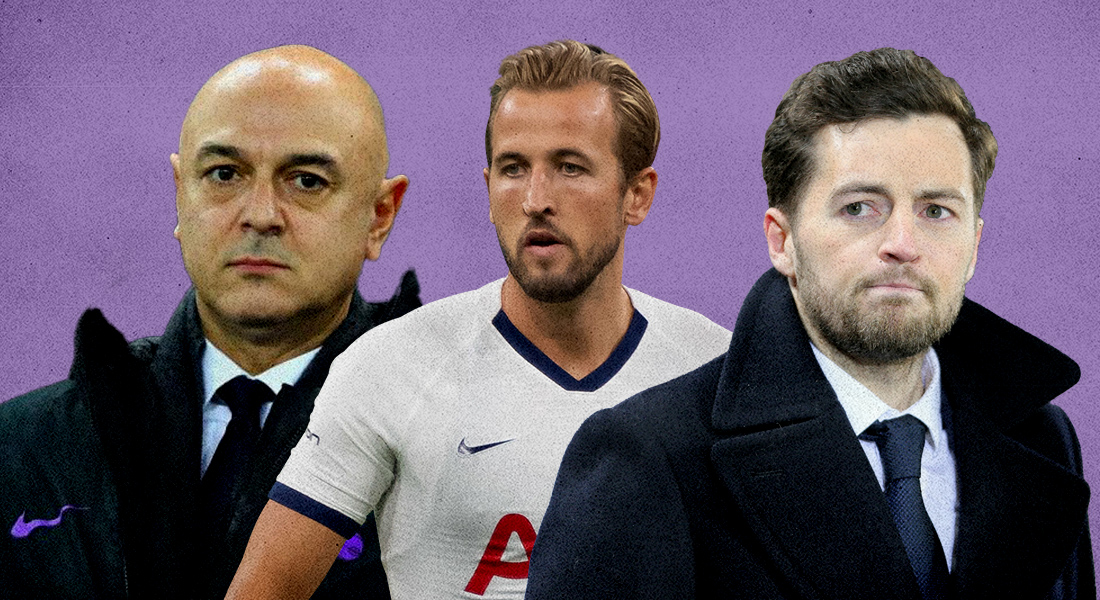 It’s the history of Tottenham. Giorgio Chiellini’s infamous words in 2018 have become synonymous with Spurs’ seemingly faltering mentality when it comes to winning trophies for well over a decade now.

Though they have a chance to change that unwanted piece of history this Sunday against Manchester City in the Carabao Cup final under interim manager Ryan Mason, it will not come easy with Pep Guardiola’s team in marauding form sitting atop the Premier League table. Then we come to their off-field issues.

Daniel Levy’s disastrous decision to enroll Spurs into the European Super League backfired spectacularly within 48 hours after angry protests across the country demanded their withdrawal. With UEFA and FIFA lashing out at the wantaway clubs, the “Big Six” in England were made to make a hasty withdrawal in the face of imminent sanctions.

With Levy regretting the “anxiety and upsed caused by the ESL proposal” but no apology, Harry Kane being forever linked with a big move away and no permanemt head coach, the question remains- where do Spurs go from here?

Daniel Levy has a stadium with no name, no permanent manager, (probably) no CL qualification and now no ESL bail out. The stakes have never been higher for the Tottenham chairman but his gambles keep failing. And there is still no apology. A piece #thfc https://t.co/dDXTgCtjNo

Former manager Jose Mourinho’s tenure ended less than overwhelmingly after a 2-2 draw away to Everton where Spurs took the lead but ended up dropping points. They have dropped more than 20 points from winning positions in the league this season, and reports had begun to emerge that Mourinho was losing the dressing room.

Though he turned Harry Kane and Heung Min-Son into one of the deadliest duos in the league, with Gareth Bale often joining from the bench, the Spurs defence continued to leak goals. His defence of his tactics after the loss to West Ham in February, where he claimed his methods are the best, made many feel that the Portuguese was out of touch with his team’s slumping form.

With growing sense of frustration around the fanbase, and Spurs having regressed to 6th in the table and out of Champions League contention for now, Mourinho was sacked with former player Ryan Mason being installed as coach till end of season. He did manage to win his first game against Southampton and will look to lift his first trophy as manager on Sunday.

👔Tottenham Hotspur interim manager Ryan Mason praised the attitude of his Spurs players in the second-half versus Southampton:

🗣”The players gave me absolutely everything in that second-half, they were fully-committed to the cause.”#THFC #COYS #TOTSOUpic.twitter.com/zaPVZymxOY

Daniel Levy is hardly the most popular in this part of town, and after his wish of taking Spurs to the Super League fizzled out in less than two days, the pressure has been ramping up on the British chairman to right the ship drastically and mend fences with his supporters. That might be easier said than done though.

Fans had showed up across the country holding “Levy out” and “ENIC out” banners in front of their stadium with several more lambasting the move on social media.

All of this goes to show that it will not be easy to get on the good books of the fans for Levy, especially if a certain someone leaves the Tottenham Hotspur Stadium…

There is a very small gathering of fans at the stadium to protest against Daniel Levy and ENIC. #THFC pic.twitter.com/ywzayD087G

Harry Kane has been Spurs’ leading man for several years now and has firmly entrenched himself in the conversation of the greatest strikers to play in the Premier League. His prolific goal-scoring has seen him win the Golden Boot twice while also helping Spurs reach the 2018 Champions League final. He is now the 7th highest scorer in the Premier League era.

There has however been fierce speculation for the last couple of years on how the lack of trophies at Spurs may eventually lead to him leaving sooner rather than later. Indeed, the news chatter has gotten ever stronger after this recent Super League affair and there is growing fear that even winning the Carabao Cup on Sunday will not be enough to hold onto their star man.

I interviewed Berbatov, Comolli + Poyet this week about 2008 – the year #thfc last won a trophy and the year they all left. Part 1/2 is the story of Berba's sale, Levy's big mistake, missing out on Falcao and why Berba believes Kane is walking in his shoes https://t.co/W8Vw0mMEPy

It is no secret that the pandemic has hit clubs hard financially and with clubs haemorraging losses, Levy saw the chance to salvage some of it from the foundation of the Super League and its huge cash inflow. Those plans are in the dust and with the club’s £1.2bn stadium incurring debts of around 700mn euros.

As uncertainty reigns on when full scale fans will be allowed back into stands, there will most likely be no large scale transfers for Spurs even if Kane were to leave at the end of the season. Though this might also work in favour of Levy as the financial strain has been felt across the globe with Florentino Perez, one of the ever present suitors, making it clear they will not be involved in any large scale dealings.

🎙️| Florentino Perez: "Not just for us, there will be NO big signings this summer, for ANY club, without the Super League." #rmalive

WHERE TO FROM HERE FOR SPURS?

Since Mourinho left, there have a lot of names thrown into the fray for the permanent manangerial role. Julian Nagelsman, Brendan Rogers, Maurizio Sarri have all been linked while even Ryan Mason might end up getting the full time job depending on results. For now, Levy has remained tight-lipped and with the Super League still fresh in everyone’s mind, he will do good not to turn the spotlight on him again anytime soon.

Whoever does get appointed will be tasked with ensuring Spurs get back into a groove of consistency for next season, able to challenge for regular European competition and at least make good progress in the cup competitions. A trophy will go a long way in gaining back the trust of the fans and players as well.