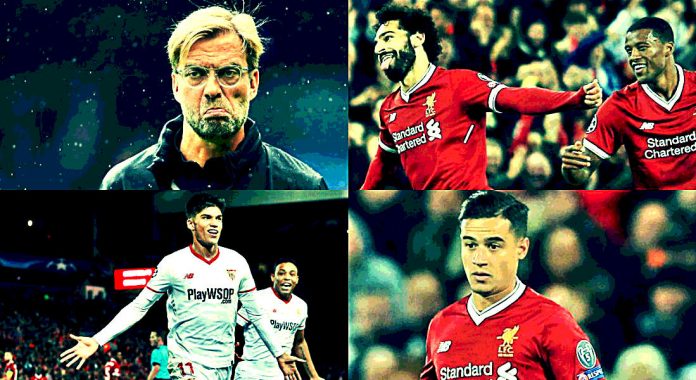 Liverpool boss Jurgen Klopp has admitted that his side need to step up their game following a frustrating 2-2 draw with Sevilla in their Champions League opener on Wednesday, but accentuated that there are plenty of positives to take from the performance.

Liverpool conceded a goal after just five minutes of their return to the Europe’s top-flight competition as Wissam Ben Yedder made full use of some sloppy defensive work from the Reds to put Sevilla ahead early on.

The Reds pounced back hard, all thanks to goals from Roberto Firmino and Mohamed Salah, but a missed penalty from Firmino proved costly at the end as Joaquin Correa capitalised upon some lack-lustre Liverpool defense to score the equaliser for Sevilla – that saw Klopp’s side failing to clinch all the three points.

“It was pretty much a winning performance for 85-86 minutes and the team played well against a side who play well. We had answers for everything apart from the goals. I have to see them again. That is not the good thing. It was an exciting game from my side, everyone saw our desire and passion but we got a point,” Klopp told BT Sport.

“We know we have to improve but there is so much potential and we can work with this. It is a draw, it does not feel too good but I am fine with big parts of the performance. It does not make too much sense to be frustrated, we have to take it. It is not what we wanted, not what we deserved. They had two chances, no more so we were the dominant side and defended well.”

“We are good in the counter-attack and it was an unlucky start for us. Things like this can happen but reaction is the important thing. We could have scored more often but if we continue playing like this, we will get points. In this moment it does not feel perfect.”