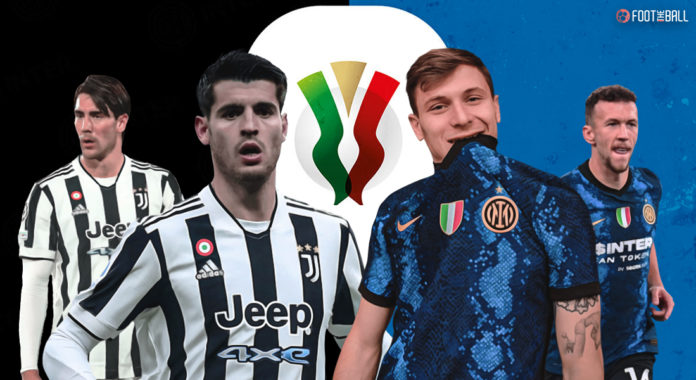 Ivan Perisic was the hero for Inter Milan as they beat Juventus 4-2 thanks to the Croatian’s extra-time brace. It was a thrilling, topsy-turvy encounter that with some excellent football played by both sides.

Inter Milan had put four past Empoli in the Serie A on Friday in the last hour and they picked up from where they left off. Simone Inzaghi’s side opened the scoring within seven minutes thanks to a moment of brilliance from Barella. A half cleared corner was recycled to Barella, who dropped a couple of shoulders to create space before firing a curling effort past the unsighted and stranded Mattia Perin.

The goal gave the Nerazzurri the upper hand as they began to dominate the ball. Juventus pressed them high but Inter were able to play through the lines with ease. It wasn’t until the defence line became more aggressive that the Old Lady turned the tide and created a host of chances after the halfway point of the first half.

First, Juan Cuadrado played in Paulo Dybala who fired straight at Samir Handanovic. The Inter goalkeeper was in action a minute later again, this time making a stunning one-handed save from Dusan Vlahovic on the angle.

Juventus started winning the midfield battles with Dybala and Federico Bernardeschi growing in influence. The latter had a well-struck shot deflected just wide by Marcelo Brozovic. He then delivered the resulting corner and found Mathijs de Ligt who met the ball well but saw his header tipped over by Handanovic.

It was from the resulting corner that Juve had arguably their best chance to equalise. The ball dropped in the box temptingly after the first header and Dybala met it on the volley. His bouncing effort though went wide and the Argentine should have at least hit the target from that range.

Inter responded to Juve’s challenge by upping their tempo and rediscovered some of the flair of the opening stages. Hakan Calhanoglu fired a shot that was blocked well before Brozovic drilled an attempt just wide. Both sides grew into the game but were unable to create more clear chances until half time.

Juventus came out of the break with renewed energy and put Inter on the back foot immediately. Massimiliano Allegri threw on Alvaro Morata for Danilo and the substitution did the trick with the Spaniard getting the equaliser within five minutes of the restart.

Vlahovic received the ball with back to goal and tried to turn but was unable to. The ball broke to Alex Sandro who drilled a low shot towards goal. Morata was stationed just in front of Handanovic and got the slightest of flicks to confound the goalkeeper who spilt the shot into the net.

Two minutes later, Juve had completed the turnaround with a lightning quick counter-attack. Morata won the ball deep in the defensive half on the right and clipped a pass to Bernardeschi. The Italian chested the ball into Dybala’s path who played a well-weighted pass first-time to Vlahovic. The striker sat down Di Ambrosio before firing at Handanovic. The keeper saved the first attempt but was helpless as Vlahvic tapped in the rebound.

The action did not stop there as Inter tried to respond. Calhanoglu was played in by a clever flick by Skriniar on the left and he crossed to the far post. Right-back Matteo Darmian met it on the volley but Perin was equal to it and parried away.

Juventus continued to find spaces as Inter chased the game and Morata had a good shot saved by Handanovic. Allegri though decided to make a conservative move, switching to three centre-backs as Leo Bonnucci came on for the rather anonymous Denis Zakaria.

Bonnucci though had the opposite impact on the game when he brought down Lautaro Martinez in the 78th minute to gift Inter a penalty. He was a bit unfortunate as there was nowhere to go but he did impede the striker and a spot kick was the right call. Calhanoglu made no mistake from 12 yards, thumping his attempt into the top corner.

Both sides seemed to begrudgingly accept the outcome of going to extra time in the last 10 minutes as neither really pushed for a winner. Inter looked the stronger in the first half of extra time, moving the ball quicker but unable to find openings.

They were soon gifted another golden chance by Juventus when de Ligt clumsily clattered into Stefan de Vrij in the box. The referee did not point to the spot but a VAR check showed that the Dutchman had brought down his compatriot. With Calhanoglu off the pitch, the spot kick responsibilities fell to Perisic who made no mistake and gave Inter the lead.

The Croatian wing-back killed off the game a few minutes later with a powerful finish. Inter countered and Federico Dimarco was found in space on the left wing. He cut a short pass back to Perisic who took one touch and arrowed in a shot into the far top corner to make it 4-2.

Juventus pumped bodies forward and had a few half chances but this turnaround was a step too far for this side. Inter saw out the game with relative ease after a hectic match to take home the trophy.

Ivan Perisic has been a reliable player for big sides throughout his career but this season, at the age of 33, he has been a shining star in this Inter side. He has been excellent throughout the campaign and has shone particularly bright in big matches. Perisic’s performance in the Coppa Italia final was truly his brightest moment.

What is more astonishing is that the wing-back is a free agent this summer. His contract ends in June and big sides over Europe should be falling over themselves for his signature. They only need have watched Wednesday’s final as evidence.

Massimiliano Allegri looked to have pulled off a tactical masterclass as he switched systems at half time and threw on Alvaro Morata to great effect. He was critical in inducing the initial turnaround but the manager’s game management afterwards was poor.

The Bonnucci substitution did not work with the senior centre-back giving away a penalty. Worse though was that the five at the back system took away Juve’s momentum and handed the impetus to Inter. Allegri’s late subs were also rather ineffectual and he will be lying awake at night today wondering what could have been.

Inter Milan may have won the Coppa Italia but the high intensity plus the extra half hour of playing time will hurt them come weekend. Inzaghi’s men are currently two points behind rivals AC Milan at the top of Serie A with just two matches left to play.

They play Cagliari on Sunday and that match will not be easy with their opponents battling relegation. Maintaining the same level of performance will be difficult for Inter. This triumph may have come at a very high cost for Inter Milan.