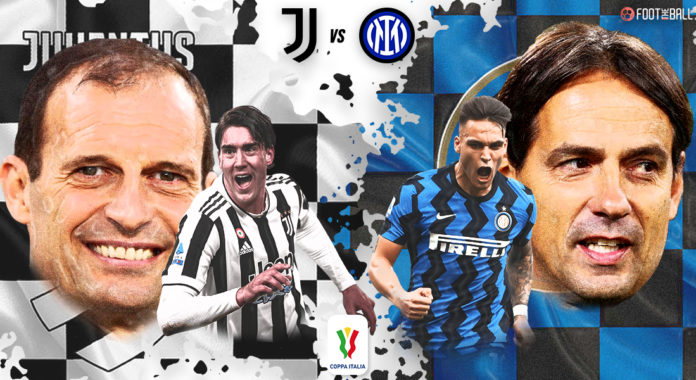 The final of the Coppa Italia pits two teams who are evenly matched in terms of star power and chances of winning.

Juventus have had a mixed season. The return of Max Allegri has gone entirely as expected. They have secured Champions League football but are 11 points behind AC Milan. Dusan Vlahovic has been a solid addition with his goals and holdup play. However, the prolific nature of the Serbian has taken a hit in Allegri’s system.

Juventus eased past Fiorentina in the semis but Inter are a different beast. The defence has to be extremely careful in not making silly mistakes. They lost against Genoa at the weekend due to a last-minute error. Last season, it was the Coppa Italia triumph that salvaged a poor season. It may well be that history repeats itself.

Inter are in the midst of a tense race for the Scudetto. They sit two points behind arch rivals AC Milan with two games left. Credit must go to Simone Inzaghi who has done an excellent job since joining last year. They lost Romelu Lukaku and Achraf Hakimi, with many expecting them to end up trophyless.

The countdown has started for the final! Let's relive our journey so far in the competition 🎬

However, Inter are still in the hunt for a double, thanks to stellar performances from Edin Dzeko, Hakan Calhanoglu, Lautaro Martinez, and others. They whacked the Rosseneri 3-0 in the second leg of the semis and are the favourites for the cup. Inzaghi has kept the fire going and established Inter’s credentials as one of the big boys. A win over old rivals Juventus will be the icing on the cake.

Federico Chiesa and Weston McKennie are out for the season. Danilo and Manuel Locatelli will be evaluated closer to the match.

Alessandro Bastoni is the only injury worry for Inzaghi.

Dusan Vlahovic has not hit the same heights with Juventus as his days at Fiorentina. There are suggestions that Allegri’s style is hindering Vlahovic. The striker is being asked to do too much work which is having an effect on his scoring. However, he remains the Old Lady’s greatest scoring threat. Vlahovic has exceptional finishing abilities as he showed in the opening games.

🗣️ Alessio Tacchinardi on Dušan Vlahović's struggles: “It's simply because of Juventus’ way of playing, the team doesn’t put him in a position to score goals at the moment. Juve don’t create chances and play badly, so the best striker in the league doesn’t get to shoot on goal.” pic.twitter.com/SK2qbp3q6H

Moreover, he is an expert in holding the ball up which allows teammates to join in. Despite being big in statue, Vlahovic can be nimble and full of tricks. Allegri will look to him for exploiting Inter’s three man defence. If he can get in between defenders and have the ball at his feet, no distance is far enough. Samir Handanovic has been suspect in goal and will need to be wary of the danger.

Fabio Miretti can start for Juventus in the final, but who is this excellent midfielder?

One of the most exciting additions last season apart from Dzeko has been the free agent from Milan. Calhanoglu is one of the most creative playmakers in football and has been on fire since joining Inter. The attacking playmaker can operate brilliantly as a box-to-box midfielder who can also drift wide when necessary. Calhanoglu’s accurate passing and set-piece expertise is an added bonus as Roma found out when he scored direct from a corner.

The Turkish international will look to target Leonardo Bonucci, given he is not the fastest and can be clumsy at times, and his track record proves he has been a menace against most other teams. If he can get a little bit of space to play his natural game and deliver some fantastic crosses, Inter will be in a good position to score which they desperately need to do

Though both teams look evenly matched, Inter hold the edge given their recent form and overall performances. Juventus will have to be careful in how they start, but have the players to hurt Inter. FootTheBall predicts a 2-1 win for Inter.