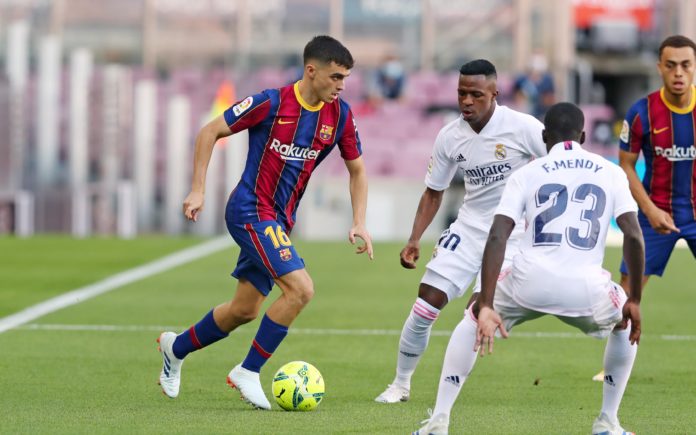 The biggest game in European football returns on Sunday as Real Madrid host Barcelona at the Santiago Bernabeu in La Liga. 15 points separate the two teams in the Spanish league, one of the widest differences in the modern era, but there is still a lot at stake other than bragging rights.

Los Blancos come into the match in great form, having won five matches on the trot in all competitions. This run includes a 3-0 win against Mallorca last time out and a hugely impressive 3-1 win over PSG in the second leg of their Champions League tie last week.

Madrid are currently 10 points clear at the top of the table and a win would all but ensure a record 35th league title.

Barcelona have also seen a superb reversal in form. They haven’t lost since January 20th and have played some scintillating football recently in wins over Galatasaray in the Europa League and Osasuna in La Liga. The Blaugrana are currently third in the table but Betis in fifth are just two points away and there is much work to be done in the race for Champions League football next season.

Madrid boss Carlo Ancelotti has a nearly fully fit squad to choose from but there are question marks over the fitness of key man Karim Benzema. The Frenchman picked up a knock against Mallorca and is a doubt. The only other absentee is Ferland Mendy who is ruled out with an adductor injury.

Barcelona have more injury issues that are only increasing with Sergino Dest picking up a hamstring problem on Thursday. He joins Ansu Fati, Sergi Roberto and Samuel Umtiti on the sidelines. Alex Balde and Ez Abde might be available again after minor knocks keeping the pair out over the last few games.

MEDICAL NEWS | Tests carried out this morning on @sergino_dest have shown that he has a left biceps femoris injury. He is out and his recovery will determine his availability. pic.twitter.com/fcemL15Fl6

For Real Madrid, the key man is going to be Luka Modric who was in scintillating form in his last start, against PSG. The Croatian has ran the show for Madrid for years and is showing no signs of slowing down. Against PSG he was omnipresent and omniscient, the second goal highlighting all his best qualities.

On Sunday he will be up against a youthful and energetic midfield that consists of Pedri and de Jong, both of whom are in exceptional form. Modric and his partners-in-crime, Kroos and Casemiro, will have their task cut out.

Barcelona’s attack has been rejuvenated since January with the arrival of a completely new front-three of Adama Traore, Pierre-Emerick Aubameyang, and Ferran Torres. The former-Man City winger started slow but has shown some really bright signs in recent weeks. Torres’ finishing has not been the best but his ability to create chances and find himself at the end of chances is very valuable.

Ferran Torres has now been directly involved in nine goals in 13 appearances for Barcelona:

Against Madrid, Torres will be up against Dani Carvajal who has not been in the best form. The Spanish winger can use his pace and tactical nous to be the outlet Barcelona need to carve Madrid open.

On paper, Madrid are somewhat the stronger side with a set plan that has worked well for them this season but Barcelona’s progress cannot be underestimated. The home side had almost a week to recover and prepare while Barcelona have a quick turn-around from their European adventures. It will be a close contest though and FootTheBall predicts Real Madrid 2-2 Barcelona.