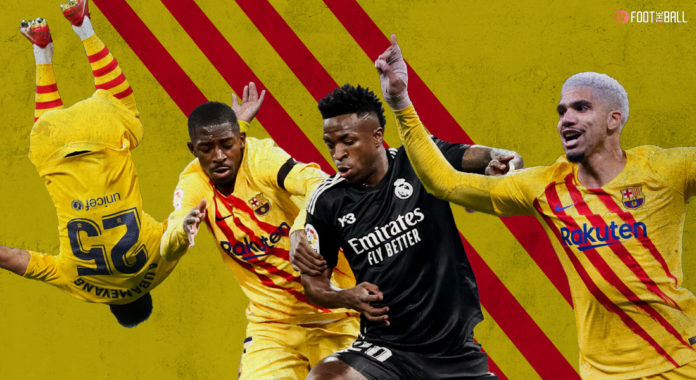 Real Madrid were demolished by Barcelona in El Clasico with a brace from Pierre-Emerick Aubameyang and goals from Ferran Torres and Ronaldo Araujo giving the away side a 4-0 win at the Bernabeu.

⚡️ @Auba the star in a big win for @FCBarcelona! 💙🔝❤️ #LaLigaSantander pic.twitter.com/CilqPGjpl9

The home side were actually quick off the blocks, creating two big chances in the opening few minutes. The first shot was fired by Rodrygo, who was played in be Fede Valverde driving from midfield. The Brazilian cut in from the right and went for the near post but his shot went wide.

Two minutes later, Madrid created an even better opportunity. David Alaba pinged a great pass through to Vinicus on the left wing. The in-form winger put on a few tricks before offloading to Valverde. The Uruguayan carefully placed a shot towards the far corner but ter Stegen was equal to it and got a strong hand to it.

Barcelona responded strongly. Sergio Busquets played a beautiful through pass to Torres on the left wing and the Spaniard cut it back to Aubameyang. The striker had more time than he thought and his first time attempt from just outside the box was saved brilliantly by Thibaut Courtois. The Belgian goalkeeper recovered quickly to punch away Ousmane Dembele’s follow up curler.

The game continued to be very open with Vinicius and Torres exchanging shots at either end. The latter had another great chance for Barcelona after some delightful play from Pedri. The midfielder turned away from his man in the left channel before chipping a pass into the box. Torres pulled the trigger but Casemiro was active enough to slide in a crucial block.

There was no last minute intervention just before the half hour mark as Barcelona finally took the lead. Pique spread the ball to the right to Dembele who found himself one-on-one with Nacho. The Frenchman turned him inside out before crossing for Aubameyang to nod it in ahead of Eder Militao.

Barcelona continued to dominate with their high press and overall tactical system looking clearly superior. Garcia found it too easy to play a ball over the top to Frenkie de Jong. He played it early to Aubameyang whose low shot was saved by Courtois.

Madrid were meek but the threat of Vinicus was always there. The Brazilian was played in by Valverde as Madrid broke on the counter. Vinicus found himself face to face with ter Stegen but in his attempt to round the goalkeeper, he tripped over the ball – a golden chance to equalise gone begging.

And he was made to pay two minutes later. Dembele once again turned Nacho around and won a corner. He took it himself, whipping it into a dangerous area for Araujo to head it in past a helpless Courtois. The Madrid defence not covering themselves in glory for that set-piece.

As the break approached, Barcelona continued to look the more likely team to add to their tally but Madrid managed to hold on to just the 2-0 deficit at half-time. The 15 minute break did not seem to change much and it should have been 3-0 within 30 seconds of the restart.

Aubameyang dropped deep to pick up the ball in midfield and Torres’ run off him was not picked up by anyone. The Spaniard’s finish though was lacking as he fired his shot wide with just Courtois to beat.

A minute later, he made no mistake, smashing in the ball into the top corner after some champagne football from Xavi’s side. De Jong intercepted the ball in midfield, exchanged passes with Dembele before playing in Aubameyang. The Gabonese flicked the ball with his heel to the left for the arriving Torres to fire home emphatically.

Things went from bad to worse for Real Madrid in the 51st minute with Aubameyang adding his second, and Barcelona’s fourth with a chipped finish straight out of the Leo Messi textbook. It was too easy for the Blaugrana with Pique playing it long to Torres who drew in the defence before letting Auba put the finishing touch. The goal was ruled out for offside on Torres but a VAR check showed that he was played onside by Alaba and it stood.

Auba should have had his hattrick before the hour mark after good play on the left-wing. Torres passed down the line to Alba who put in a great low cross for Aubameyang. The striker stretched to get there but could not get his attempt on target with the whole stadium waiting for the net to ripple.

😋 Flick and chips on the menu for @Auba tonight…

Torres was the next one to miss a good chance. Pedri, mature beyond his years, played the winger in once more in the left channel but Courtois was on hand to keep the scoreline remotely respectable with a good save.

There was no respite for Madrid as Dembele had a penalty shout in the 75th minute. The defence was wide open as Aubameyang passed to the Frenchman. Militao was all over Dembele, causing him to scuff his shot, and no penalty was a very gratuitous decision from the referee for Madrid.

Substitute Memphis Depay wanted to join in on the act, firing a casual volley from the edge of the box but Courtois got down well to get two hands behind the shot.

Barcelona have sizzled and sparkled in recent weeks with some exquisite football but there were still question marks over their ability to do it against a good in-form side. Sunday night though was an exhibition of football as imagined by the natural heir to Pep Guardiola, Xavi Hernandez.

The away side was disciplined in the press, innovative on the ball and energetic throughout the night, turning in a performance for the ages. The football was aesthetically pleasing and the goals had Cryuff’s stamp, via Guardiola and Xavi, on them.

Misfiring without the Benz

Carlo Ancelotti’s side was outplayed comprehensively on the night but one cannot help but wonder if they had arguably their best player fit in Karim Benzema. Barcelona pressed Madrid high and Courtois often had to go long with a lack of options. However, there was no presence up top with Vinicus and Rodrygo clearly unable to compete aerially.

Madrid also had a couple of early chances which they missed. The result might not have been different but the scoreline probably would have been much better with Benzema on the field.

The Future is Now

Despite the defeat, Madrid are still 11 points clear at the top of La Liga but the winds are blowing in a new direction. They will probably still win the league and are in the Champions League quarterfinals but an ageing squad and out-of-date manager do not bode well for the coming seasons.

Barcelona had six players aged 24 and under while Madrid had seven players aged 29 and above. It’s clear that the sides are headed in different directions and this may well be the morning twilight before a new dawn in Spain.