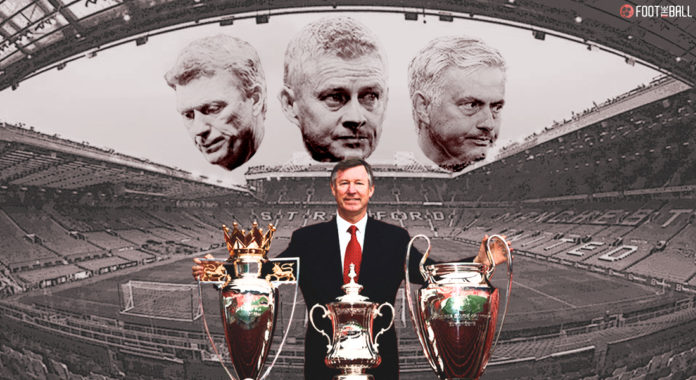 7th, 4th, 6th, 5th, 2nd, 6th and so on. These are the Premier League finishes of a team. At first glance, the numbers would make one feel like this is a mid-table PL team who had one brilliant season. However, the truth couldn’t be further from it. These are the PL finishes at Man United since Sir Alex left the club, after the 2012-12 season.

After plundering trophies like hardware in Sir Alex’s years, the club has collapsed like a house of cards in a thunderstorm. The success, which was so normalized in those years, is being looked at in new light. The scale of the job that Sir Alex did is becoming apparent. The crown jewel of that success undoubtedly remains the treble of 1998-99. It is a feat yet to be replicated by an English team.

In the 1998-99 season, Sir Alex Ferguson and his Manchester United team reached the promised land. No English club in history had ever won the Premier League title, the FA Cup, and the European Cup in the same season, and it has never been repeated to this day. Football bettors got amazing odds on this happening, and using a casino bonus would ensure not worrying about a loss either way.

The Manchester United supporters will never forget that incredible season, and the team will go down as one of the best sides to ever exist in club football. However, it wasn’t always one-way traffic during the season, as United had to fight to win each competition.

Still the only ones to do it 😤 pic.twitter.com/v5HoXUOrqW

They won the Premier League on the last day of the season, the Champions League in injury time, and although the final of the FA Cup final seemed like a comfortable 2-0 victory against Alan Shearer’s Newcastle, the semi-final was one of the most difficult ties of their campaign, when United beat Arsenal 2-1 in extra time. It was a rollercoaster journey for Sir Alex and his team, and the games were not for the faint-hearted.

How Did Sir Alex Ferguson Create a Positive Atmosphere Around the Club?

The Manchester United manager at the time, Sir Alex Ferguson, is arguably one of the greatest football managers to have ever been involved in the sport. He was incredible at managing each player and treated every individual differently. He treated everyone at the club as a family member, from the ladies serving the players food to his star players. This made everyone in the club feel they were a part of something, and it rubbed off on everyone involved at Manchester United.

With this type of attitude, it seemed his players would do almost anything for the Scot. Players who were not part of the starting eleven felt part of the team, and he knew when he gave those players the nod, they would be ready to put in 100 per cent for the team. Ferguson knew it was going to be a long season, so it was inevitable his players would get injured and suspended throughout the campaign, so everyone in the squad was going to have to play their part at some stage of the season.

We completed the Treble when we won the UEFA @ChampionsLeague on this day in 1999 – it's great to be back. pic.twitter.com/tax4MrIIga

Players like David May, Ole Gunnar Solskjaer, and Phil Neville knew they were not going to start week in, week out, but Sir Alex Ferguson had them prepared, so when their time came, they were ready to perform.

Keeping players satisfied without starting them on a regular basis is a very difficult task, and many managers have failed to do so in the past. But Sir Alex knew how to keep everyone in the dressing room on their toes, which brought great motivation and team spirit to his treble-winning side that would end in one of the most unforgettable Champions League finals of all time.

Ole Gunnar Solskjaer’s managerial spell at the club divided opinions However, his identity as a club legend for the club will never be in question. He will be remembered across the footballing world as one of the greatest substitutes in club football. During the 1998-99 season, the manager brought the striker on during a match against Nottingham Forest in the second half for Dwight Yorke. United was already leading the game 4-1, and the manager told Solskjear to keep possession of the ball. Instead, he did what he knows best and went on to score 4 goals in only 10 minutes. The game finished up 8-1 and Solskjaer was awarded the match ball.

Ole Gunnar Solskjær scores 4 goals in the space of 12 minutes after coming as 72' substitute, 1999. pic.twitter.com/pI0HrR9ocE

Substitutes knew they could be given the call to play at any time during the game, and Sir Alex was not afraid to give young players from the youth system a chance to play on the big stage. Players like Solskjear would study the games as it would unfold, and he would look for areas where he could attack the ball before getting on the pitch. He was brought on late during the Champions League final against Bayern Munich, and once again he scored.

Five minutes before the Norwegian scored, United were trailing 1-0 to the German side, but another substitute, Teddy Sherringham, scored the equalizer for United. There were many who didn’t believe United had a chance of coming back. However, the manager had instilled a ‘never say die’ attitude which helped the Red Devils get over the line. That goal helped his side win their first European Cup since 1968 when Sir Matt Busby’s Manchester United side won it.

United were facing a big problem going into the final. They were without key players and the German side looked to take advantage, especially in the midfield area. Roy Keane, United’s captain at the time, picked up a yellow card against Juventus early on in the second leg in the semi-final.

However, the captain went on to score a very important goal in the tie and after the game won the Man of the Match award to help United book a place in the final. Roy Keane’s midfield partner, Paul Scholes also picked up a booking in the same game, so he was also out for the final.

Once again, Sir Alex Ferguson had to put faith in a squad player, and Nicky Butt was asked to start the European cup final alongside David Beckham. Although Nicky Butt had played several games in the centre of midfield for Manchester United, and he came up through the youth system with the famous class of ‘92, he was not a regular first-team player. Beckham had played throughout the entire campaign but on the right side of midfield. The two struggled at times during the game, but United went on to achieve glory.

In the modern game, a lot of players don’t have the same respect for their managers as they did in the 90s. With agents playing a major role in the players’ lives, and social media growing in popularity, players are known to complain when things don’t go their way. In United’s treble-winning side, it seemed like every single person in the club was focused on United succeeding.

Sir Alex Ferguson's record in the Premier League is a joke.

No one comes close. Greatest manager of all time. 🐐 #mufc pic.twitter.com/Oi5Cypwoag

A lot of United fans feel they took Sir Alex Ferguson for granted and realized the incredible job he did by keeping everyone in the club happy when he decided to call a day on his managerial career. Managers who came in after him struggled to create a similar Unity, and the Red Devils suffered both on and off the pitch. Even Ole Gunnar Solskjaer, taking over from Jose Mourinho, tried to follow in Scot’s footsteps by replicating a similar attitude and mindset in his current side. Ultimately, he failed to do so as well. Ralf Rangnick is similarly struggling right now. The respect for the job Sir Alex did at the club only grows with each failed managerial appointment.