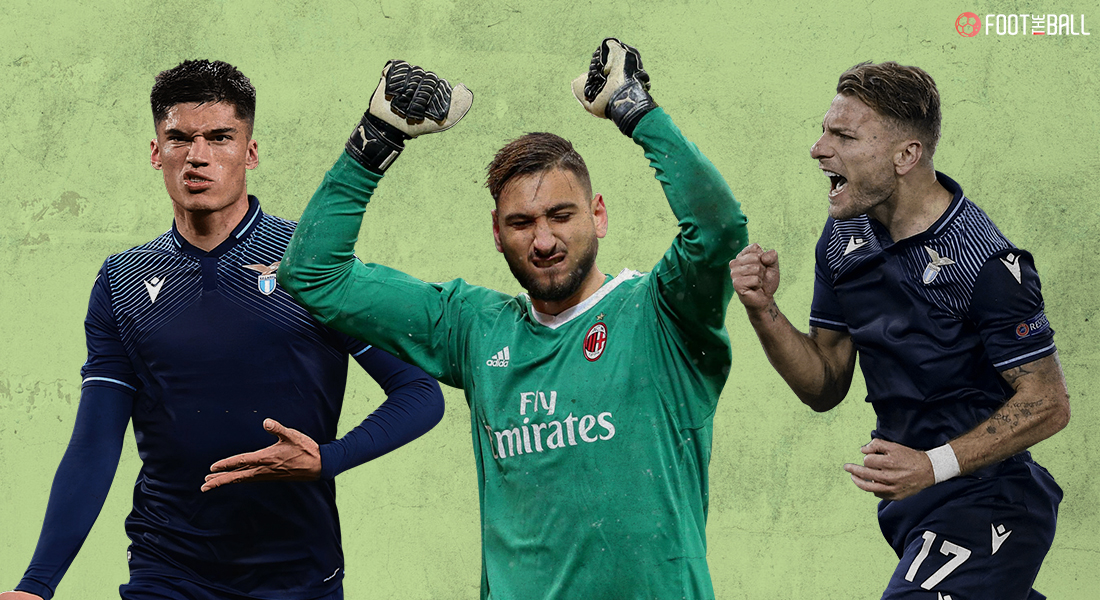 Lazio scored early on in the game and kept their lead despite looking vulnerable during certain parts of the match. A brace from J. Correa and a late finish from their main forward Immobile sealed a victory against AC Milan. Milan desperately lacked the presence of their Swedish superstar, Zlatan Ibrahimovic. Had the Swede been fit, the game may have ended in a different direction. Mario Mandzukic and the rest of the cavalry did not find any luck against the experienced 38-year-old in Lazio’s goal.

Defeated at the Olimpico.

Gianluigi Donnarumma, the visiting goalkeeper, however, had a disappointing evening. The usual outlandish saves of the number 99 seemed to have run out of stock in this match. Three incredible efforts from the forward duo saw Donnarumma scramble the ball out of his own net. The defensive support in front of him was of little use either. Prone to counter attacks, the Milan team should have learned from their mistakes in the early minutes of the game. The match ended Lazio 3-0 AC Milan.

The Argentine, Joaquin Correa will have a night to remember after his spectacular performance against AC Milan, as predicted by FootTheBall. Two wonderful goals that would have definitely put the fans on the edge of their seats. Had the stadium been full, Correa would have got a standing ovation for his efforts.

The game kicked off and just seconds into the game Milan forced a save from Pepe Reina. Calhanoglu and Mandzukic exchanged quick passes before the former took the shot from the edge of the box. A minute later and Milan find themselves on the receiving end. Correa pounced on the ball after a loose touch from Bennacer, then does a quick one-two to run through on goal. One-on-one with the keeper, he kept his cool, dropping his shoulder to leave the keeper grounded, rolling the ball around Donnarumma and tapping it into an empty net.

The second half, much like the first kicked off on the attacking foot. Milan went in trying to clinch the equalizer, but they clearly did not learn from their mistakes. The home time once again scored from a quick counter-attack. Luis Alberto dribbled across the ground to feed it forward to Correa.

The striker took a moment to weigh his options and made his mind up to beat the defender Tomori. And beat him he did. With good feet to keep the ball, Correa thumped his effort from the right side into the roof of the net. This time, the keeper captain stood no chance, another brilliant goal from the Number 11.

The Video Assitant Referee was brought in to assist the on-field referee for a much smoother and consistent decision-making system. On the contrary, the VAR seems to slow the game down, frustrate players, fans and managers alike. No decision is absolutely clear and the wait that goes into pondering the clarity of these decisions kill the joy of the game. Who decides offsides and who decides what is clear and what is not? As for now, we have to deal with this absurd reality.

The first half saw a combined sixteen attempts on goal with Milan leading the stat. After the first twenty minutes which saw Lazio attacking with potency, Milan took over. The Lazio players settled to see their lead through till the break. Just past the forty-minute mark, Donnarumma found himself 1-v-1 with an attacker and once again he was beaten. Manuel Lazzari slotted the ball past the Milan captain, but his effort was in vain as a controversial offside decision by the VAR ruled off the goal.

The second goal was crucial to the tie, and it was controversial too. VAR once again intervened after the goal was given by the on-field referee. Calhanoglu was taken down on the edge of the Lazio box by Lucas Leiva seconds before Lazio broke to find the goal. After a lengthy check, the referee made his way to the screen on the sideline and decided to stick with his initial decision, much to the relief of the home side.

IMMOBILE IS STILL IN THE RACE

Inzaghi made his first change in the 68th minute, taking the captain, Senad Lulic off for Salim Fares. Shortly after, Correa, the man who scored the brace, was taken off. Three minutes left for the end of normal time and Immobile made sure AC Milan have no way back into the game.

A bullet effort from the veteran striker saw Donnarumma once again hopeless. Lazzari was the one who fed the goal this time, a classic run from the wide man to tee up Immobile. The number 17 took the touches he needed before arrowing it across the goal on the left-hand post. He now has 18 goals in the league and has helped Lazio clinch sixth spot, just below Milan with a game in hand.