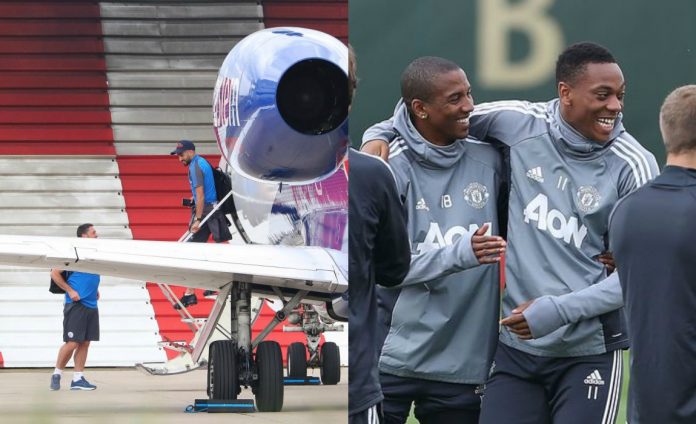 Leicester wasted no time in getting to Manchester ahead of their clash with the Red Devils… by taking a 14 minute flight.

The Foxes take on Jose Mourinho’s unbeaten side at Old Trafford in the late kick-off on Saturday.

But instead of taking the 125 mile trip up the M6 or the two hour train journey, Foxes boss Craig Shakespeare obviously thought time was of the essence.

His side boarded a private jet that left East Midlands airport on Friday.

And they would have barely had the chance to sit down when they arrived in Manchester Airport just a short time later.

Riyad Mahrez has been heavily linked with a move to Roma but looked in good spirits as he stepped off the jet.

The Algerian international has started the season in typically fine form but that has only sparked further interest from the Serie A side.

It seems Leicester will be rewarded for their resolute stance in not cashing in as it appears increasingly likely he will remain at the King Power.

But the same can’t be said about midfielder Danny Drinkwater.

SunSport revealed that Chelsea are ready to step up their interest in the England international by launching a £32million bid.

With time ticking on the transfer window, which shuts next Thursday, Blues boss Antonio Conte wants to get a deal done sooner rather than later.

The 27-year-old will be missing for the United clash through injury along with Robert Huth and summer signing Vincent Iborra.

Kelechi Iheanacho is braced to make his competitive debut for Leicester.