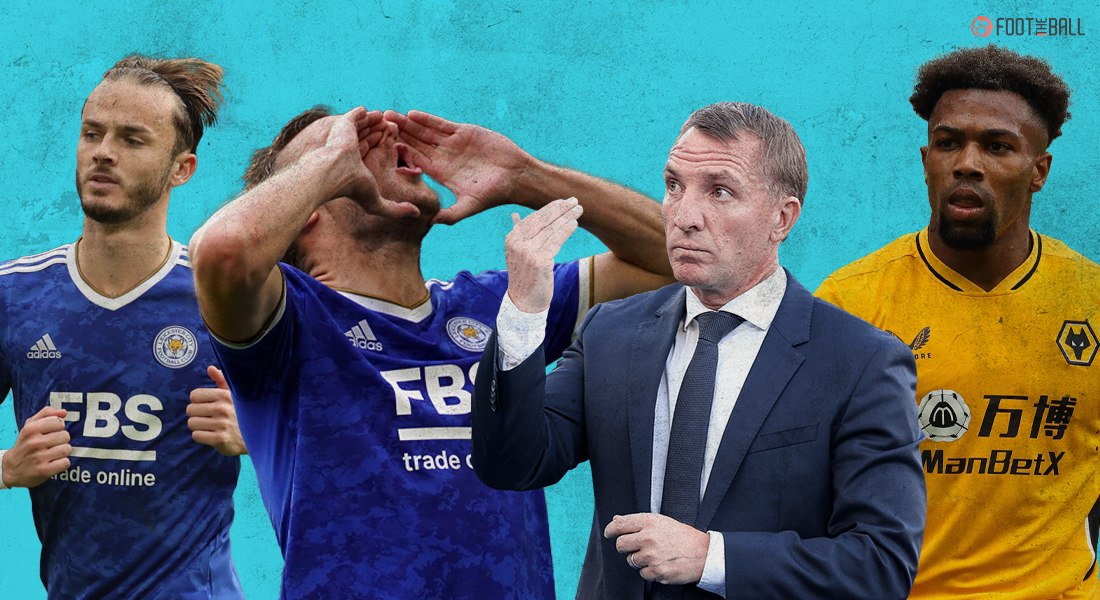 Leicester City started their new Premier League campaign with a 1-0 victory over Wolves. The foxes on the back of their Community Shield success entered welcomed their midland rivals Wolves for another midland derby. Jamie Vardy’s goal late in the first half sealed a victory for the high flying foxes.

Jamie Vardy's late first-half strike is enough to see off Wolves and start the Foxes' 2021/22 campaign with a win#LEIWOL pic.twitter.com/ozadsLjdAQ

Leicester opened the gates of King Power Stadium for fans for the first time since the covid pandemic. The Leicester crowd were buzzing to be in the stadium with Wolves fans bringing their derby flair too. This is what the game has missed in the last one and a half years.

Brendan Rodgers made only one change to the side that beat Manchester City at Wembley. Ryan Bertrand’s corona positive meant Luke Thomas had to fill in for him. Emergency signing Jannik Vestergaard made the bench after signing from Southampton recently. Other new signings like Patson Daka and Boubakry Soumare were left on the bench as Rodgers chose the safe option.

Wolves were looking like a new side with so many debuts on and off the field. Bruno Lage made his Premier League bow and gave debuts to youngster Trincao and goalkeeper Jose Sa. The like of Ki Jana Hoever returned to the defence as Lage named a five-man back. The return of Raul Jimenez bolstered their attack.

The game started evenly as Leicester took control of the ball slowly. They kept rotating it around the Wolves box probing for spaces. James Maddison was back and was fit and firing. His linkup with Jamie Vardy was a feast for the home fans. Wolves meanwhile were hitting on the break.

Adama Traore had a golden chance to put them ahead in the 33rd minute. The speedster raced down on goal with only Kasper Schmeichel to beat and placed it narrowly wide. They were punished by Leicester shortly for wasting a golden opportunity.

As we were approaching half-time, a persistent Ricardo Pereira put a cross into the box for Vardy to finish. The English forward volleyed it home to give a goal advantage for the foxes as they went into the tunnel.

There were a host of changes in the second period as Wolves tried to claw their way back into the game. Leicester handed debuts to Soumare and Vestergaard near the hour mark in an attempt to see out the game.

Just over 🔟 minutes to go on Filbert Way. Vardy's gone close once again, while Ricardo did well to block a Traoré strike.#LeiWol pic.twitter.com/GJmeHFUqyP

Adama Traore had another great chance to score but ended up volleying it straight to Schmeichel. Even Jamie Vardy had a chance to put the game to bed. Conor Coady put the ball into the net late in the game only for the offside flag to be raised moments later.

WHO ELSE BUT VARDY!

Jamie Vardy’s story is nothing short of a Hollywood movie script. The striker went from being an average non-league player to one of the best strikers in the Premier League. His goal-scoring heroics led Leicester to one of the best league titles in the history of the sport. What’s better is how Vardy has continued his consistency in the last five years as he aged like fine wine. He bagged 15 goals in the league last time.

He has come into this season with the same hunger. Vardy was making menacing runs into the inside channels and was asking for the ball. His connection with Maddison resulted in goals many times and he wanted to invoke it again. Vardy cheekily tried to scorpion kick a lobbed ball from Maddison. He also shot at goal from outside the box with his left shoot.

Those who keep trying never fail, Vardy can testify that. He was waiting like a hawk in the box for service and it came from Ricardo Pereira. The Portuguese fullback got away from his marker and sent a cross into the box. Vardy gained a yard on his marker at the near post and stuck his left foot to meet the ball. He connected wonderfully and sent the ball crashing into the net.

Anyone else think @vardy7 enjoyed celebrating in front of a packed stadium again? 😅#LEIWOL pic.twitter.com/NEB7a19XHr

A man known for his theatrics, Vardy let a howl symbolizing his opponents after scoring.

TAKE THE POSITIVES AND MOVE ON

Wolves headed into this game to kickstart a new era. Nuno Espirito Santo was an integral member of the club reaching the Premier League. He left the club last season due to differences of opinion with the board. Hence Bruno Lage, a title-winning manager in Portugal with Benfica was roped in. Lage had the entire pre-season to let his philosophy sink in.

Adama looking for a way through ⚡️ pic.twitter.com/0uLOa6iJOW

He didn’t stray far away from his predecessor’s counter-attacking strategy. Lage relatively set his side in a 5-4-1 with more emphasis on defensive wing-backs instead of attacking ones. This fell flat in the first half as Wolves didn’t utilize the wider areas sufficiently. Lage rectified this in the second half as he overloaded the wings by giving full freedom to the fullbacks.

Their wingers Adama Traore and Trincao looked more lively in the second half. fullbacks Marcal and Hoever overlapped whenever there was a chance and played crosses it. The returning Raul Jimenez looked rusty but would surely benefit from these minutes.

Though they haven’t scored, Wolves can take so many positives from this game with respect to defensive stability and playing style. A better showing in front of goal in the second game would do them wonders.

Leicester were struck a major blow in pre-season when Wesley Fofana was injured. They always had bad luck with injury problems in the last two years. It came back to haunt them again. Two of the three available senior centre-backs were injured. Till a replacement was signed, Daniel Amartey a defensive midfielder was forced to fill in at the back. Though he was shaky, Amartey did his part in holding the fort.

They defended as a unit to protect their slender goal lead. Midfielder Ndidi and Tielemans chased back every time to close gaps. Even Jamie Vardy did his share of defensive duties. The defenders led by Vestergaard were right on target when it came to defending crosses. Finally, as the full-time whistle was blown, Leicester kept a worthy clean sheet against Wolves.

Rodgers would love this kind of resilience and would want them to show this throughout the campaign as they eye for a top 4 finish. On the injury front, they can breathe easily as Timothy Castagne and James Justin might return to training soon.